Sitting alone on a bus bouncing its way down a dusty, dirt road, I awoke in the kind of mental fog only produced in circumstances of sleep deprivation and intense heat. As I slowly became more alert, I noticed my neighbour on this claustrophobia-inducing bus was male, so I began to mentally prepare myself for the questions that I predicted would follow. I knew all to well because they were the same three questions I had been answering during the months I had lived and traveled abroad.

“Where are you from? Are you alone? Are you married?”

Now to give my fellow bus rider the benefit-of-the-doubt, he meant well. He was patient while I practiced my broken Swahili and kind enough to offer me a crushed biscuit from his brown-bagged lunch. However, just as I had anticipated, soon enough those three questions broke through the ice of our linguistically challenged small talk.

“I’m from Canada. Yes, I am here alone…No, Im not married”

During these months, I realized being truthful about my single status somehow indicated my availability for a new life-partner, often instigating an impromptu marriage proposal — which of course I always awkwardly declined. I began to conjure up an imaginary husband waiting in the wings for me back in Canada — facetious proof of matrimony to avoid attracting an unwanted admirer. I even went as far as wearing a fake wedding band in attempts to publicly display just how disinterested I was in talking marriage with someone I just met at an avocado stand, while crossing the street, or in this case while stuck on a 16 hour bus ride.

I suppose you might be wondering, “what’s the big deal?”, or perhaps you might consider me to be too sensitive or oblivious to cultural differences.

Yes, I realize there are many differences surrounding courtship and marriage around the world. As travellers, we delight in experiencing and learning the many diverse layers and dimensions of culture!

My problem with these questions is not to do with any particular culture, but the fact that they seem to be an automatic reaction to a woman being on her own.

Yes, ask me where I am from! I would love to answer that. But as for questions two and three: I realized after a while that they shouldn’t be necessary. Why is a woman who travels alone equated to an object available for the taking? Must I be untruthful just to avoid an unwanted gaze or touch?

I had been lying about my marital status because it was an easy way to advert or de-escalate what I felt was an uncomfortable or potentially dangerous social interaction; a way to wade my way out of the awkward waters of my own circumstances as a female traveling alone. Eventually I realized I should not have to alter my true life story; after all, spending time in the company of myself while doing what I love to do best — exploring this beautiful world — should be comfortable and safe; it shouldn’t require divulging personal information or lying.

The truth is, my solitude does not mean that I’m lonely or antisocial, nor does it signal that I am seeking a hook-up, companion, relationship or wedding nuptials. I don’t require ‘cheering up’, so please don’t ask me to smile. I do not need (or want) anyone to intervene with a proposition or remedy for my independence.

I am alone because, like so many other solo female travellers, I choose to be.

Are you a solo female traveller who can relate? 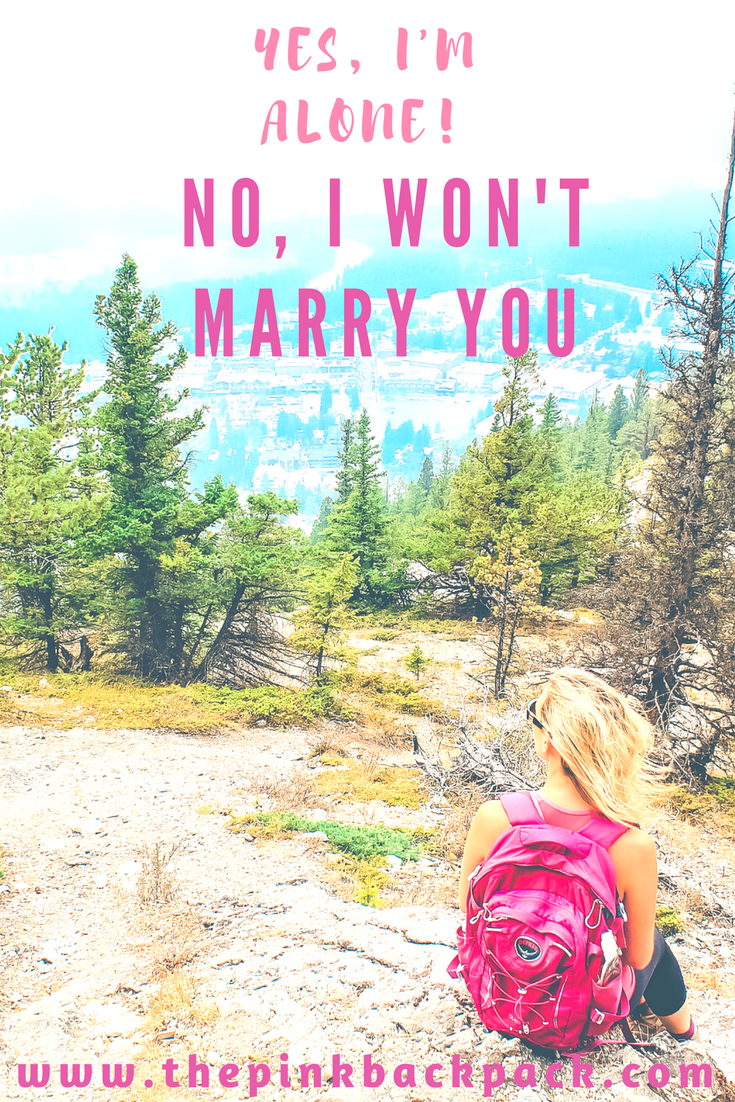 The Everyday Struggles only a Traveller will Understand

Is Social Media Ruining How We Travel?

DonNorberto said:
Thank youneed lovely reminders like this. Hugs
Emma said:
Empowering, you go girl! xx
sophie said:
Interesting post! I have encountered some situations like this.
Jen said:
I know the feeling! This happened to me so many times in Vietnam. I was travelling with my boyfriend and people couldn't accept the fact that we weren't married so in the end we just said it to shut them up haha!
Meenakshi J said:
Wow...loved this honest post of yours and the title is indeed interesting and tongue-in-cheek :) It is quite annoying when people keep speculating about the marital status when we travel...Boys/Men dont have to go through this but sadly, we women travellers need to undergo this 'Scan procedure' every single day!
Chantelle said:
Interesting post! Awkward encounters for sure and I am sure they would result in some internal conflict. On the one hand, you are in a foreign country which has different values to your own, yet on the other hand, the perception that all adult females need to be married is something we can just grapple with as westerners!
Krista said:
I can totally relate to this when traveling solo. My last big trip was a year around the world with my boyfriend so I didn't have to deal with that specifically then, but we always got the question of how long we had been together and why we weren't married yet lol.
Karo said:
I definitely have respect for you for handling this in such a calm manner and for not using a lie to avoid these situations!
Sapna said:
Many people think that if a woman is alone she is ready to mingle and looking for a man. Unfortunate. Love the title of your post :-)
sydnee said:
Love it, I don't understand why peoples automatic response to women is "your not married, or your traveling alone"
sydnee said:
Love it, I don't understand why peoples automatic response to women is "your not married, or your traveling alone"
Stella said:
I remember this line from a movie that "Solitude is different from Loneliness" so true. So what if you are traveling solo? It doesn't mean you are alone. And you being married or not does not really matter at all! Asking those kinds of questions is actually one of my pet peeves.