I had never seen a cheetah up close before. In fact, I really knew nothing about them aside from their impressive speed. In Canada, the opportunities to observe and interact with African wildlife are few and far between. Perhaps that’s why I was so interested in visiting the Ann van Dyk Cheetah Centre in the first place!

But more than that, after spending three months in Africa where I had the opportunity to learn about the wildlife, I also witnessed first hand the effects of environmental degradation. I become fascinated with animal and environmental conservation efforts. I was pleased to learn that The Ann van Dyk Cheetah Centre is one of these non-governmental organizations, where their conservation efforts to protect the endangered cheetah through breeding, research and education have held strong since 1971.

I turned up to the centre early on a chilly Tuesday morning for a tour of the grounds and to observe an interactive cheetah run. Soon we were led to a rectangular field akin to a landing strip, equipped with a motorized lure for the cheetahs to chase. As we waited for the first feline participant of the day, our informative guide debunked some myths about cheetahs living in enclosures vs. the wild.

Some people believe the centres that enclose wildlife are unethical because the environmental confines are unnatural and prevent the animals from behaving as they normally would in the wild. But despite popular beliefs, cheetahs don’t actually run for fun; they only run when they have to, which is primarily to hunt. Otherwise they can spend the bulk of their time conserving their energy, lounging around for up to 16 hours a day. “Essentially, they are lazy,” our guide said, “but to keep the animals happy, it is extremely important to continue to stimulate their minds – this is what the run is for”. 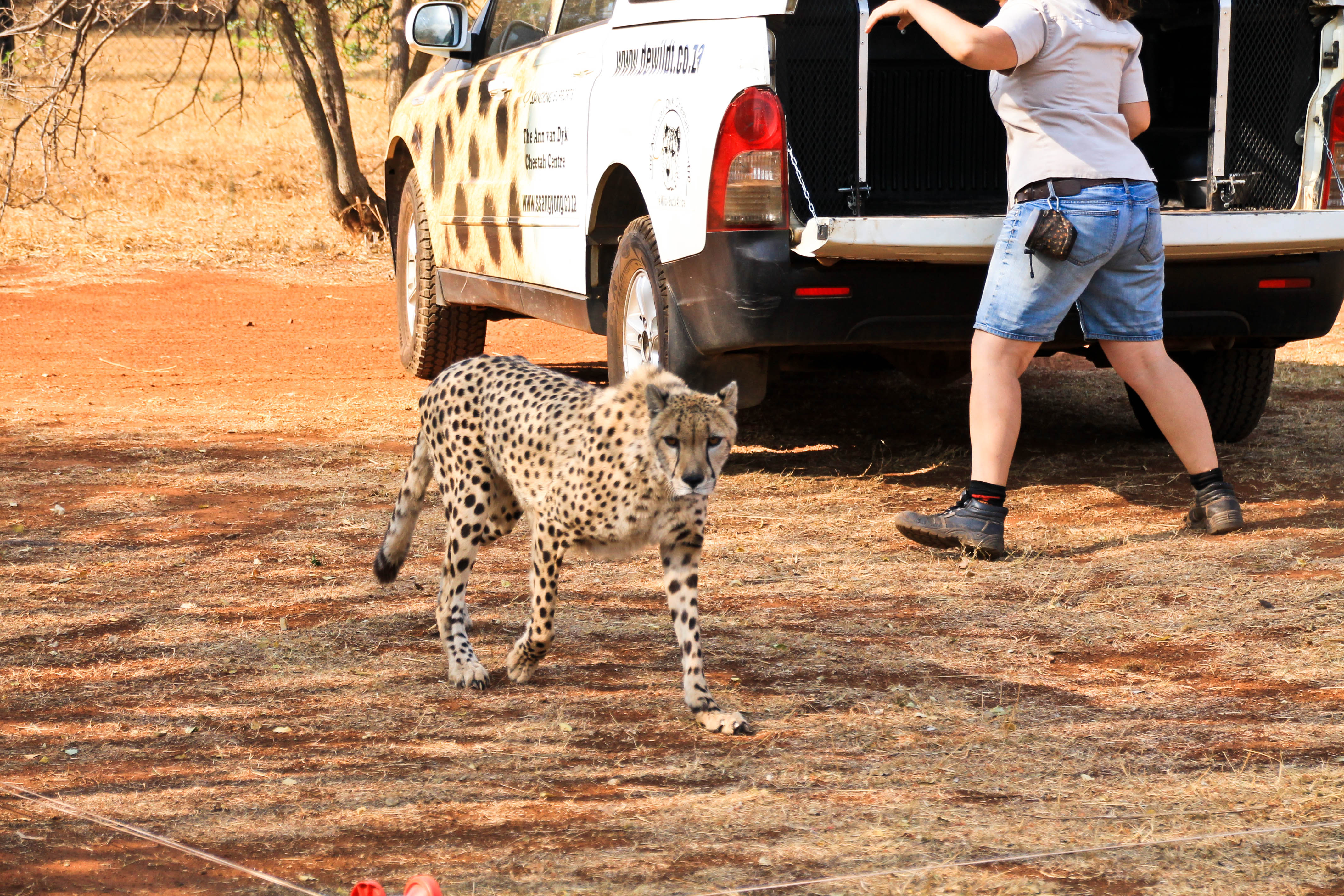 The 1st female gearing up for her run!

As we piled up behind a fence on an observation deck, the first cheetah, a young female, entered. The lure took off down the strip and with a blink of an eye she was gone, chasing it across the field and back, where she eventually caught it and was rewarded with food.

“Cheetahs can accelerate from 0 to 100km in 3 seconds”, she stated, as if to verbally explain the incredible athletic prowess we had just observed. “Cheetahs are built for speed, with longer back legs than the front, to create a spring-board effect while running; their skulls are so lightweight that you could see through the bone if you held one up to the light”. Their tail is even designed to enable them to balance and steer through turns while running!

What impressed me almost more than the sheer speed of the three cheetahs who completed the run that morning, was how incredibly gentle and calm they were around the humans leading them. Our guide explained, “these are our cheetah ambassadors”. They are used to being around humans, because the team had to intervene when they were young to save them. Either they were sick or injured and required medical care, or their mother rejected them and they required nutrition. Our guide made sure to explain to us that the vast majority of the cheetahs there would eventually return to the wild, even ones that were bred on the property – except the ambassadors. “Since we had to intervene and raise them, these particular cheetahs cannot return to the wild; they wouldn’t survive”.

Though she was clear that the ambassadors were not tame and would never lose their wild animal instincts, they were definitely more docile. Some of them played a role in breeding, a priority of the centre’s efforts to stabilize the specie. Others even visited schools in the community as part of the centre’s education projects to raise awareness in the younger generation of conservation efforts. Yeats and Byron, the centre’s most docile cheetahs often visits the kids and receive tons of love and back pats from their young admirers.

As if to prove this further, we headed to an up-close-and-personal experience to meet Byron. In a quiet room, Byron was led in and up onto a table, where he lounged calmly. I noticed he was long and lean, taking up the entire length of the table and appeared to be content, often tilting his head to make eye contact with his trainer. As I laid my hand on his soft fur, I couldn’t believe my ears – he was purring! It was clear he was enjoying the attention. I was beginning to learn that perhaps there was more to the cheetahs than what I had initially thought! 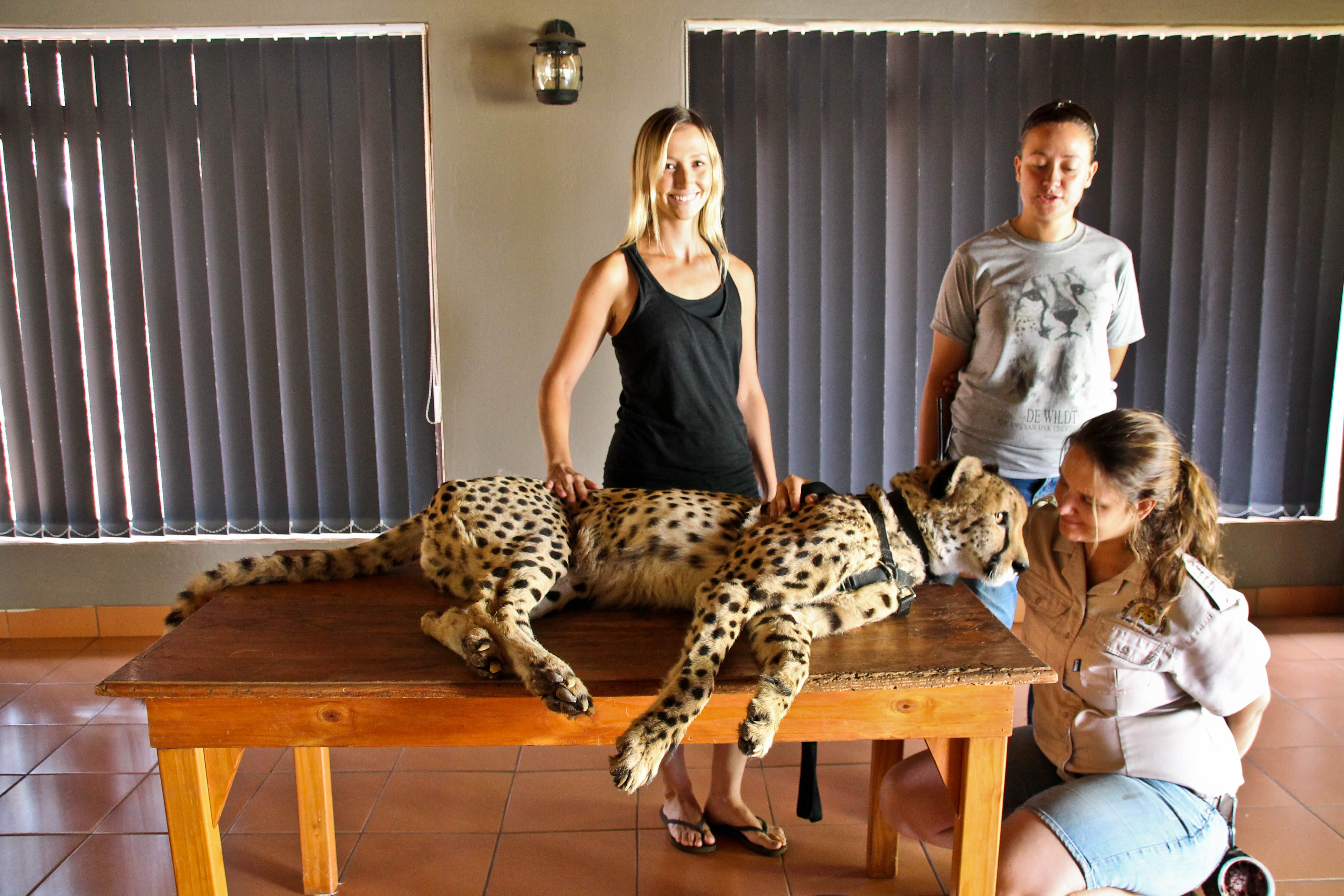 Meeting Byron! He was so calm and gentle

We continued the tour of the centre’s grounds in a truck, heading through the various animal enclosures and stopping frequently for our guide to provide information on the animals and explanations of the centre’s role in their conservation. 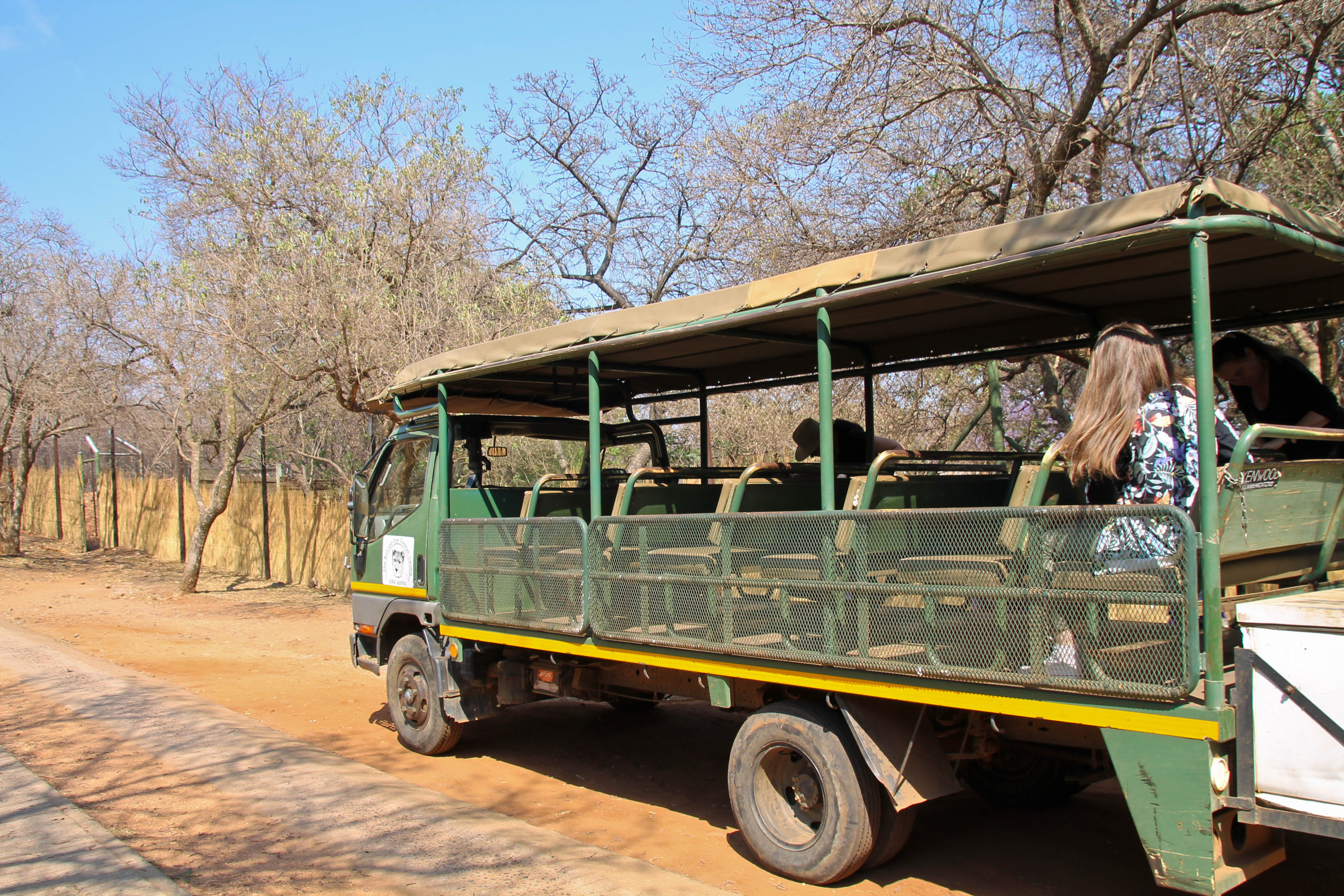 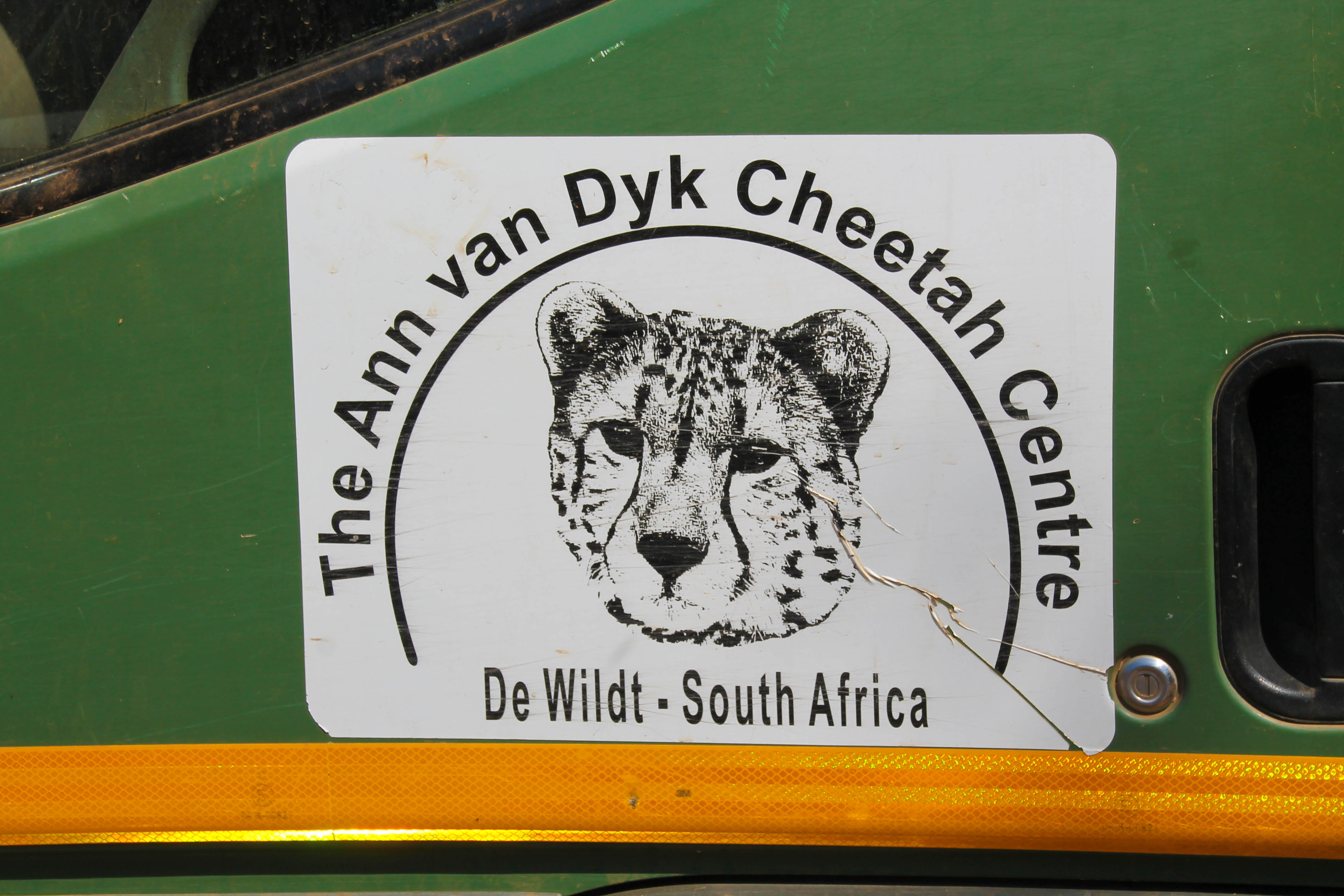 Along the way, we saw additional endangered animals including the caracal and the serval, the Egyptian vulture, the cape vulture, the blue crane and the infamous wild dogs. 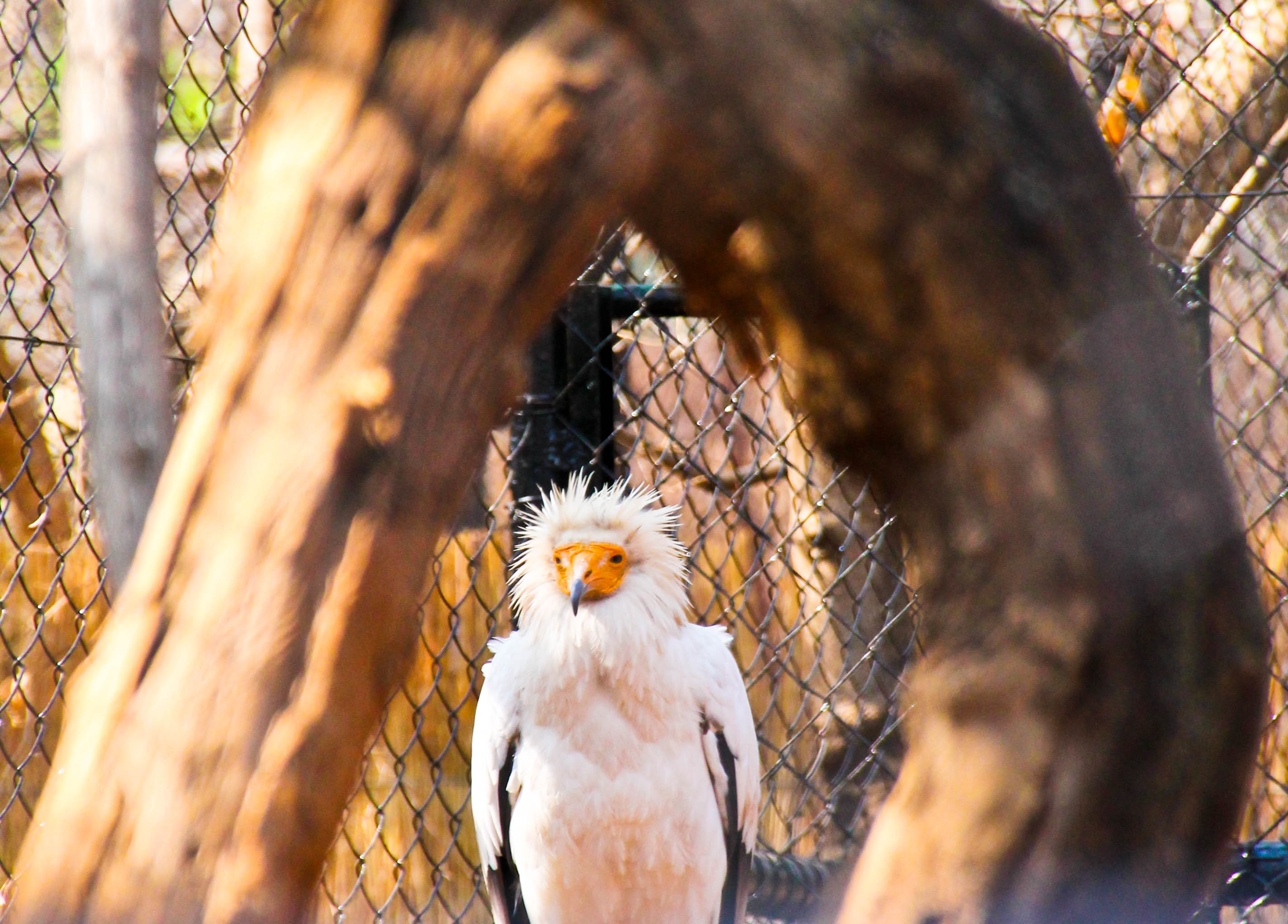 One of the many cape vultures 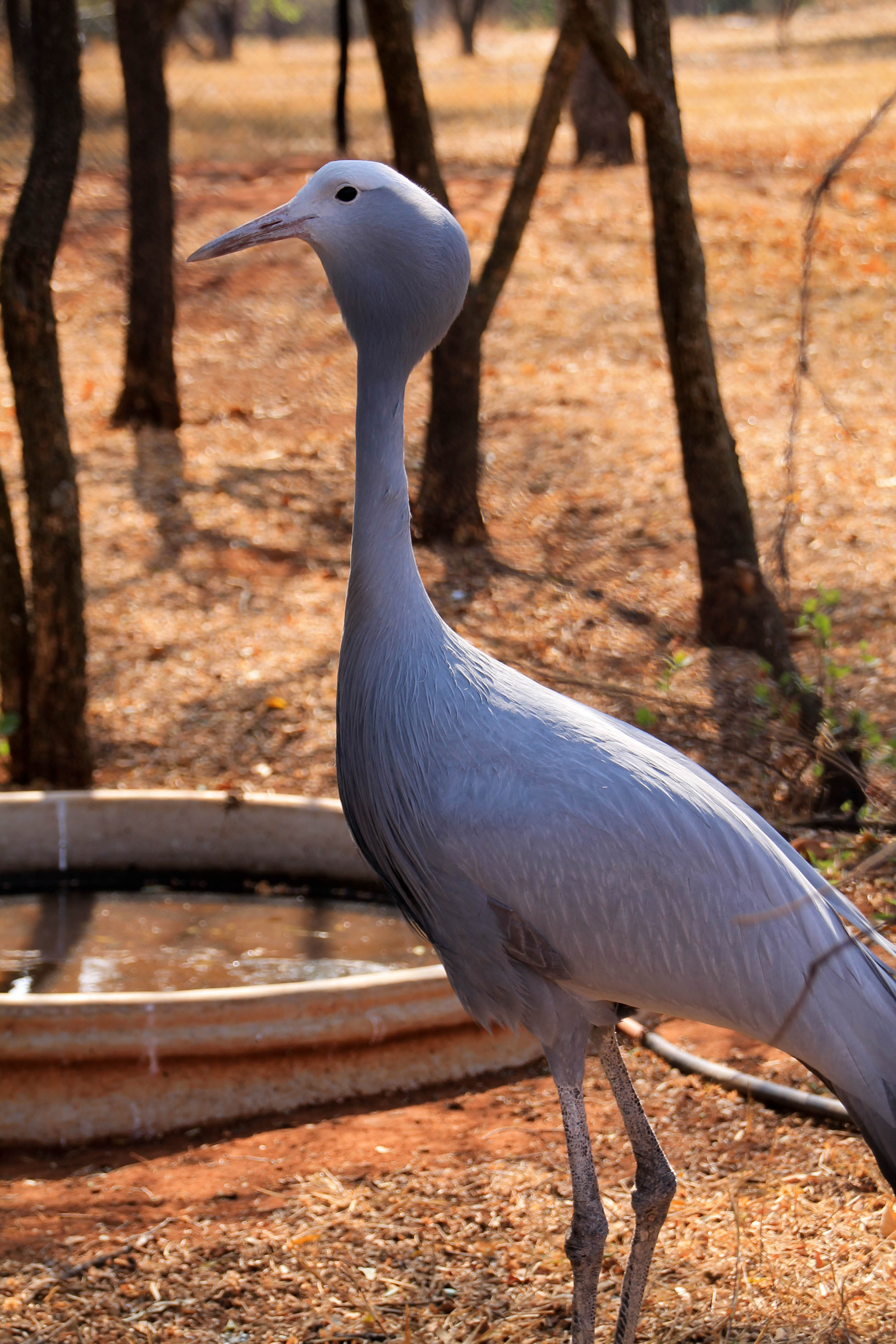 Before completing the tour, we drove through the cheetah enclosure and had the chance to observe the animals one last time and watch a feeding. 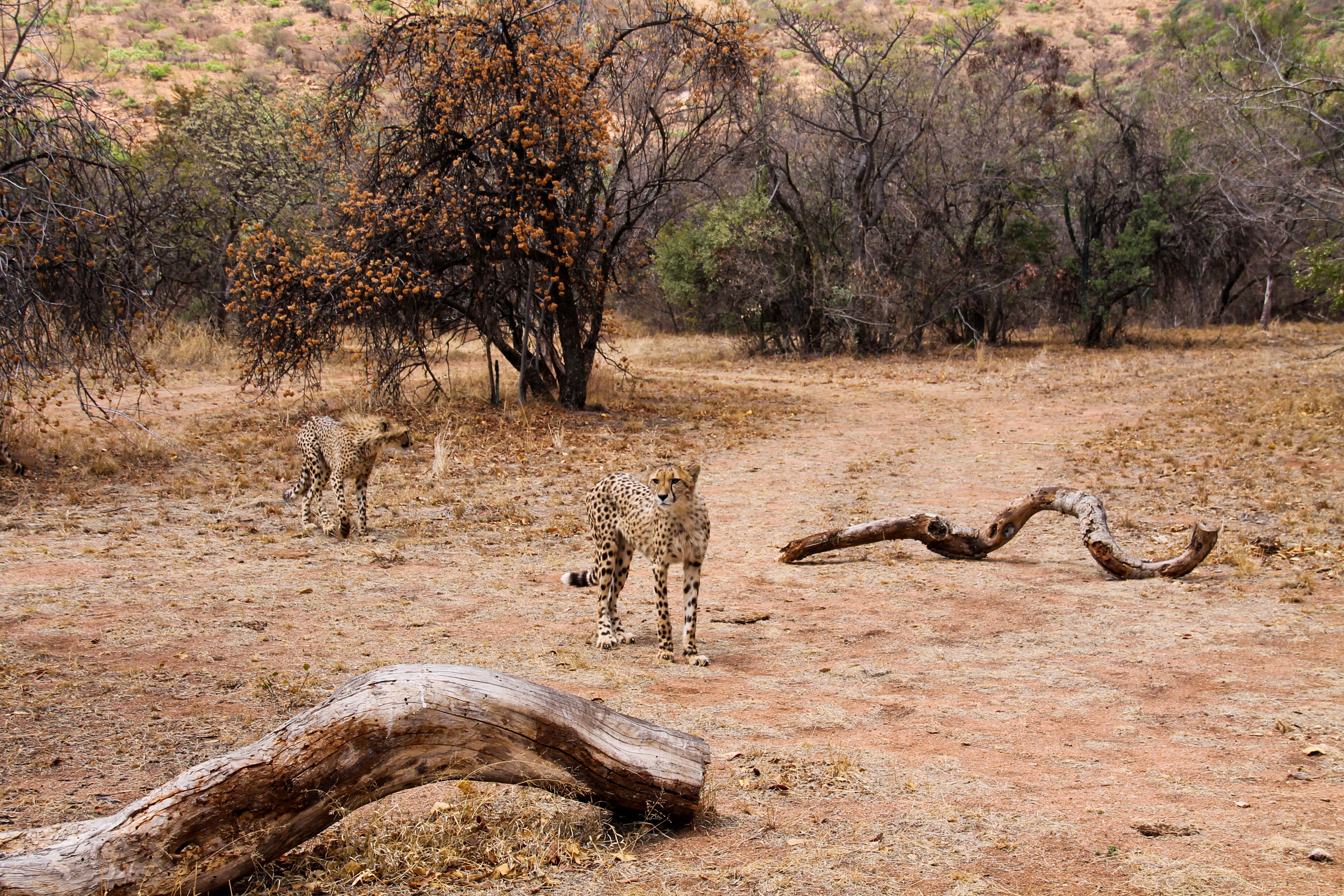 Inside the cheetah enclosure! 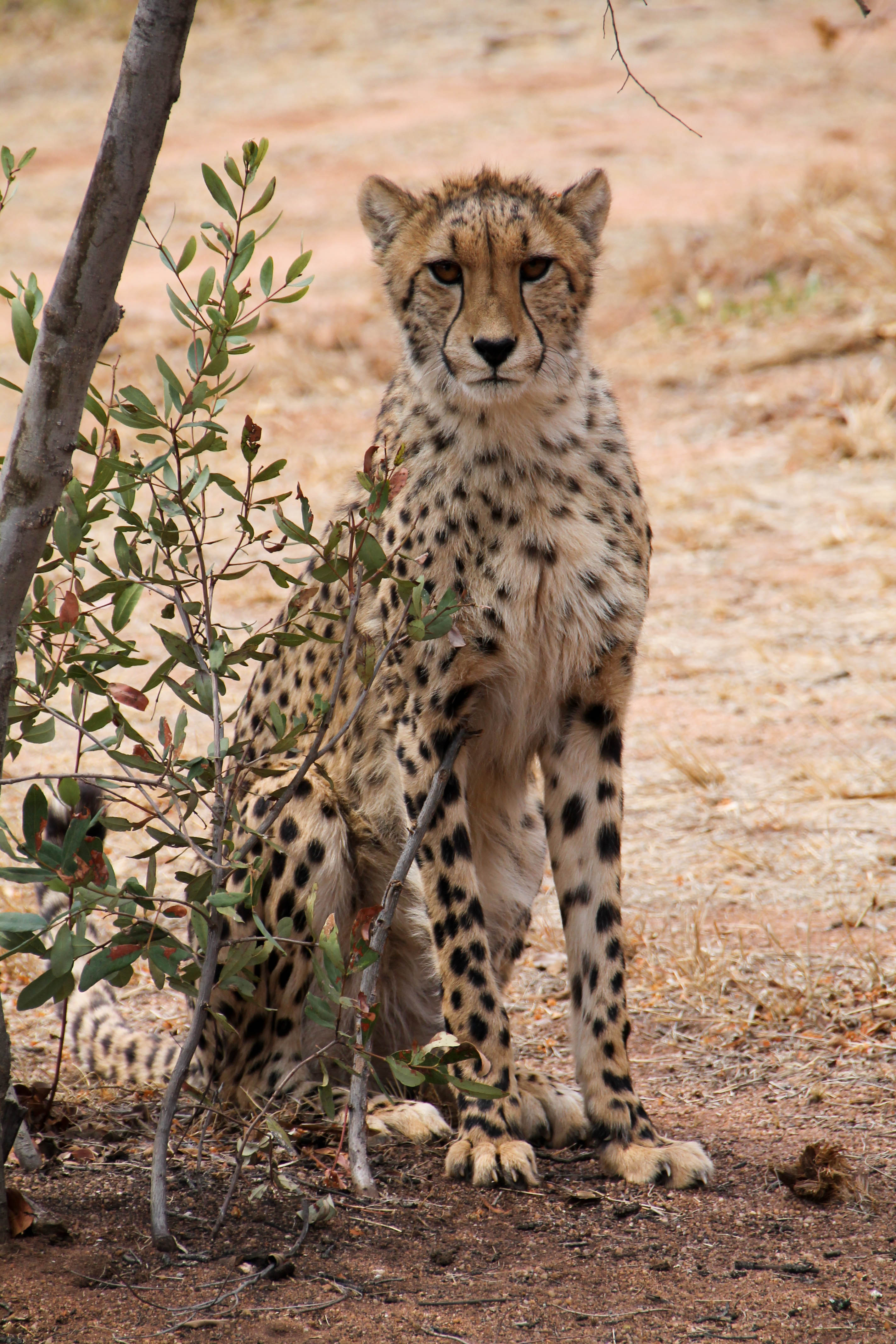 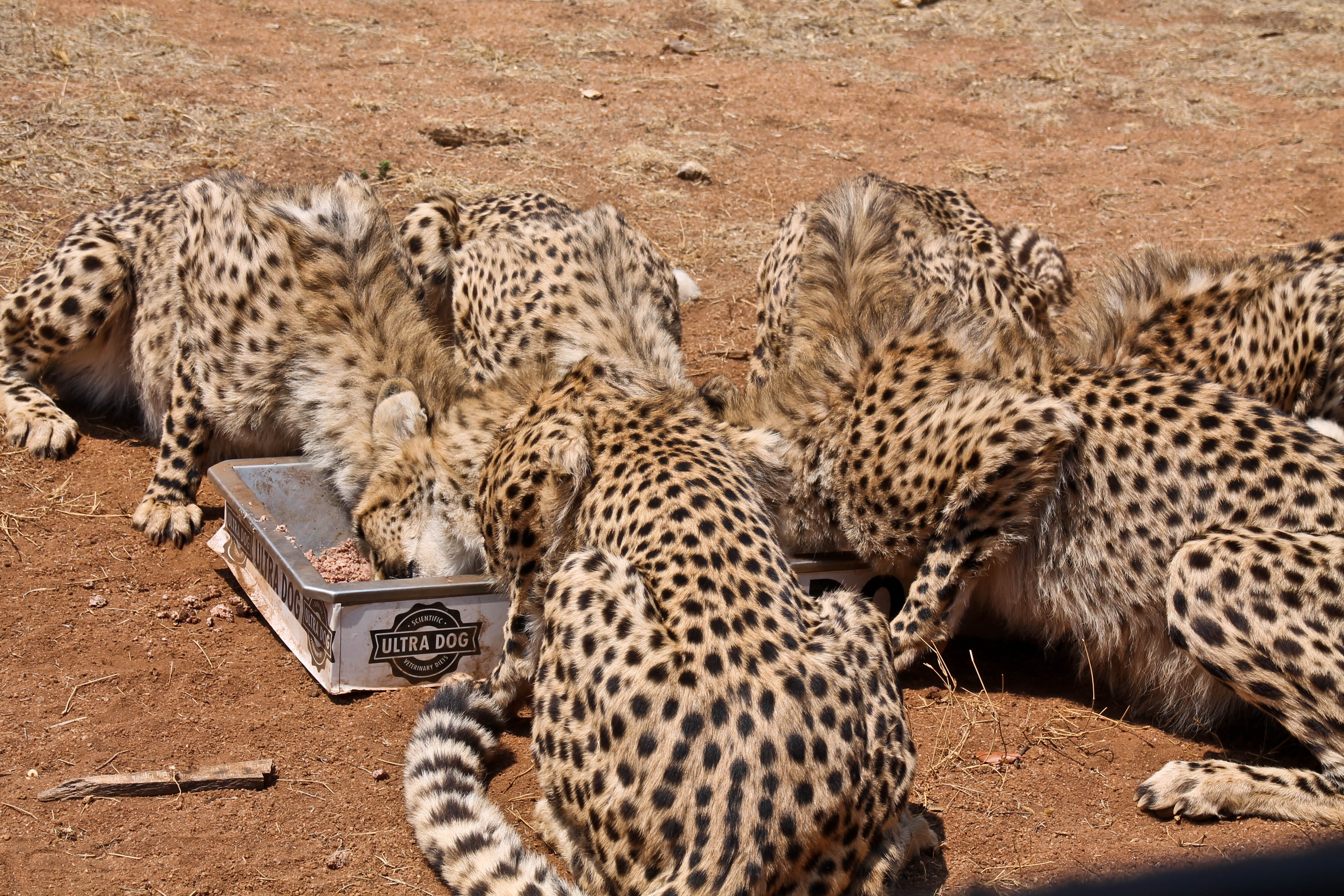 Among the cheetahs, we could note one that differed in its appearance. The “king cheetah” is a recessive gene, causing an alteration in its colouring from the traditional spots to a black strip down the back. I had no idea this even existed and it was certainly a special experience to see such a rare cheetah up close! 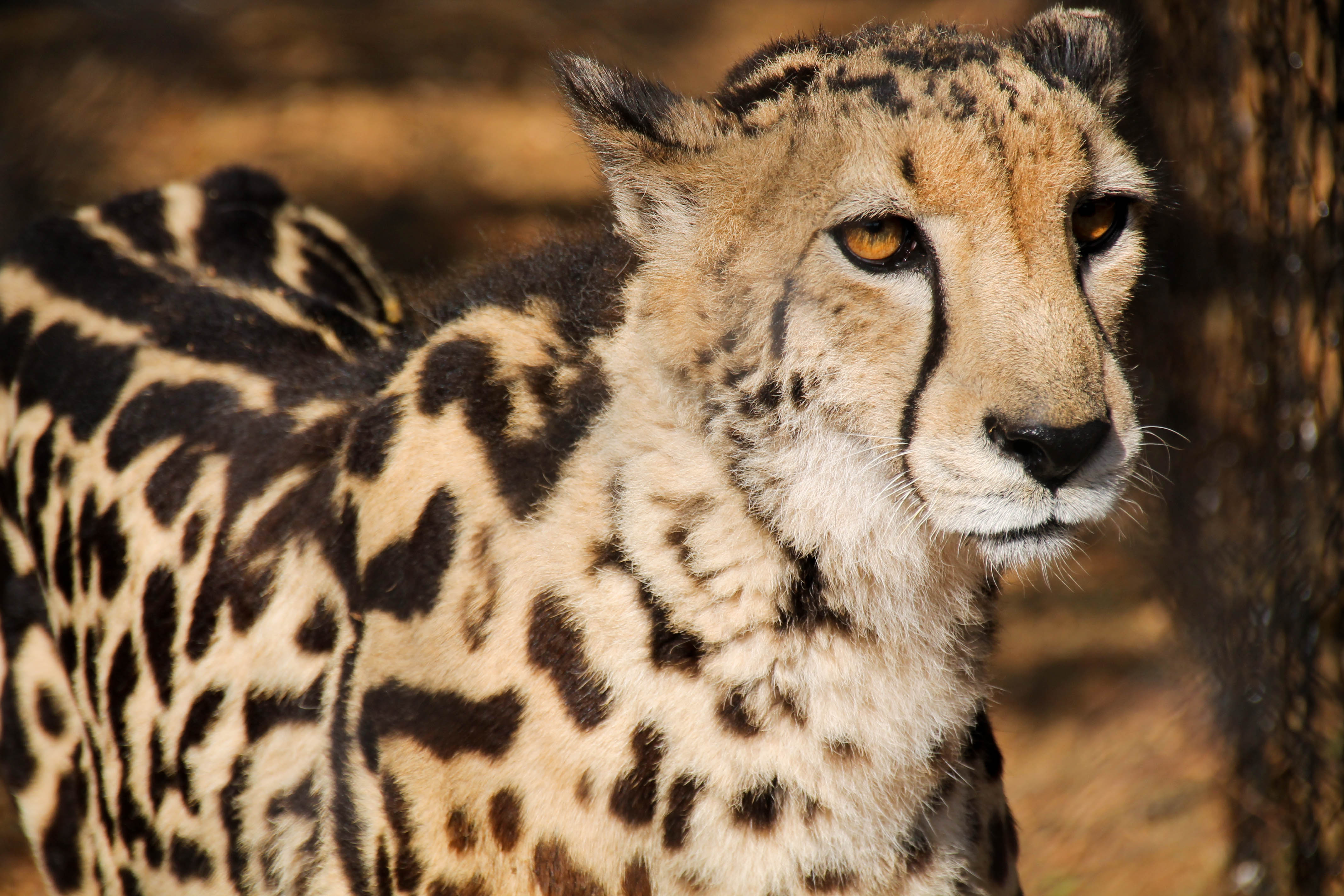 King cheetah – you can notice the black stripes along the back

We also learned that the cheetah’s greatest threat in the wild is habitat destruction. In South Africa in particular, the cheetah may resort to hunting livestock on rural farms, which can result in their deaths when farmers attempt to protect their farm animals. Efforts to reduce cheetah/livestock interactions and prevent cheetah deaths have been implemented through the use of guard dogs to protect livestock by keeping cheetahs away from farm properties.

Overall, I was really impressed with the Ann van Dyk Cheetah Centre and enjoyed my tour there. Coming from Canada, I had such a small awareness of the social and environmental issues that the cheetahs face, as well as the other endangered animals that the centre seeks to conserve. It was a really special experience to meet a cheetah up close, and to learn more about the gentle side of the animal that is often assumed to be just an aggressive predator. 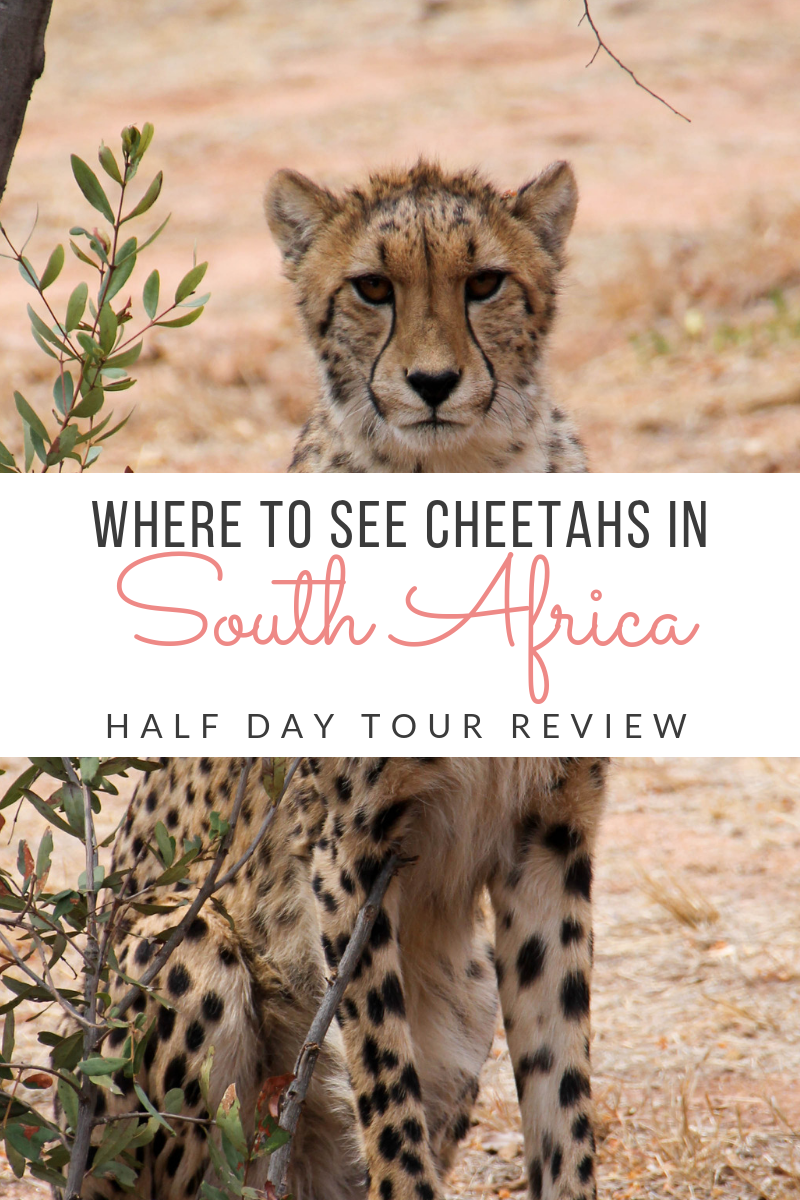 Alice Chen said:
This looks like an amazing place! I definitely want to check it out!I'm so happy they are doing conservation too
Tasha said:
I loved reading this. Cheetahs are my favourite animal and I was also lucky enough to visit some in a rehabilitation and awareness centre in South Africa too. I'm glad the ones you saw seemed well cared for too.