How to Scuba Dive in Belize’s Blue Hole

The Blue Hole in Belize is as infamous as scuba diving sites get and was recently named one of the 8 wonders of the world. It is said to be a dizzying 408 ft deep and 1000 ft wide. It’s no wonder that many divers and travellers alike cross the world to see the hole from both above and below. 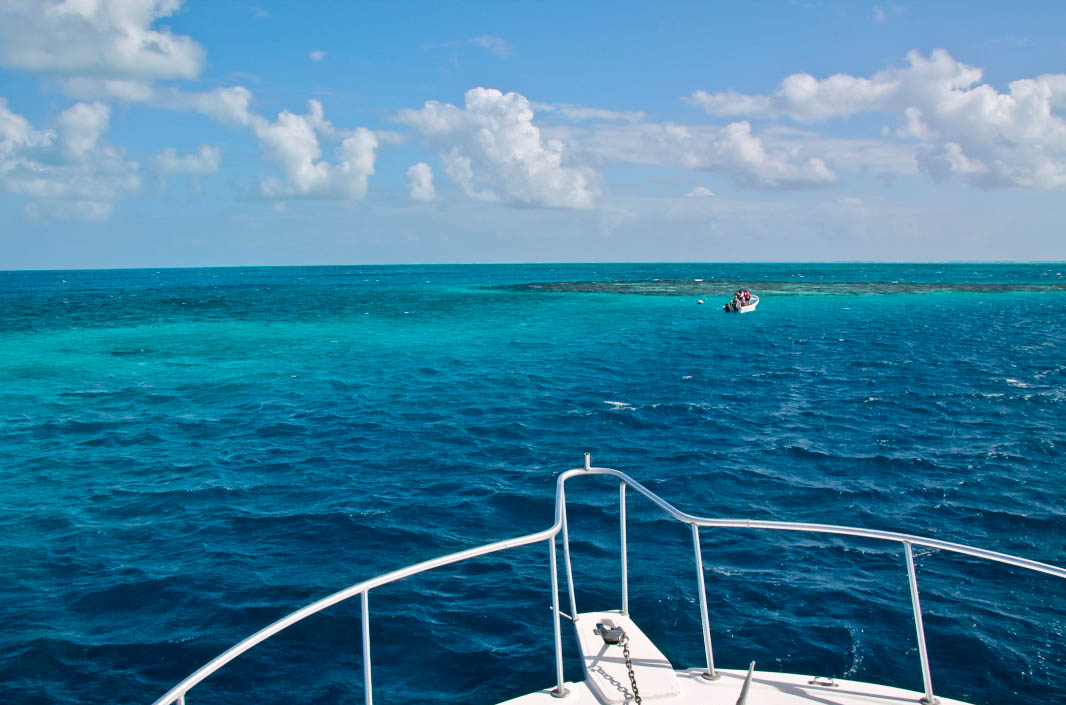 After getting PADI certified in Zanzibar last year, I wanted to ‘get my feet wet’ so to speak, with more diving in one of my dream destinations: Belize. I had always wanted to dive in Belize because it is conveniently situated on the world’s second largest barrier reef so you can imagine the amazing aquatic life one can see while diving.

The blue hole however is on the other end of the diving spectrum: essentially it’s a collapsed cave that turned into a giant sinkhole. Since it’s not a reef dive, don’t expect to see much marine life. The main drive for divers is its crazy depth at 130 ft, the staggering underwater stalagmites and the possibility of seeing reef sharks (and supposedly a lone hammer head that roams the waters) – and of course, the special feat of accomplishment: you are able to tell your friends you dove the blue hole! 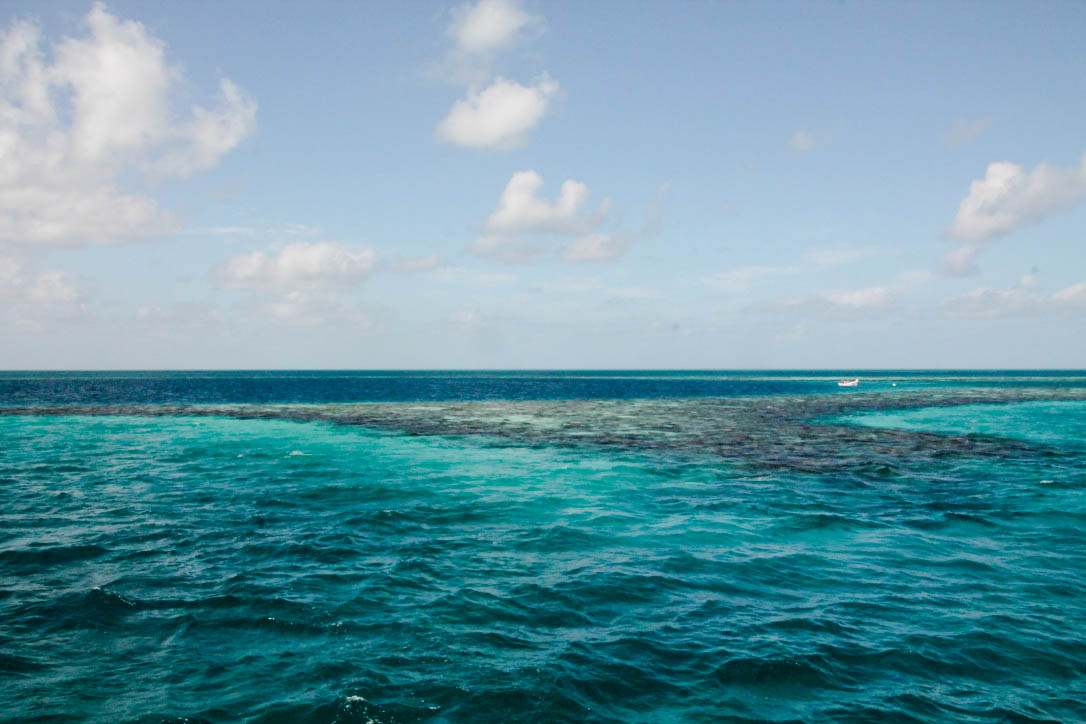 The blue hole is approximately 2.5 hours from San Pedro by boat (one way) and 2 hours from Caye Caulker by boat (also one way). Since it is quite far, dive shops tend to do the trips in large numbers with a minimum of 10 divers per trip. Thankfully I had a full week when we stayed in San Pedro, because our trip was cancelled multiple times due to high winds. Luckily we were finally able to go out on our very last day in Belize. 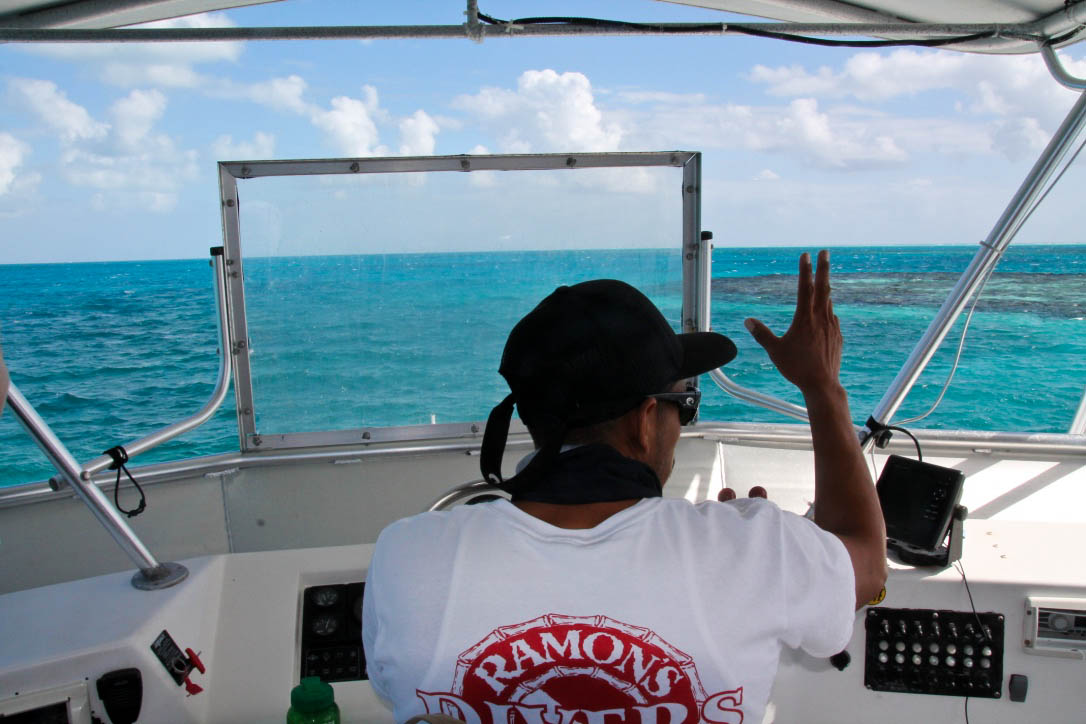 Related | Dive Equipment 101: All you need to know about scuba equipment 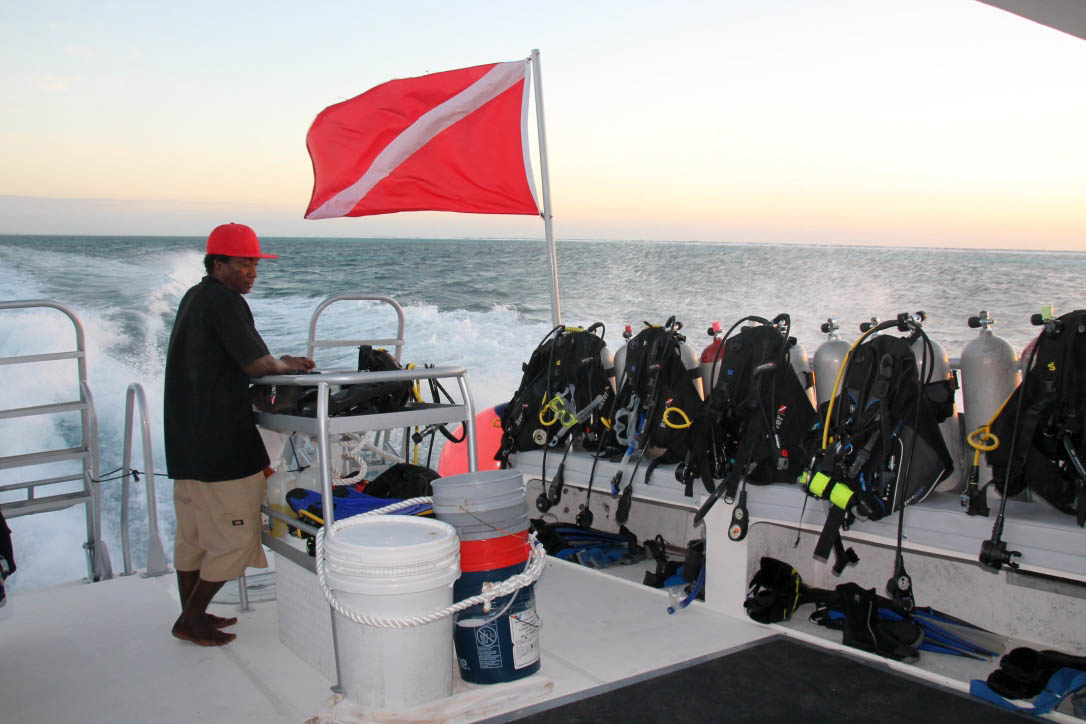 You leave at 5:30 am so you can expect to watch the sunrise from the boat!

Arriving at the blue hole, you will be able to clearly see the color difference between the ‘hole’ itself and the outside water. Once you descend about 20-25 ft you reach a sandy ledge that literally drops off into nothing. It’s like falling into darkness. The guides recommend you to look at the rock wall while descending, otherwise it can be really disorienting and off-putting to stare out into the deep, dark hole.

Once you reach 100 ish ft. you will start to see the huge stalagmites that have been formed over centuries and are still growing! 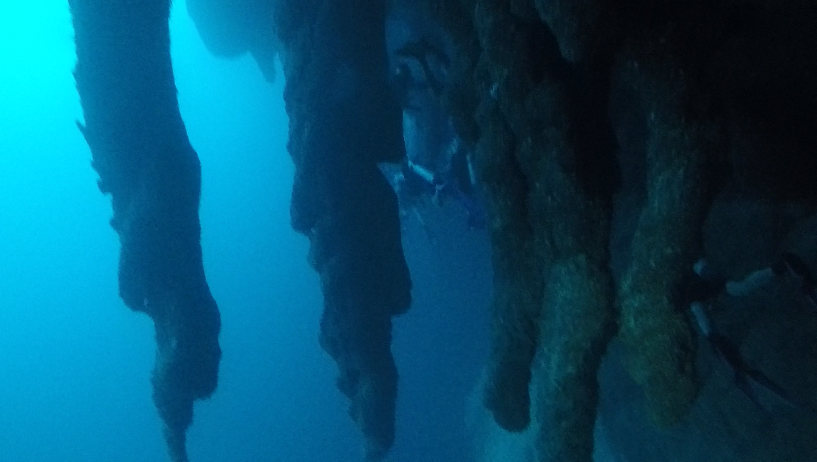 At 130ft. you can swim through the stalagmites or simply gaze at them in awe. Keep your eyes peeled for passing reef sharks in the hole! We saw a 7 footer off in the distance. 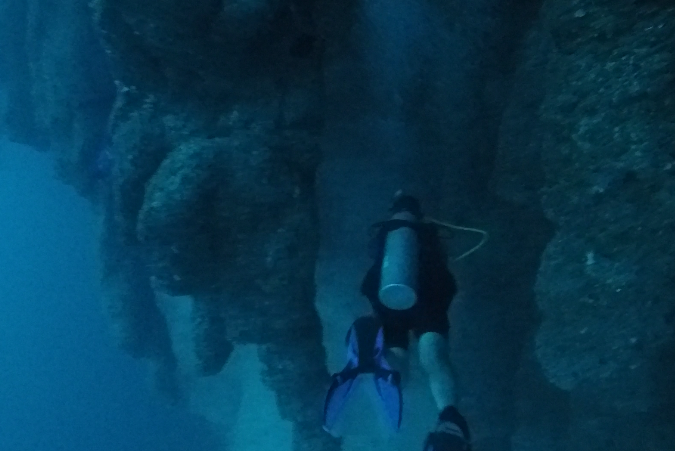 For me personally, diving 90-100ft I was completely coherent and felt fine. Once I hit 130 feet, I felt a bit odd. Suddenly I realized I could feel the immense pressure on my body and began to panic slightly because I didn’t want to go any deeper. In checking my pressure and O2 gauge to see what depth we were at, I realized I couldn’t differentiate between them. It took me a few moments to realize what was happening – I had nitrogen narcosis!!!! My reaction was even caught on camera (and no I won’t be posting that video).

If this happens to you, remain calm and keep breathing. Some people laugh, some people get scared and others don’t feel the effects at all – regardless recognize what is happening and remember that you will feel back to normal once you begin to ascend. Let your buddy know what is going on and stick with them. In my case, within a minute we had already begun our ascent and after only a few meters up I began to feel back to normal.

The slow ascent involves a loop route (you don’t go back the way you came) to the surface. You will eventually make it back up to the sandy ledge area and be rewarded with sunbeams streaming down through the water. There you will take your safety stop. Next is a short ascent up to the surface. 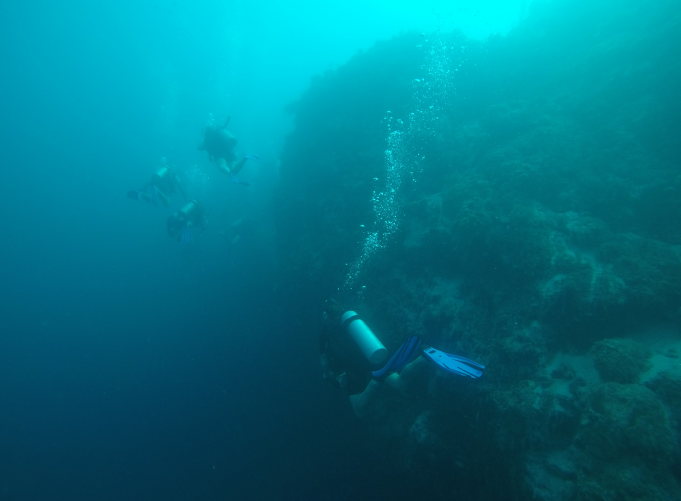 Passing the sandy cliff on our way to the surface!

It is important to be aware of the risks and responsibilities of deep diving before attempting this type of dive. Though PADI recommends a max. depth of 18 metres or 60ft for open water certified divers and 30 metres or 100ft for advanced, many (if not all) of the dive operations down in Belize will still take you to the blue hole’s max depth of 130 ft. regardless of your level of training. This is quite a jump for some people and can also be downright dangerous if you do not know what to expect or how your body will react.

Everyone is different and you know your body best – so being prepared by knowing the dive plan, having a dive buddy, knowing how to act if you experience equipment malfunction, nitrogen narcosis or discomfort under water, is incredibly important.

In my experience in the blue hole, we had a group of 13 but not everyone was paired up. Though I had a buddy off the hop, there were quite a few solo divers and there was no mention of people finding a buddy to dive with. This meant the dive master was more responsible to check in with everyone individually versus a buddy system of two people checking in with each other more frequently. This is pertinent in the response of an out-of-air or injured diver situation. If you need an alternate air source or have a cramp or injury, another diver (aka your buddy) may be in closer proximity to you vs. the dive master to respond. If you are a solo traveler on a dive trip, find someone to be your buddy or address it with the dive crew before entering the water.

Once under the water, our large group felt a little chaotic. The entire bottom time for the blue hole is only 8 minutes from the initial descent. So by the time you actually get down to 130ft, you don’t have a whole lot of time down there. Other than relying on your dive masters, it would be completely impossible to track the bottom time from the initial descent without a computer because it literally goes by so fast.

Towards the maximum depth, it became pretty disorienting; eventually everything becomes a blue/grey hue so it’s more difficult to tell the dive master apart from regular divers. Also, if you stared out into the hole instead of focusing on the rock wall on the side, there was a strange feeling of being ‘lost in the abyss’, so some divers without computers in our group required cueing to not drift off and stay at the appropriate depth. If the dive master was not quick to respond, these people could have gone too deep, or ascended too quickly and may have gotten really sick! Since we had a dive computer and knew the dive plan, we could appropriately compensate for these factors.

I would recommend that you don’t simply rely on your dive master, because the diver-to-master ratio can be high in group dive settings such as in the blue hole. A good option is to rent or purchase a dive computer so you can access personalized depth and time ratios and safety stop calculations. We rented a dive computer for the blue hole, and it made such a big difference in my confidence in doing the dive.

I think this is a once-in-a-lifetime experience and even though I got nitrogen narcosis, I would still do it over again. Looking for other epic dives? Check out the 15 best scuba diving locations in the world. 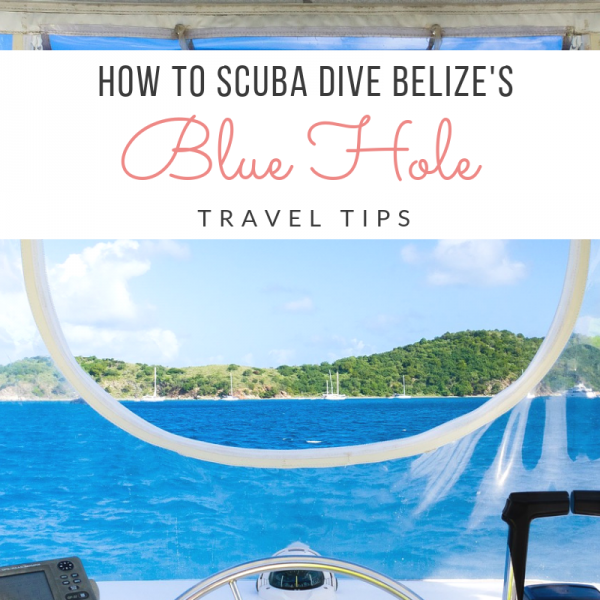 You May Also Enjoy:

Lynn Julie said:
Love this review! Sounds like a crazy adventure! Would love to try it - but feel like it would freak me out that you're diving into a big hole of "nothing"! Keep up the great work, Lynn Julie!
Marteen said:
This place looks amazing! I can see why so many divers are drawn here. All I need now is to get over my fear of open water :)
Aireona- Nightborn Travel said:
This is definitely something I have wanted to check out, and I had no idea what it would look like under the water. It is so interesting! Great pictures and great tips.
Livi Bee said:
Unfortunately, I can't swim :( I was, however, able to explore beneath the surface of the ocean when I rode an underwater scooter and a submarine. That's about as close as I'll get without those swimming lessons. Did I mention I'm scary? Lol. I have always wanted to visit Belize though!!
clare said:
That looks like a great place to dive, with some different things to see. I still haven't tried diving, but maybe one day I will. Belize is beautiful, so I wouldn't say no to a trip back there.
Joanna said:
What an amazing experience! I am actually going to Belize this year (I just booked the flights yesterday, yay!) and I want to visit the Blue Hole. I don't have a padi certificate so I won't be diving but I would really love to see it even if from above. Do you know how much it costs?
Liz said:
This is a really thorough guide!
Candiss said:
Wow this looks amazing! If suba diving didn't freak me out I'd have to do this!
Maggie said:
What an awesome experience! I've been to Belize several times but have never done this. It's definitely on my list!
Lorena said:
You are so brave, diving more than 130 ft. It looks scary and beautiful at the same time though. I wish I could do it someday, although I might have to let go of my fear of the deep.
Tatum Skipper said:
ahhh scuba diving. I've only done it once in Dubai but the experience was awesome. Love the tips you have on safety and such. It can get pretty chaotic down there so I'm glad you addressed that. I haven't been to Belize yet so will definitely be adding this to my list! That water is to die for.