The Ultimate Guide to Lalibela, Ethiopia

Lalibela’s rock-hewn churches are to Ethiopia, as the pyramids are to Egypt.

You simply cannot visit Ethiopia without making a trip to Lalibela, the gateway to the nation’s prized, world-renowned, rock-hewn churches. I spent an entire day touring through the churches with Ghion tours and am so excited to share with you my experience! The churches are so mind bogglingly large and intricately crafted that its somewhat of a modern-day mystery as to how they were made nearly 10 centuries ago.

(If you would rather skip to the nitty-gritty details, scroll down for key information on tours, accommodation and food in Lalibela)

Just like most ancient historical sites, there is an intriguing story behind the stone chiselled churches we see today. 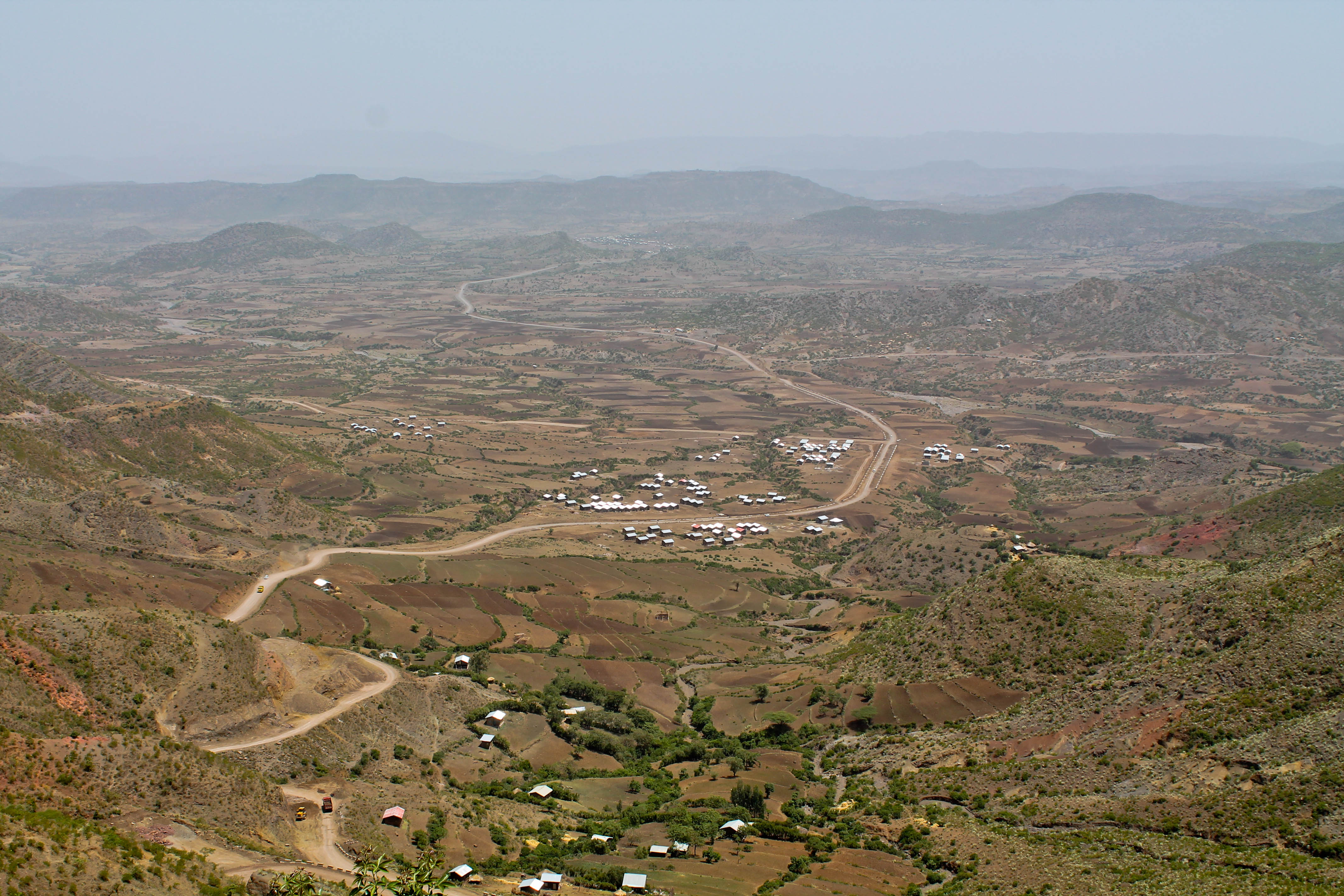 Rhoha, Paradise in the Mountains

Legend has it that in the 11th century a baby boy was born in Rhoha (modern day Lalibela), Northern Ethiopia and was immediately surrounded by bees. It was such a strange occurance that the village people took it as a sign from god; they hailed the infant a miracle child who would grow up to one day be their king. He was named Lalibela (which translates to honey eaters).

At this time Lalibela’s older brother was the reigning king, and he did not take kindly to his infant brother’s prophecy of overtaking his thrown. When Lalibela became a young man, the king poisoned him and he fell into a deep sleep for 3 days, where he had a vision that an angel took him to heaven and showed him a city of rock-hewn churches. The other version is that he awoke from his slumber and went into exile in Israel and was inspired to create a ‘new’ Jerusalem of rock at Rhoha (present day Lalibela).

As soon as Lalibela was crowned king, he recruited the best craftsmen and artists to assist him in creating his vision. Archeologists today estimate it would have taken >40,000 people to carve the rock-hewn churches, so its not surprising that various legends exist regarding how they were created. Some say angels helped carve the churches at night when the artisans slept.

The churches are divided into 2 clusters, separated by the Jordan river.

The Southeast cluster consists of 5 churches: Bet Emanuel, Bet Mercurios, Bet Abba Libanos, Bet Lehem and Bet Gebriel-Rafael. These ones are mostly excavated from a vertical rock face by exploiting existing caves or cracks in the rock. 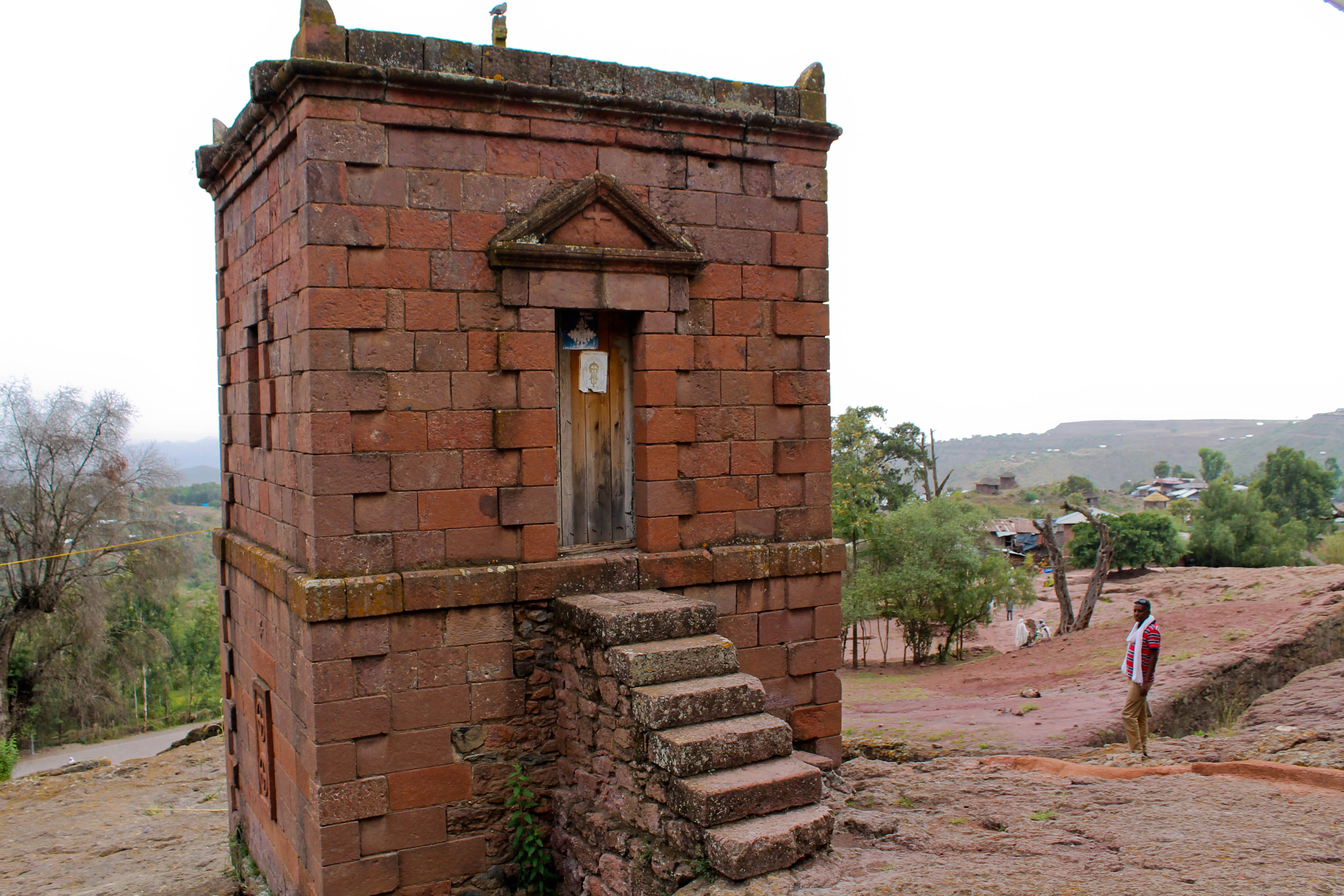 The Northwest cluster comprises 7 churches: Bet Medhane Aem, Bet Maryam, Bet Meskel, Bet Danaghel, Bet Debre Sina, Bet Golgotha and the Selassie Chapel. These ones are mostly excavated from below ground, and include several monolithic or ¾ monolithic structures which is an architectural style of excavation that is unique to Ethiopia. 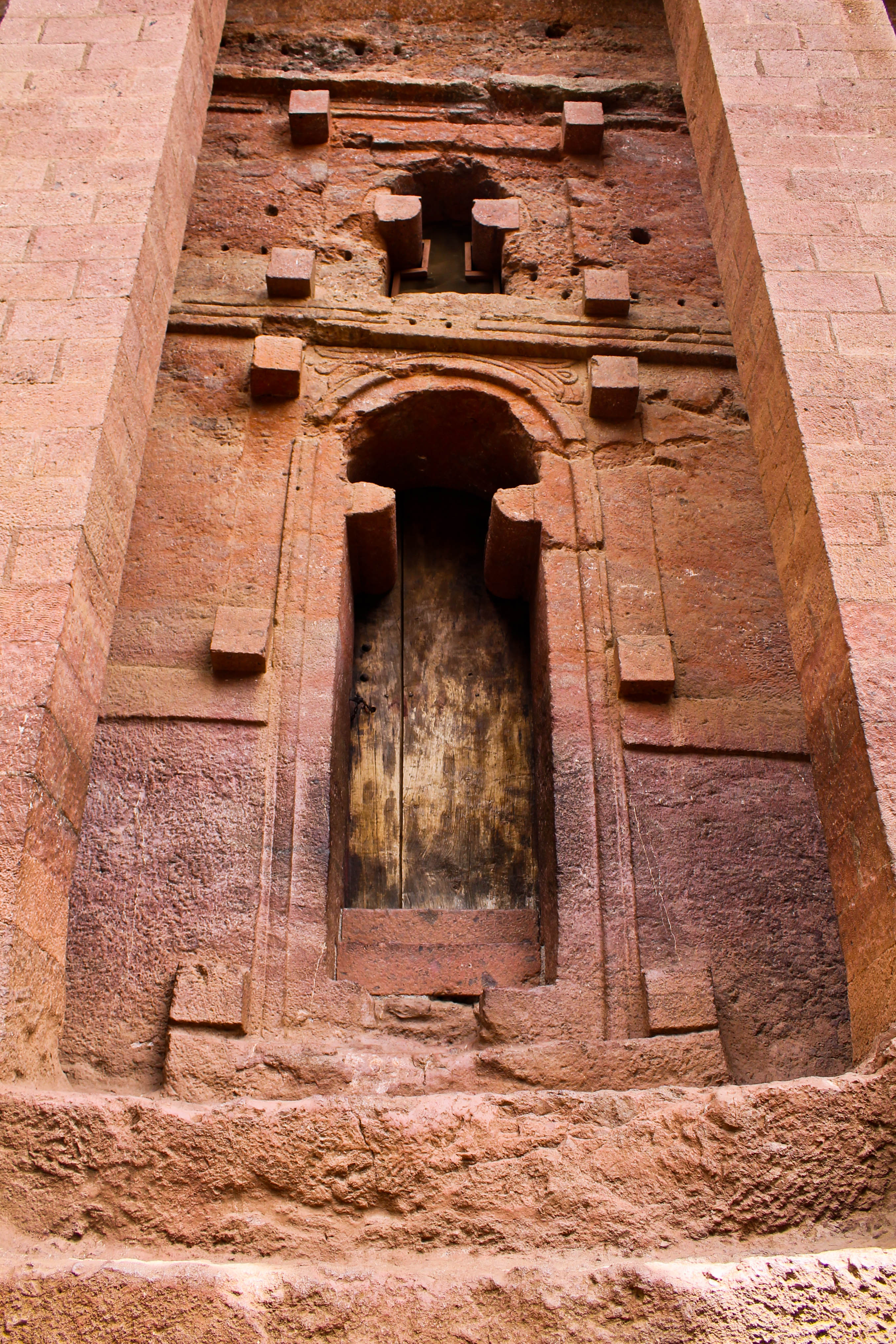 Bet Medhane Alem is the largest monolithic rock-hewn church in the world, measuring 11.5m high covering almost 800 squared metres; supported by 36 pillars on inside and 36 on outside. It has its own courtyard, which has pockets formed in its walls originally used as graves or monk caves. 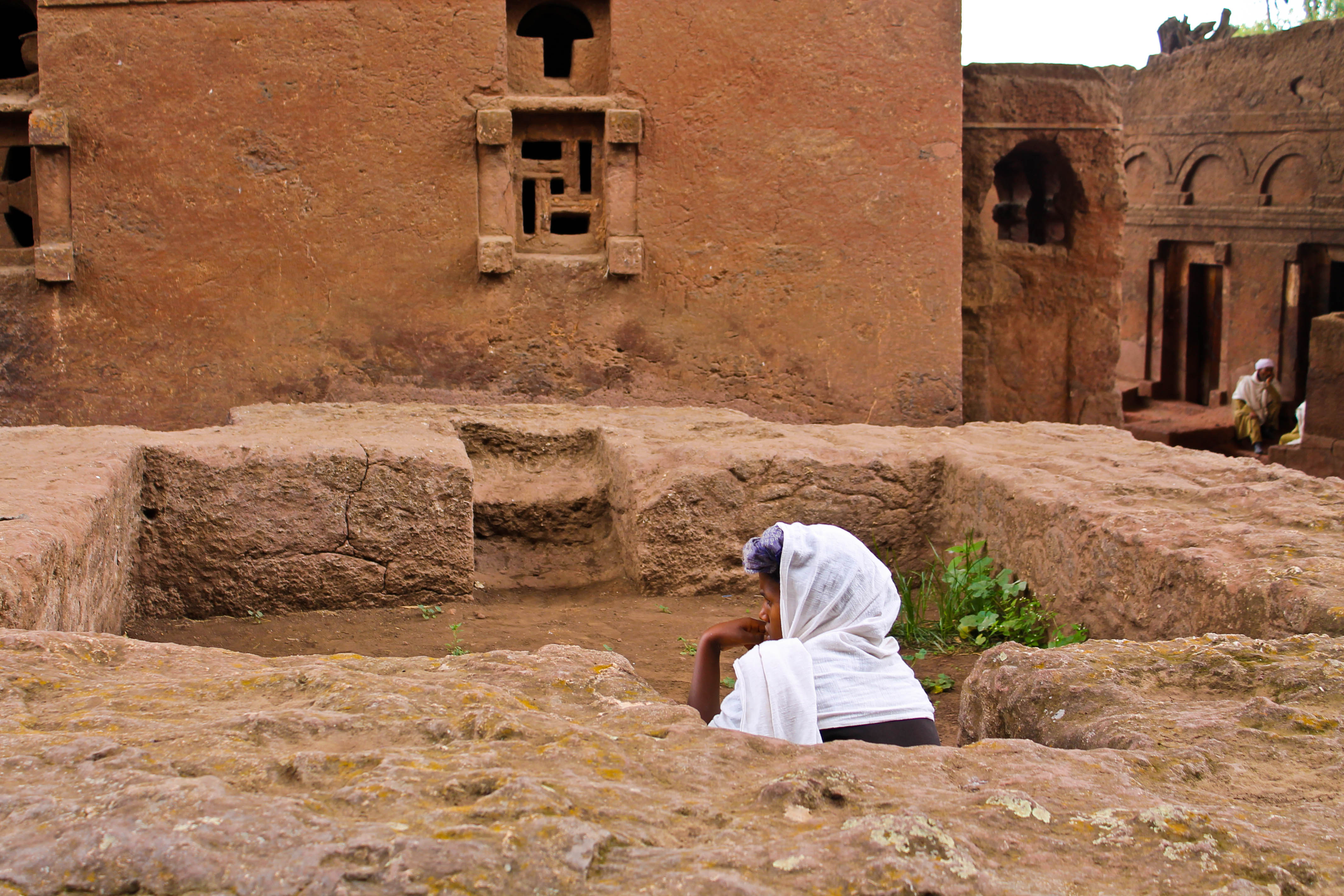 Bet Maryam is thought to have been the first church of Lalibela and is the most popular church among Ethiopians for prayer as it is associated with the virgin Mary. Inside, there are carvings of Lalibela’s cross and star of David; it also has one integral pillar shieled with cloth, which is thought among locals to protect secret inscriptions pertaining to how the churches were created.

Then there is Bet Meskel which is really tiny and almost a cave-like with only one room. 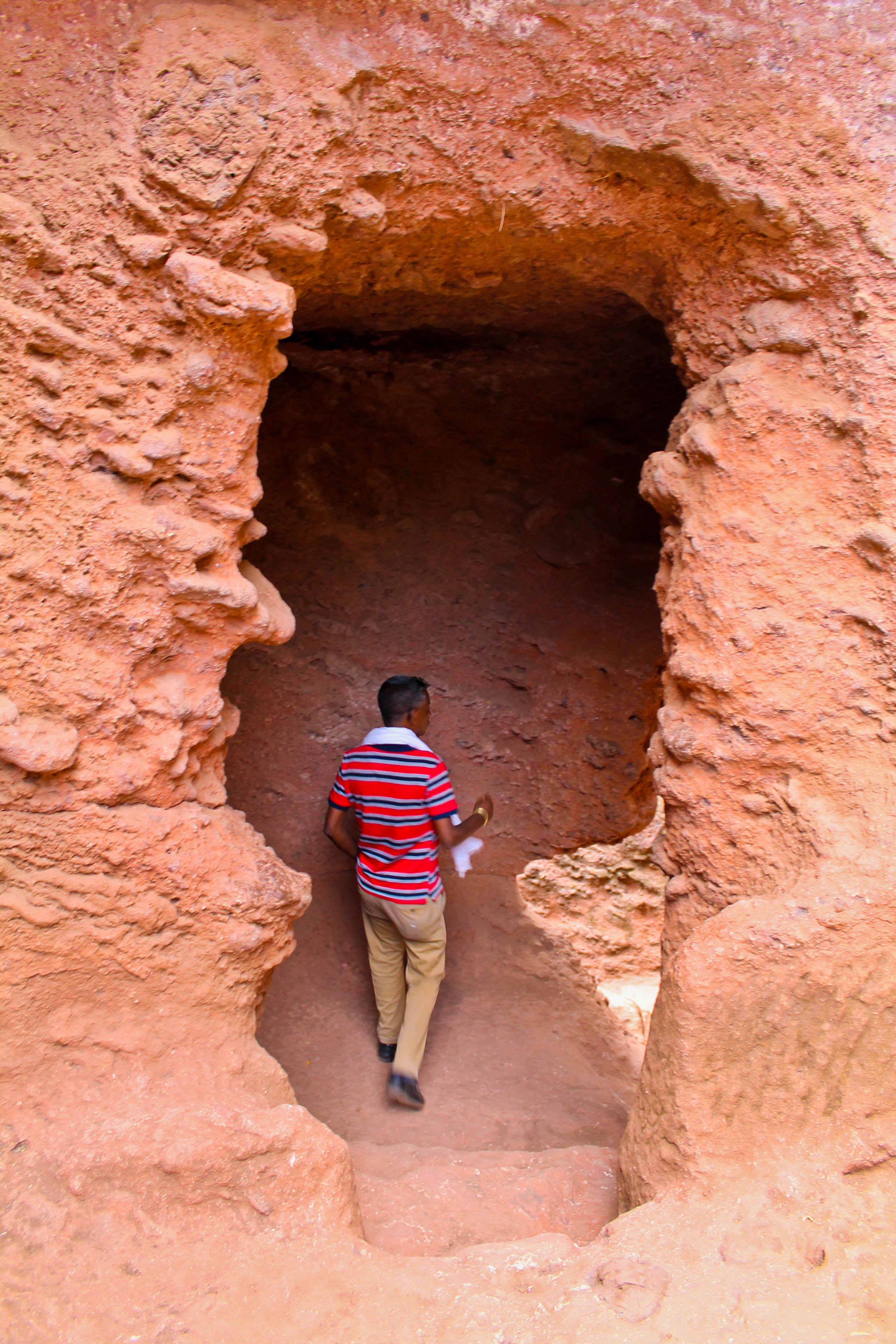 Bet Danaghel has a courtyard with a fertility pool believed to grant fertility to any woman who bathes in it. Obviously, the water is not clean in the photo I took, so I wouldn’t be first in line to jump in here, but apparently in high season women are allowed to be dipped in the waters. 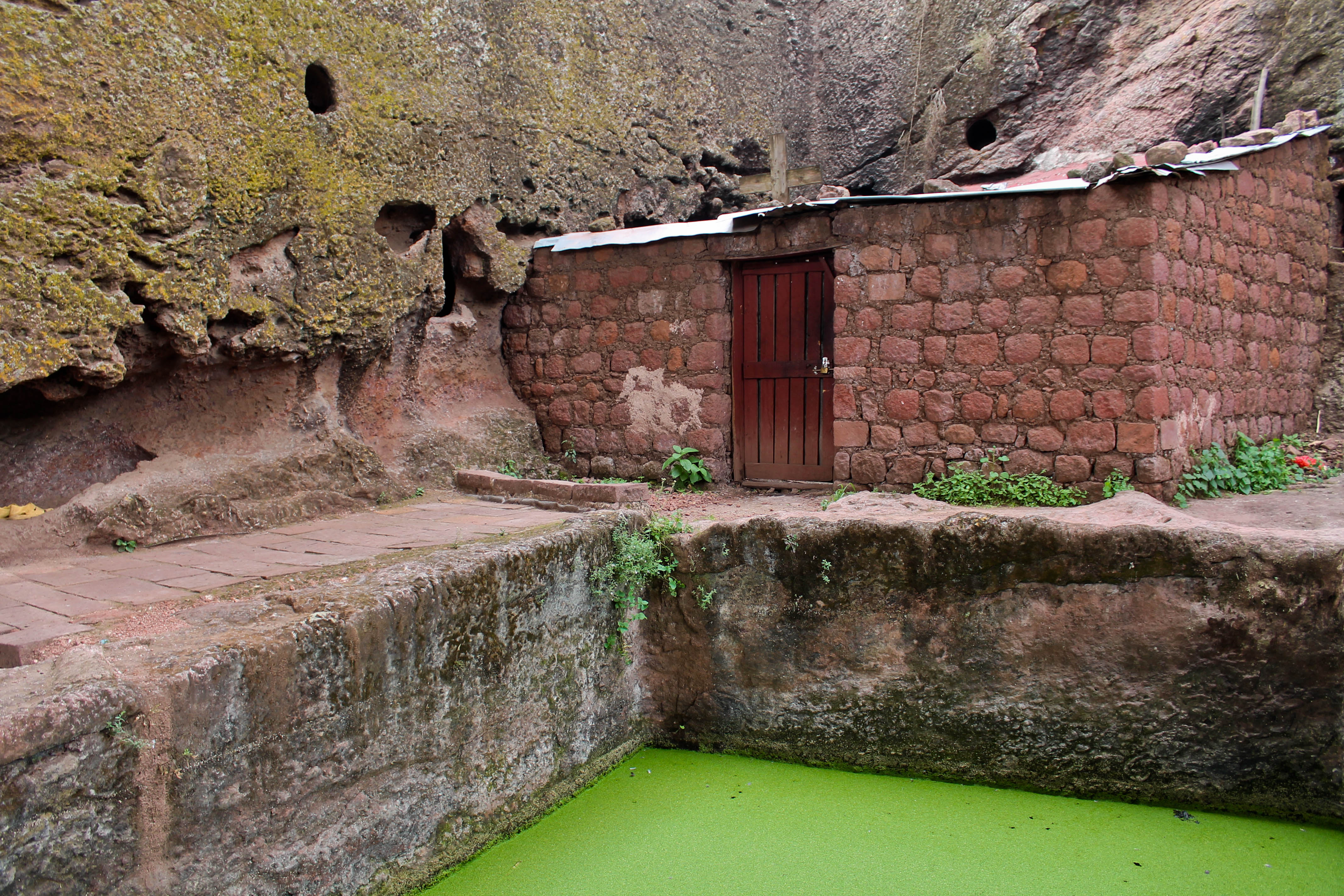 Heading to Ethiopia? | 8 Places to Visit in Axum 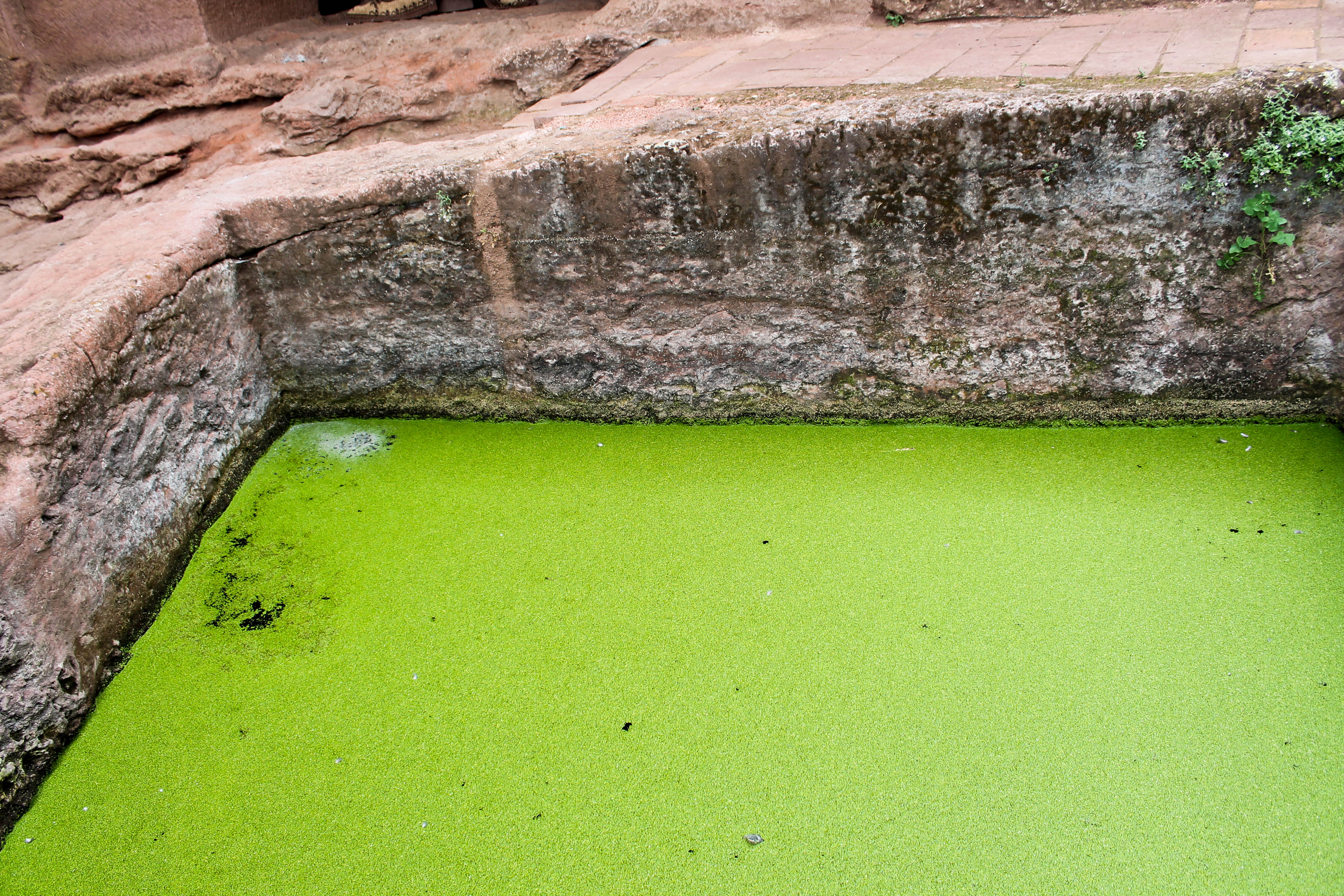 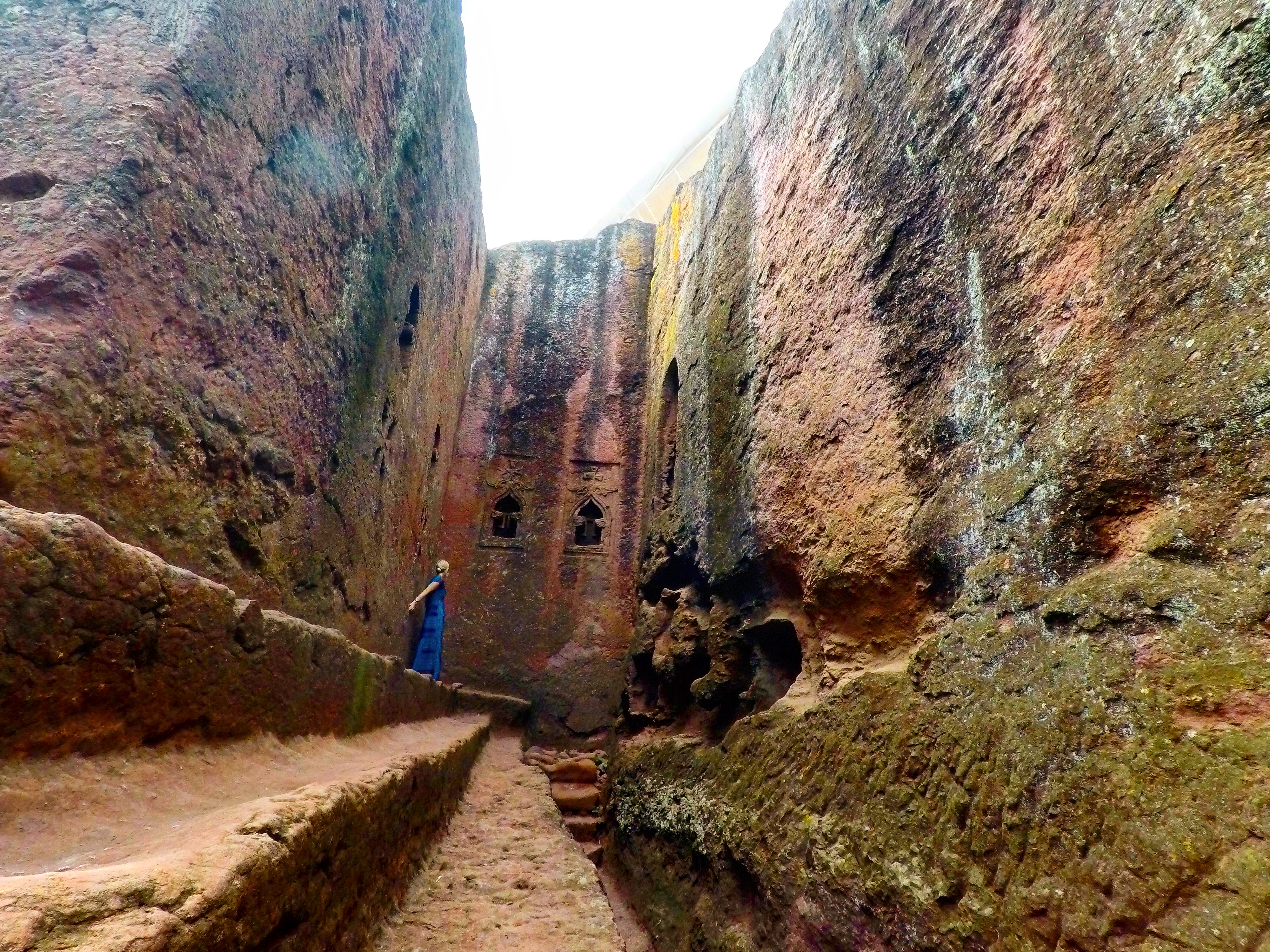 Bonus tip: It is a local custom that the interior of bet Golgotha is for men only, and is considered the holiest place in Lalibela as legend has it that the king is buried beneath it. Don’t do what I did and absent-mindedly enter (it was super embarrassing). 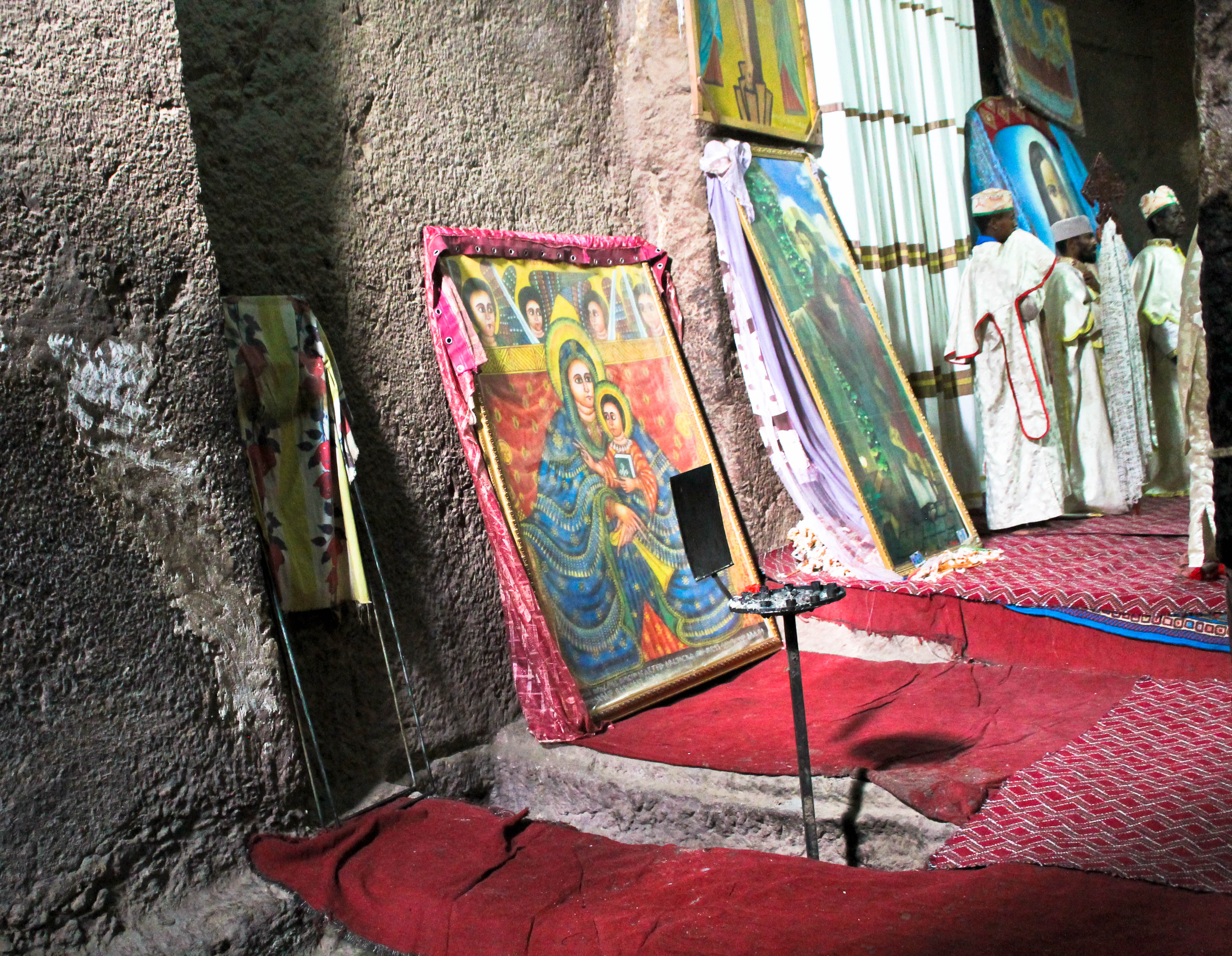 Then there’s the 13th church of St. George…the holy grail of rock-hewn churches, standing on its own plot. 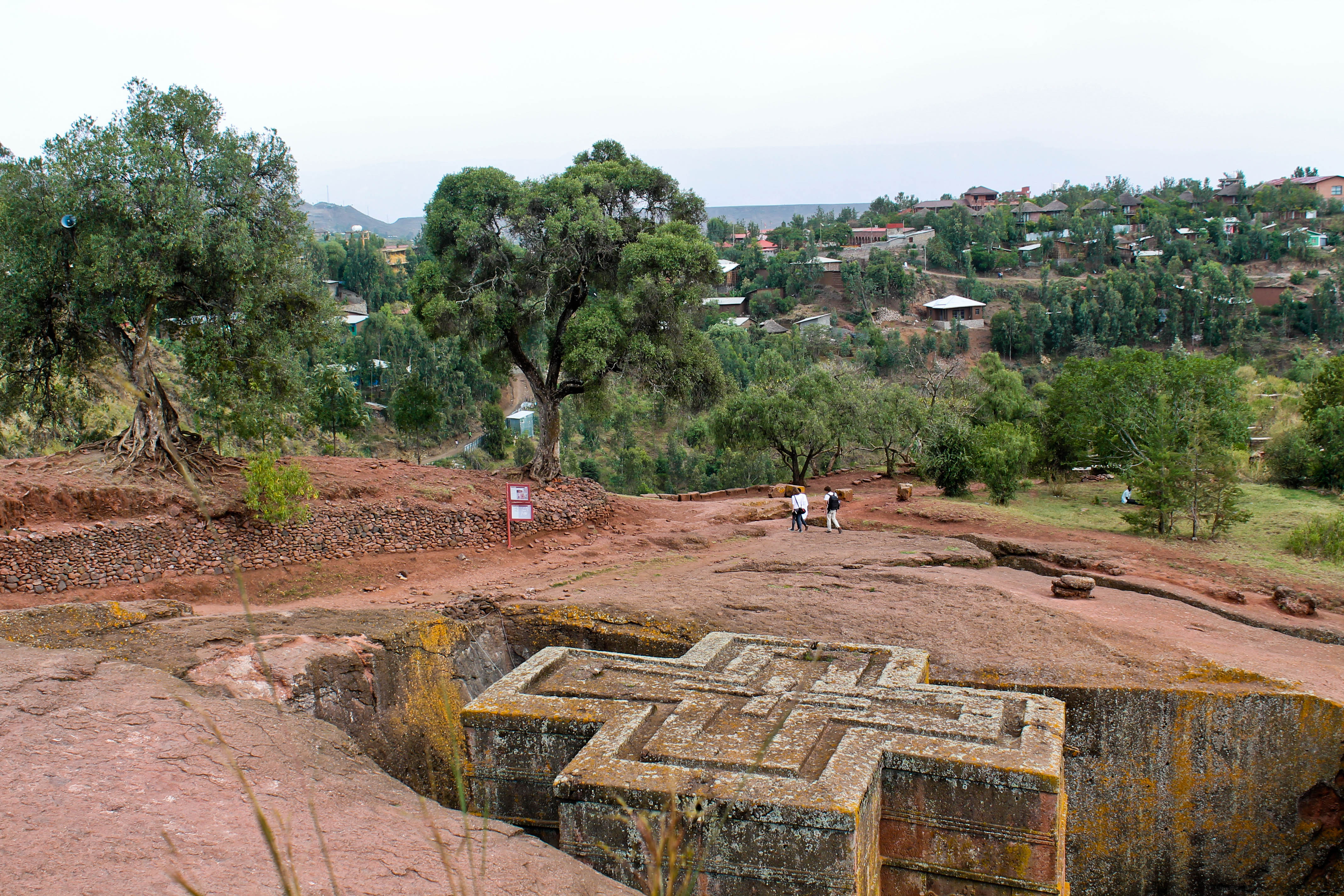 Bet Giyorgis (St. George) is an isolated monolith and the most photogenic in my opinion because it is carved in the shape of a symmetrical cruciform tower and is not covered by a modern protective sheath. 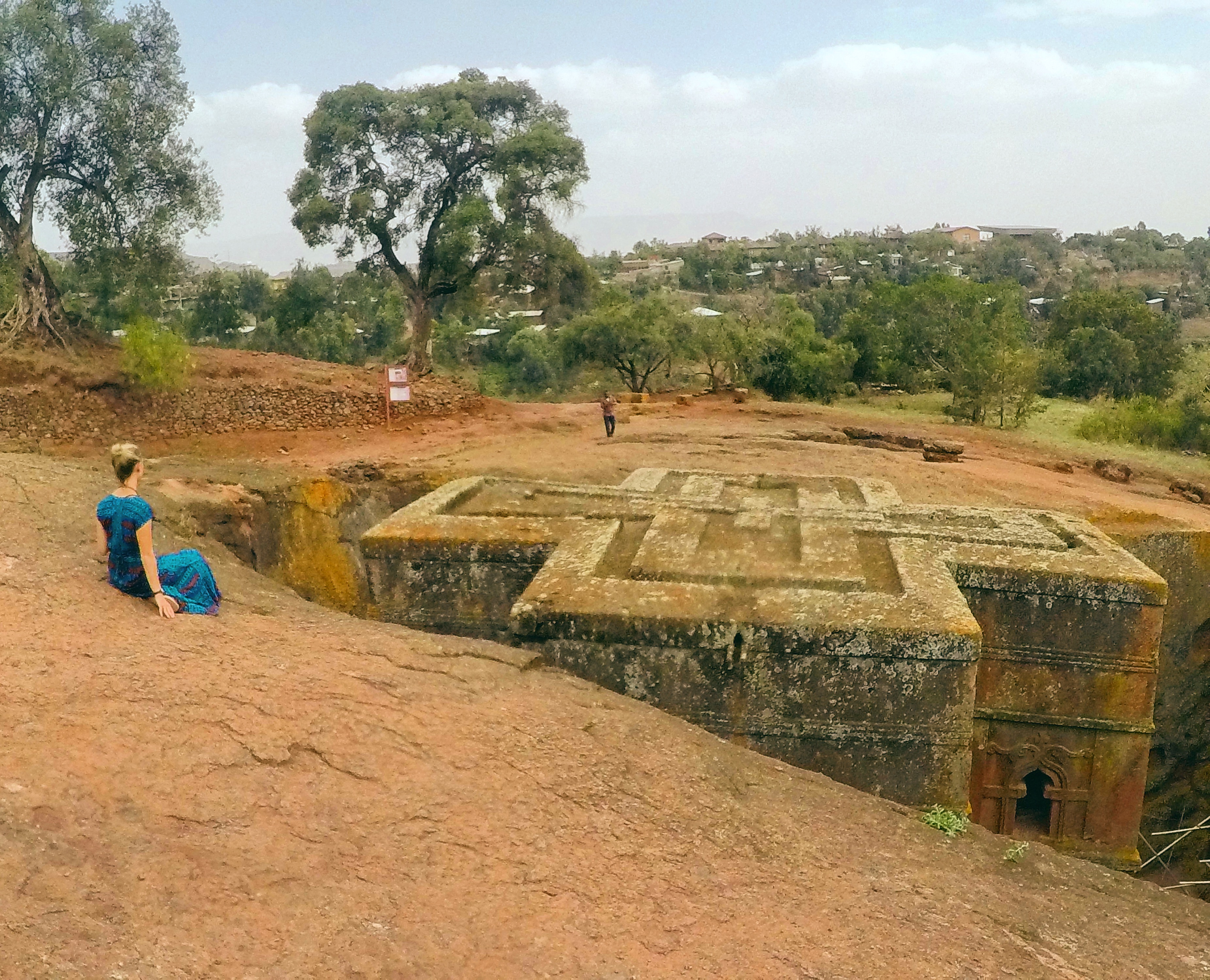 It’s approx. 15m in height and excavated from below ground level in sunken courtyard, providing some pretty amazing photograph opportunities from up above. 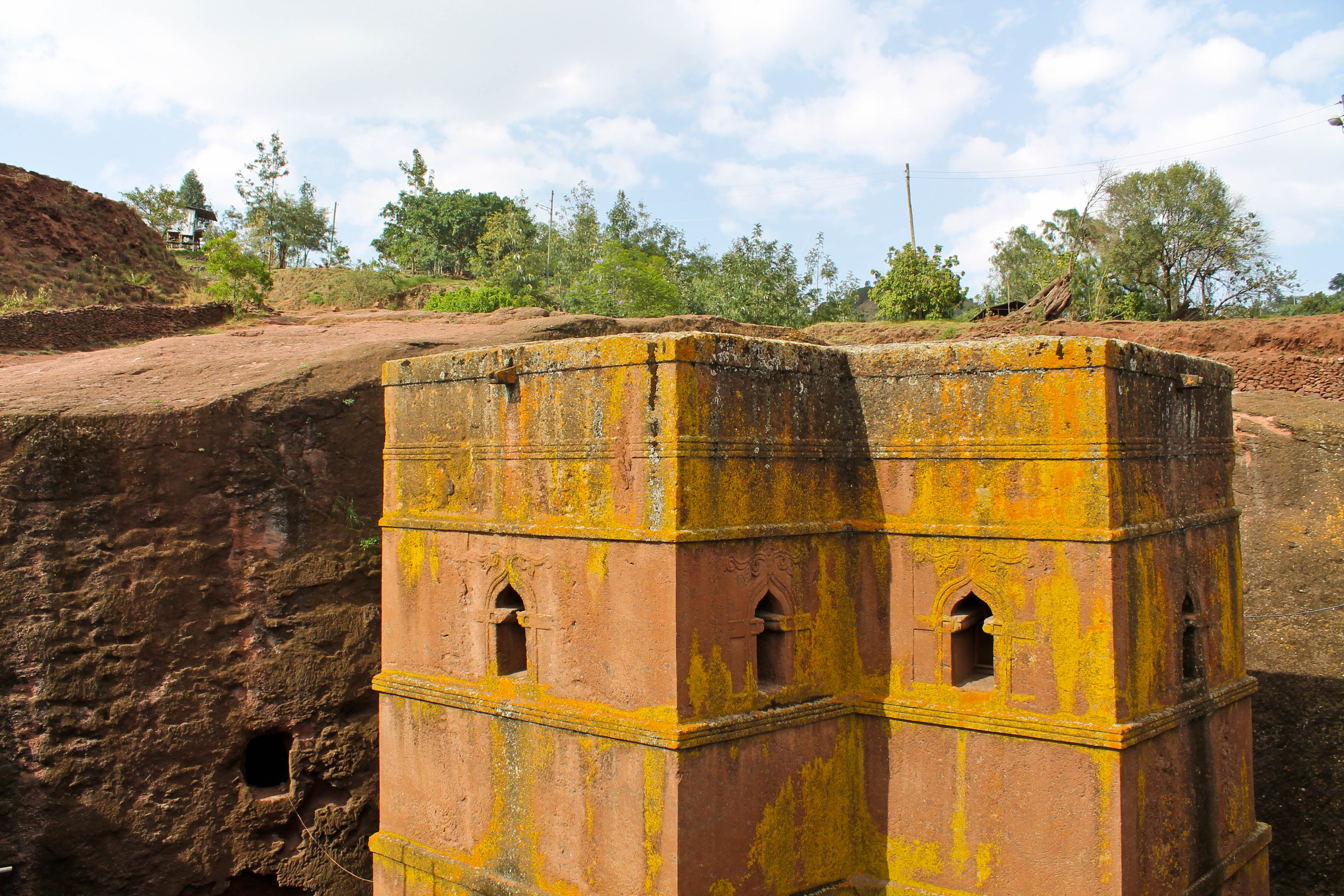 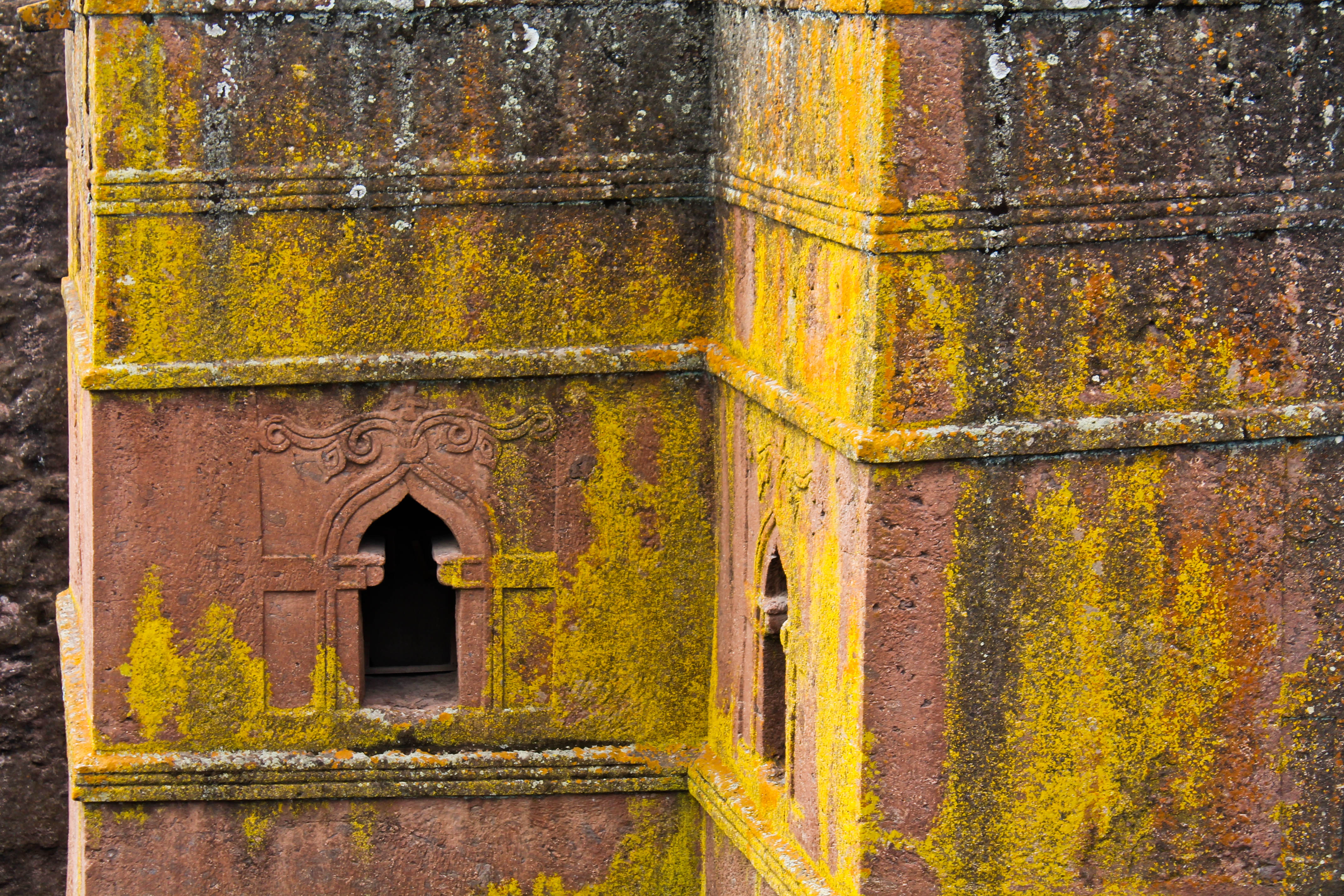 Bonus tip: Once you walk down inside the court yard of St. George, there is a hidden tomb off to one of the sides. 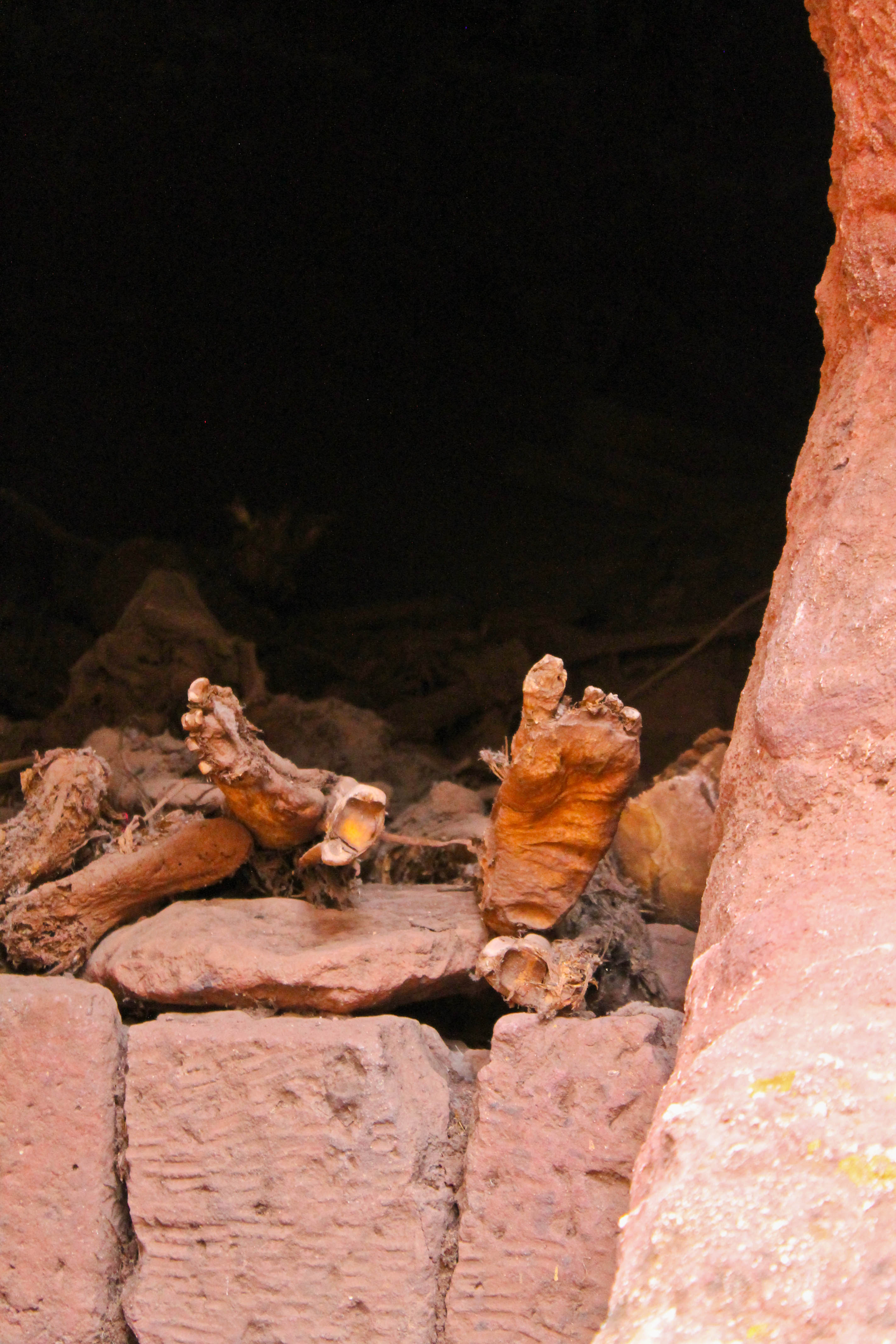 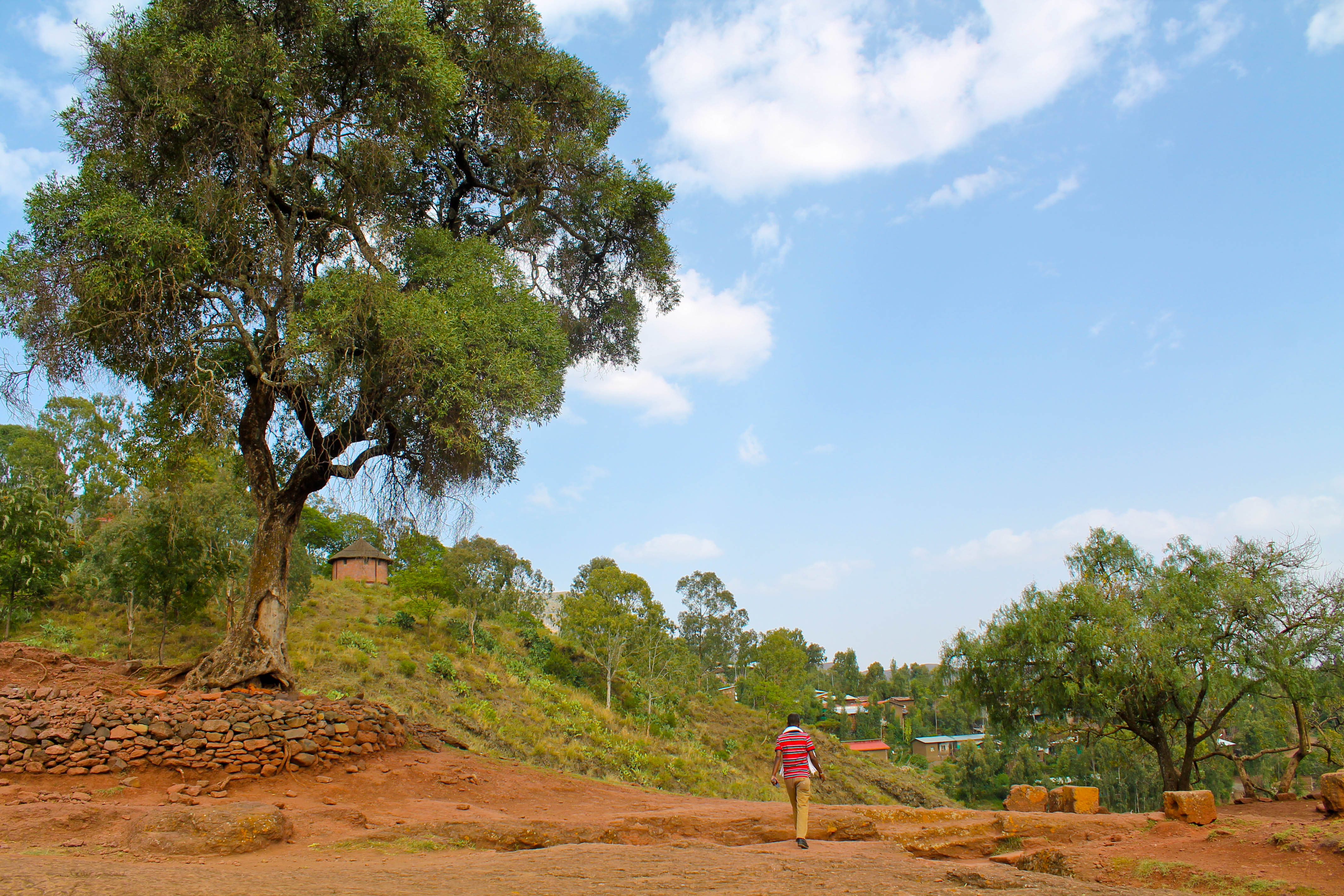 Tour: It is mandatory to get a guide to take you through the churches, but it is also really nice to hear all of the history behind the structures and the surrounding area. I planned my trip through Ghion tours, based in Addis Ababa who set me up with my guide, a highly intelligent and insightful local who has been providing tours for 9+ years. I would highly recommend them! You can get it touch with them via [email protected]. 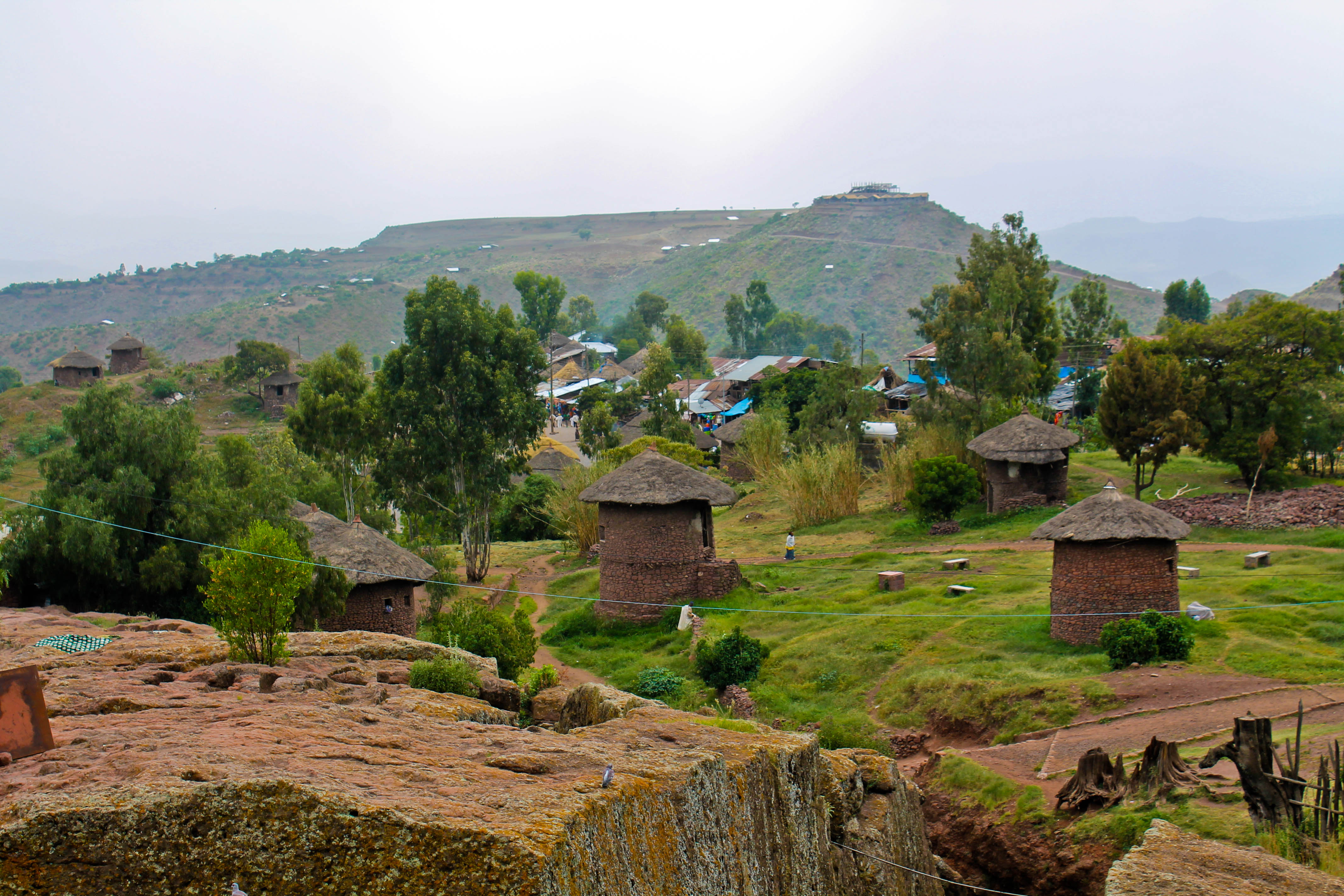 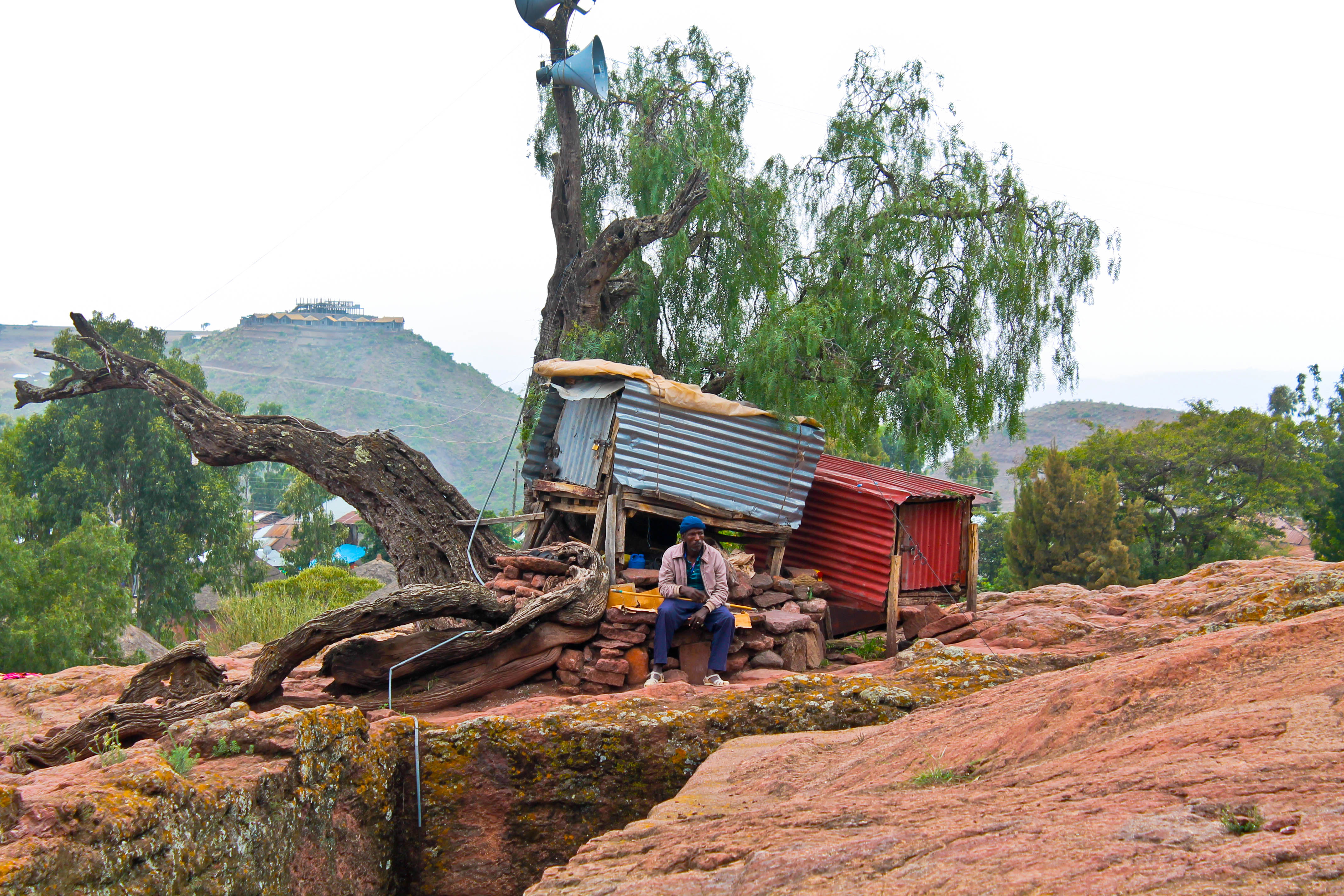 Bonus tip: When you enter the churches, you must take off your shoes. I would recommend bringing an extra pair of socks to bring and put on before entering the churches as you will either be walking on dusty stone floor or very old carpet. I was glad I had socks on, I wouldn’t have wanted to be in bare feet (but that’s just me). 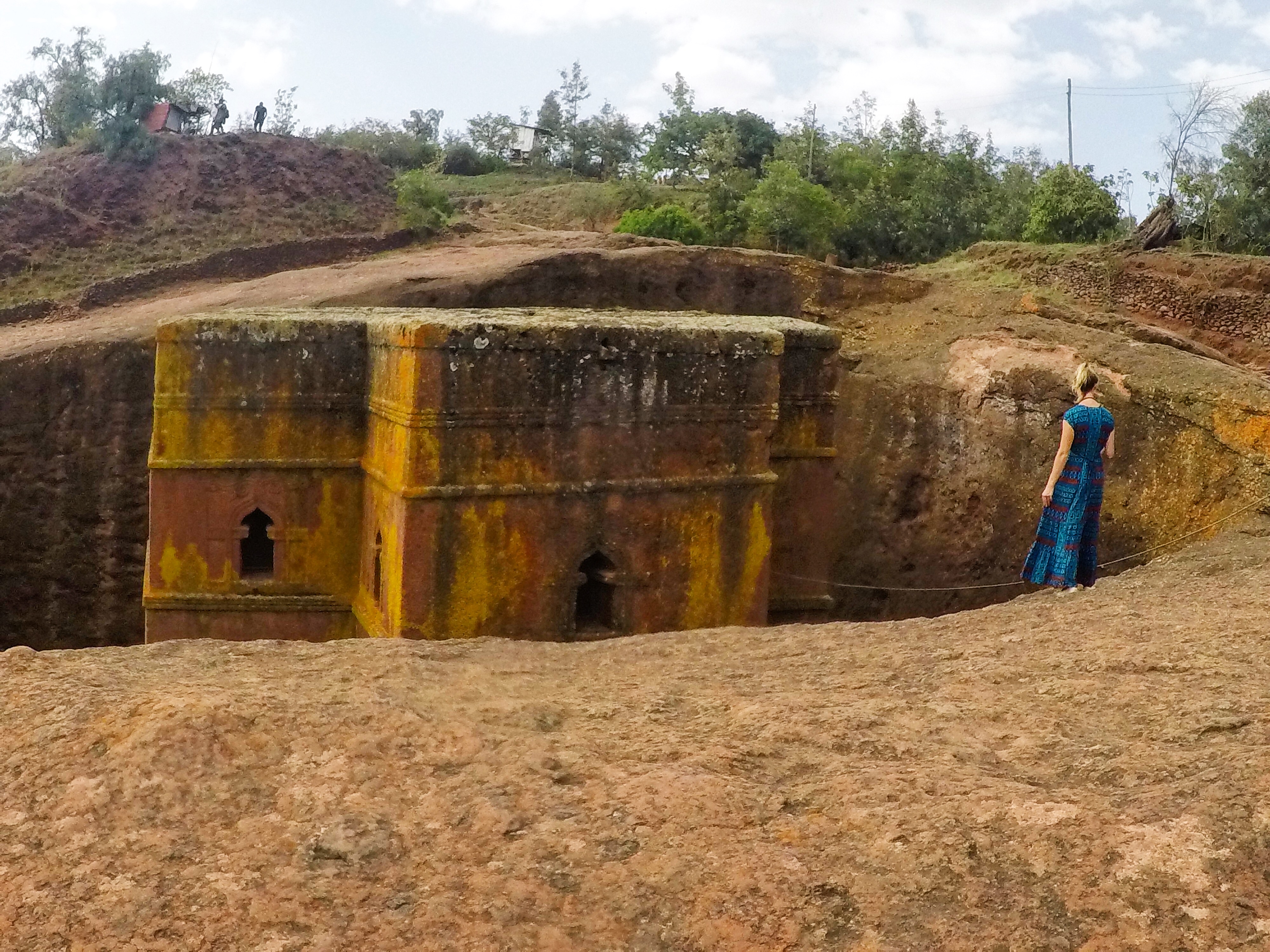 Cost: The entrance fee for tourists to see the churches costs 1150 BIRR, but this is good for more than one day so you can return if you wish. There is also a 300 BIRR fee for video camera (yes, go pros count as video cameras). Keep in mind it’s recommended to give a small donation for the churches (recommended 200-300 BIRR) and a tip for your guide (at your discretion).

Bonus tip: There is a sign that says for professional videography, the price is negotiable for video cameras. I didn’t have a business card on me so I didn’t bother trying to barter the price, but if you are there for blogging or vlogging purposes, maybe give it a go.

Bonus tip: If you have flown with Ethiopian airlines in the past year, take advantage of their discount. Simply present your past ticket number to obtain the deal.

I stayed at the Mountain View hotel, which as the name suggests is built on top of a mountain and offers extraordinary views of the valley below. 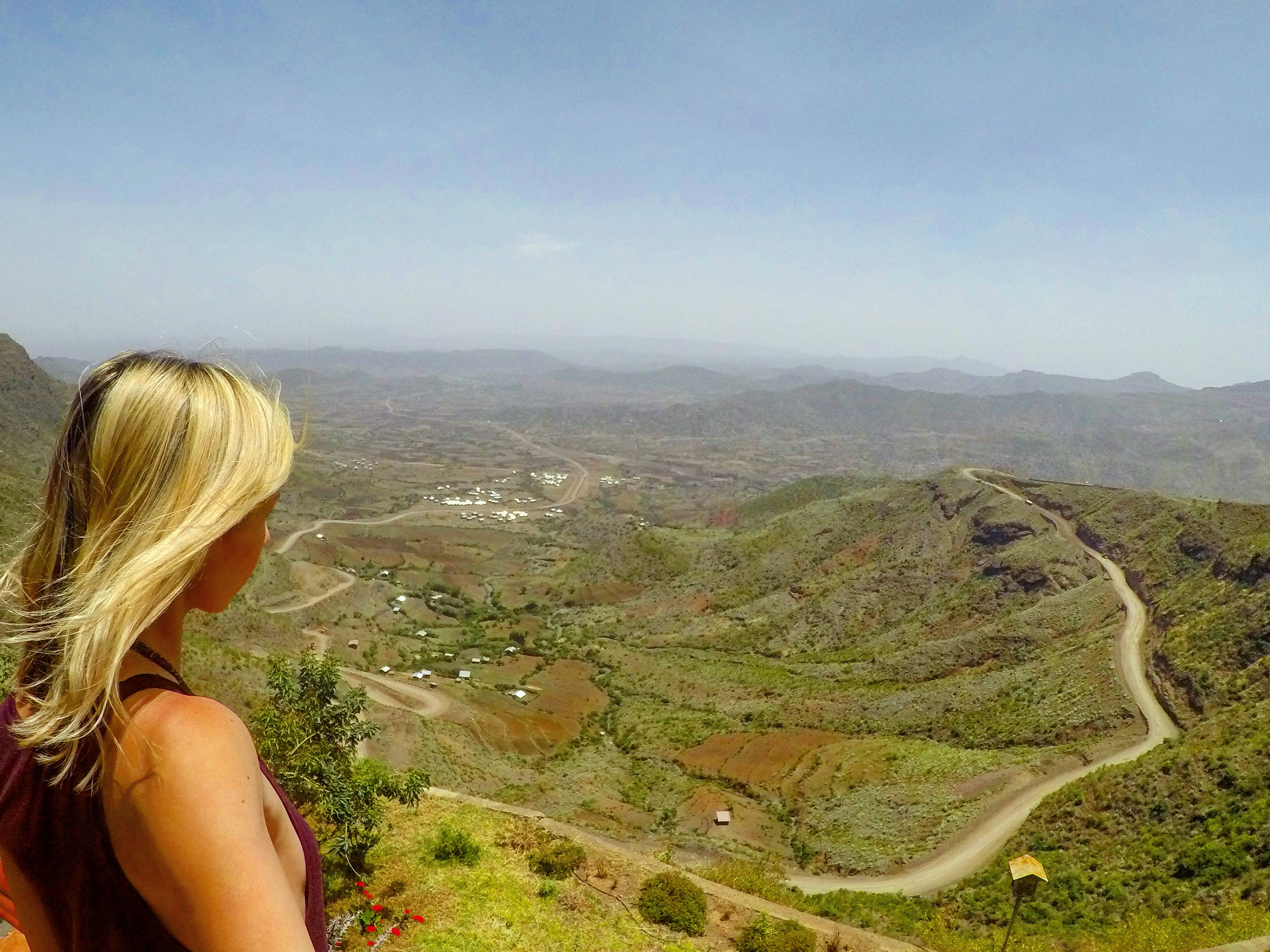 My room had a balcony facing the canyon, yielding the perfect sunset view and was a peaceful place to sip on my morning coffee before heading back to the airport. In fact, I think the coffee I had at the mountain view hotel was one of the best I had in Ethiopia. 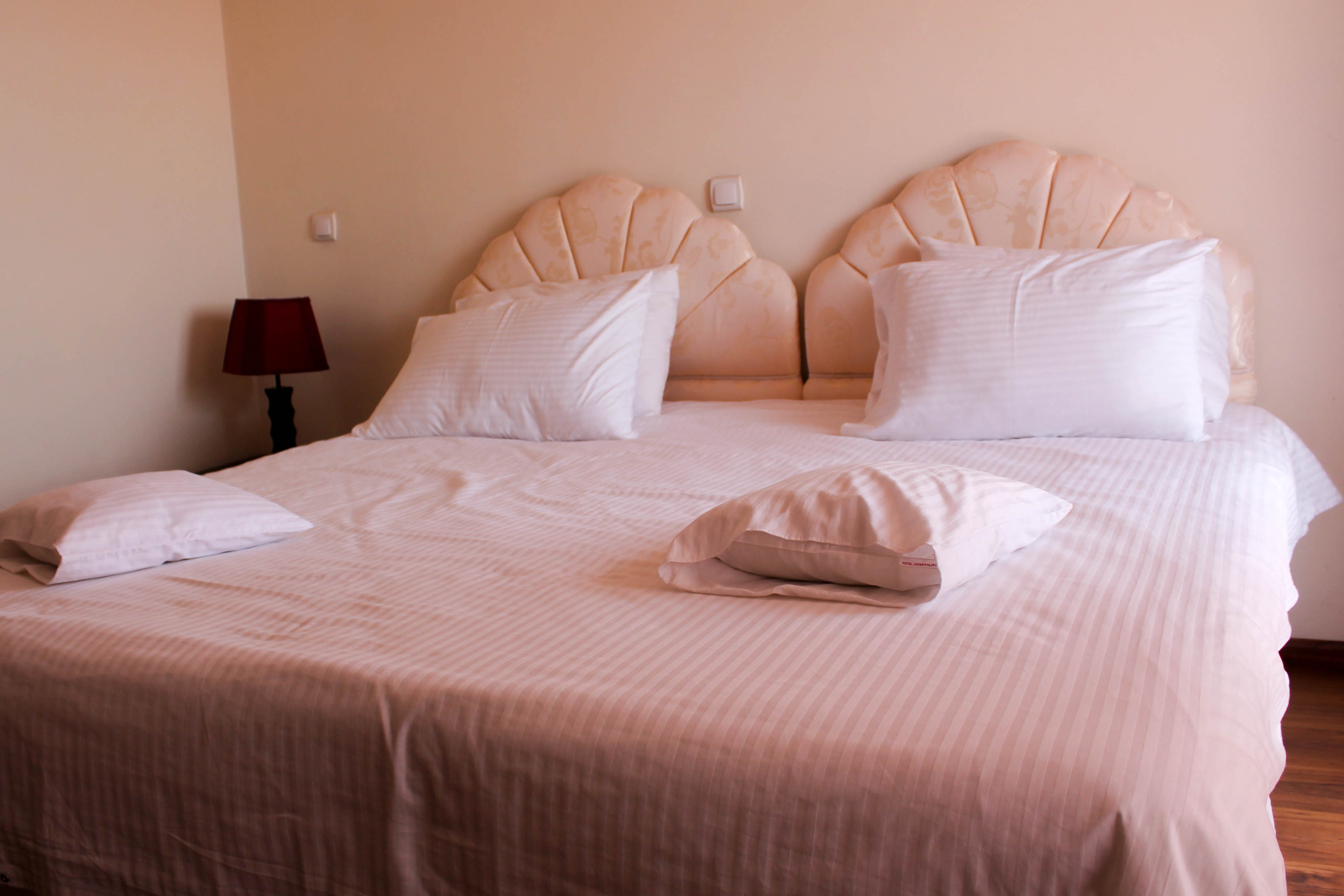 Bonus tip: Coffee comes included in your room price but you need to order it at the restaurant and have it sent to your room.

I ate dinner at the Olive Tree Hotel, which offers basic seating but splendid local food at cheap prices. I had the vegetarian “fasting food” platter and can highly recommend it, though it was way too much food for one person.

Bonus tip: An appetizer of bread and dip comes automatically so don’t order anything else unless you are over 2 people. The massive platter of Ethiopian food, a large bottle of water, and one bottle of beer cost just 130 BIRR (approx. $7.50 CAD; $5.50 US). 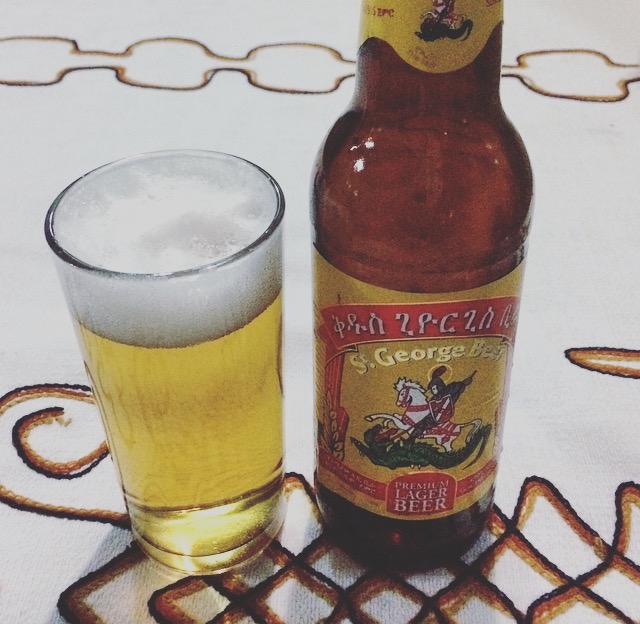 Have you been to Ethiopia? Is Lalibela on your bucket list? 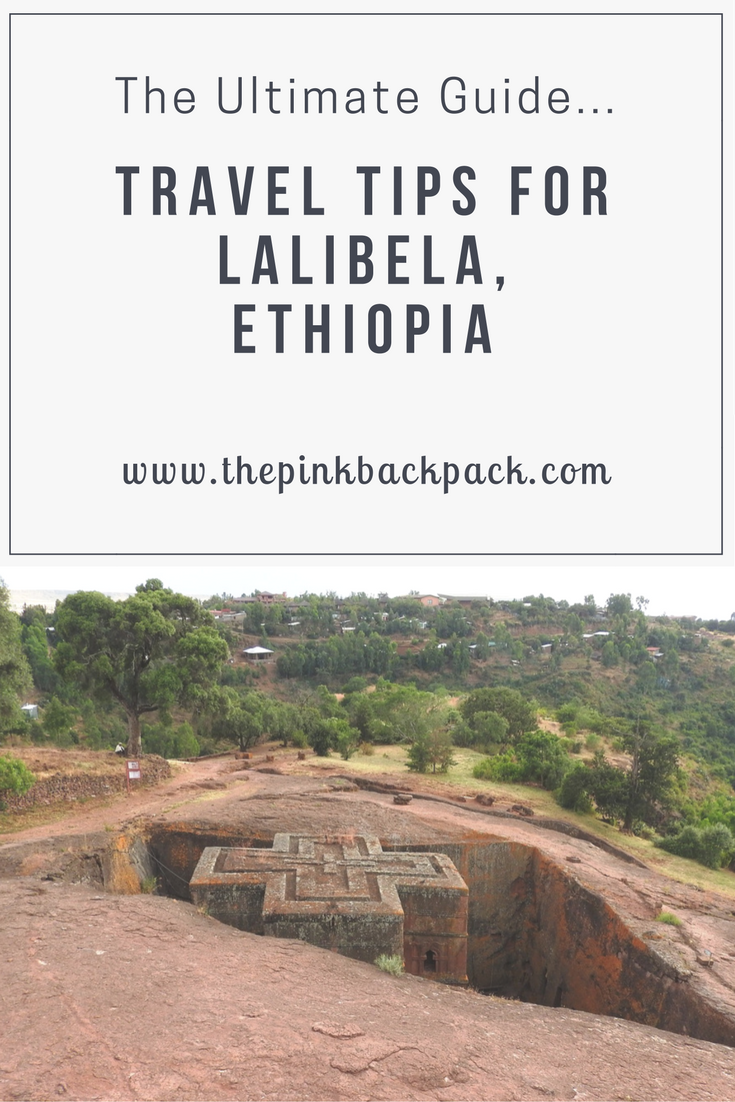 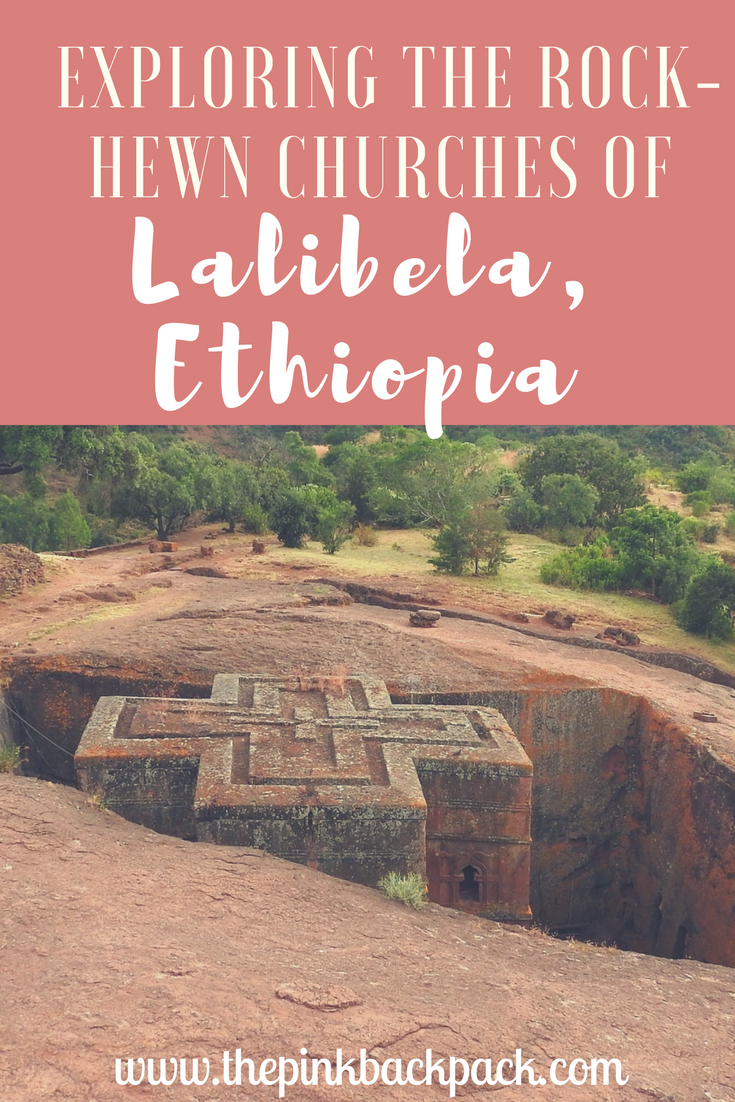 A big thank you to Ghion tours for planning this trip for me and to the Mountain View hotel for hosting me!

As always, my opinions are honest representations of my own experiences.

Your Guide to Ekewere Island, Tanzania

Getting PADI certified in Zanzibar, Tanzania

How to get to Gombe National Park, Tanzania

You May Also Enjoy:

How to Start a Travel Blog

How I Afford to Travel (Debt-Free) while doing a PhD

How to Use Skyscanner to find CHEAP Flights

How I use EBATES to Save for Travel

How I Hacked a FREE Flight to Iceland

The 7 Craziest Things I’ve Done to Afford to Travel

6 Ways to Travel as a student for FREE

Maseresha said:
Great photos thanks for sharing the experience
Kate K. said:
Not many people travel to Ethiopia, so I loved reading through this. So many beautiful church buildings!
Daniel said:
Thanks Steph, for visiting Lalibela and take your time to write about your experience. Let me please know next time you are in Lalibela, I would love to take to the highlands above where my communities are. We have very beautiful mountains and wild-and wild life. Ofcourse my community will love to have you take part in their daily activity, maybe cooking, on the farm field, milk cow, or teach in the school :)
Roxanne Reid said:
Oh wow, Lalibela - and Ethiopia in general - is still on my list of places to go. I love culture and history so it sounds as though it would be a great fit.
leigh swansborough said:
this is a wonderful post. As I prepare to walk the 800 mile California Mission Walk, it's nice to see the rock-hewn churches of Ethopia.I have never considered visiting Ethopia; however, you have changed my mind.