The island of Kythnos is part of the Western Cyclades and just a 3 hour ferry ride from Athens. Yet, prior to visiting Kythnos in late 2020, when I moved to the island during the pandemic, I had never even heard of it.

Instead, the big daddy islands like Santorini and Mykonos dominate the travel bucket lists of many international tourists. Unfortunately, with their fame comes the expensive prices, crowds and an overall ‘touristy’ feel.

That’s why after living on the island of Kythnos for two months, I think it could actually be one of the most underrated Greek islands. 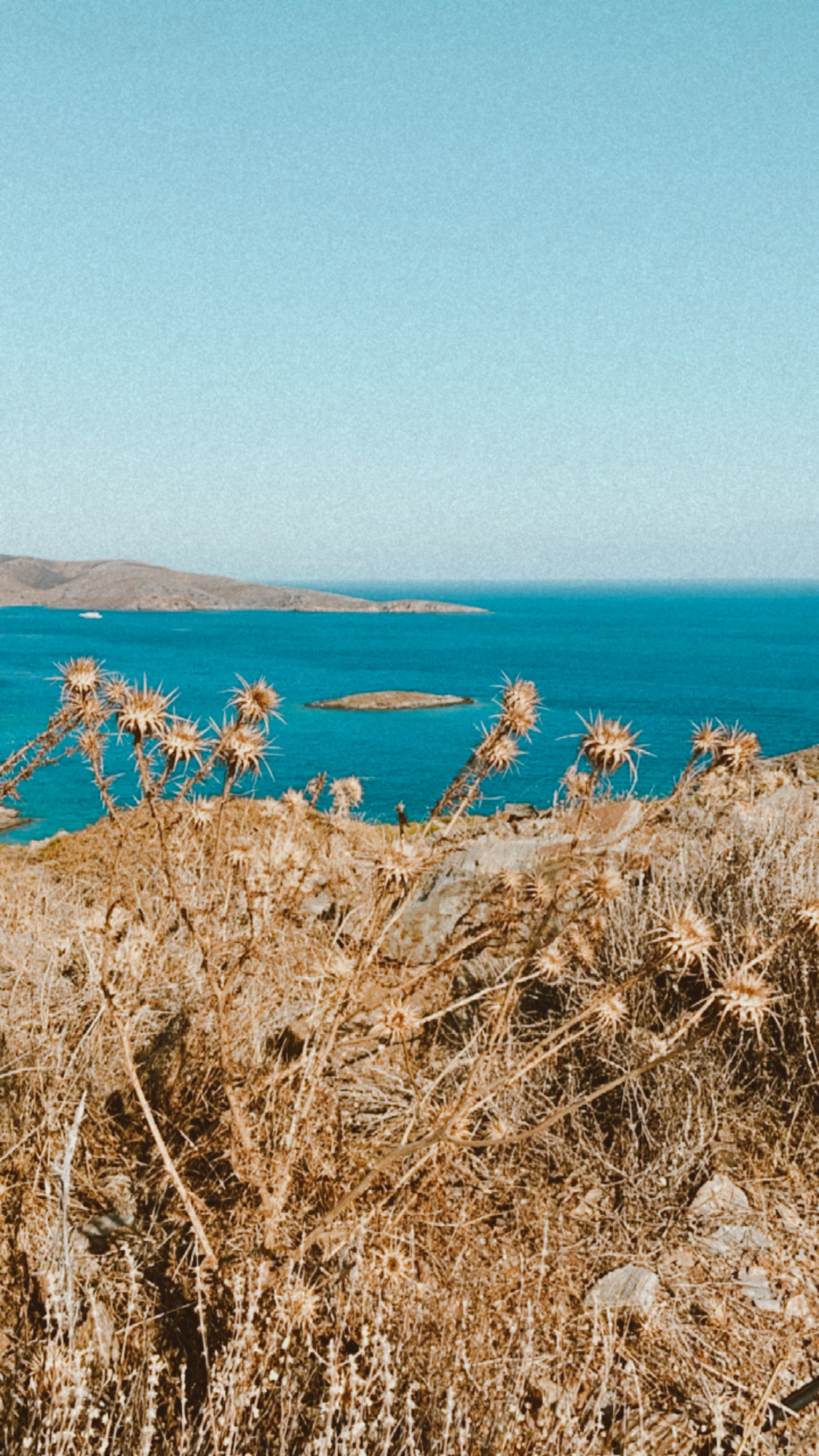 Why Kythnos is the most Underrated Greek Island in the Cyclades 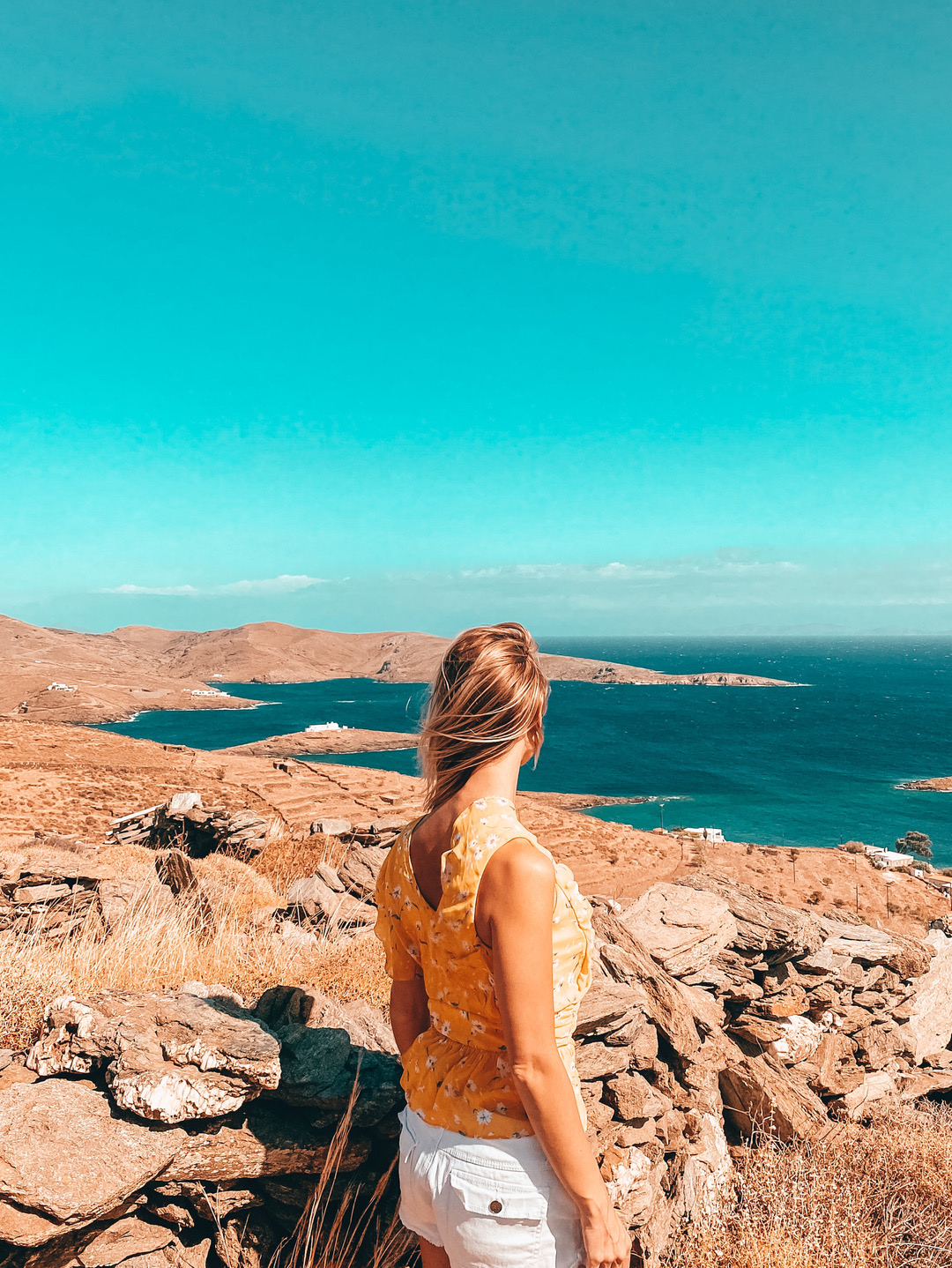 Despite its picturesque landscapes, Kythnos is relatively quiet as far as tourist destinations go. Granted, I stayed on Kythnos during the second wave of the pandemic and during the off-season, so not too many international tourists were coming and going. 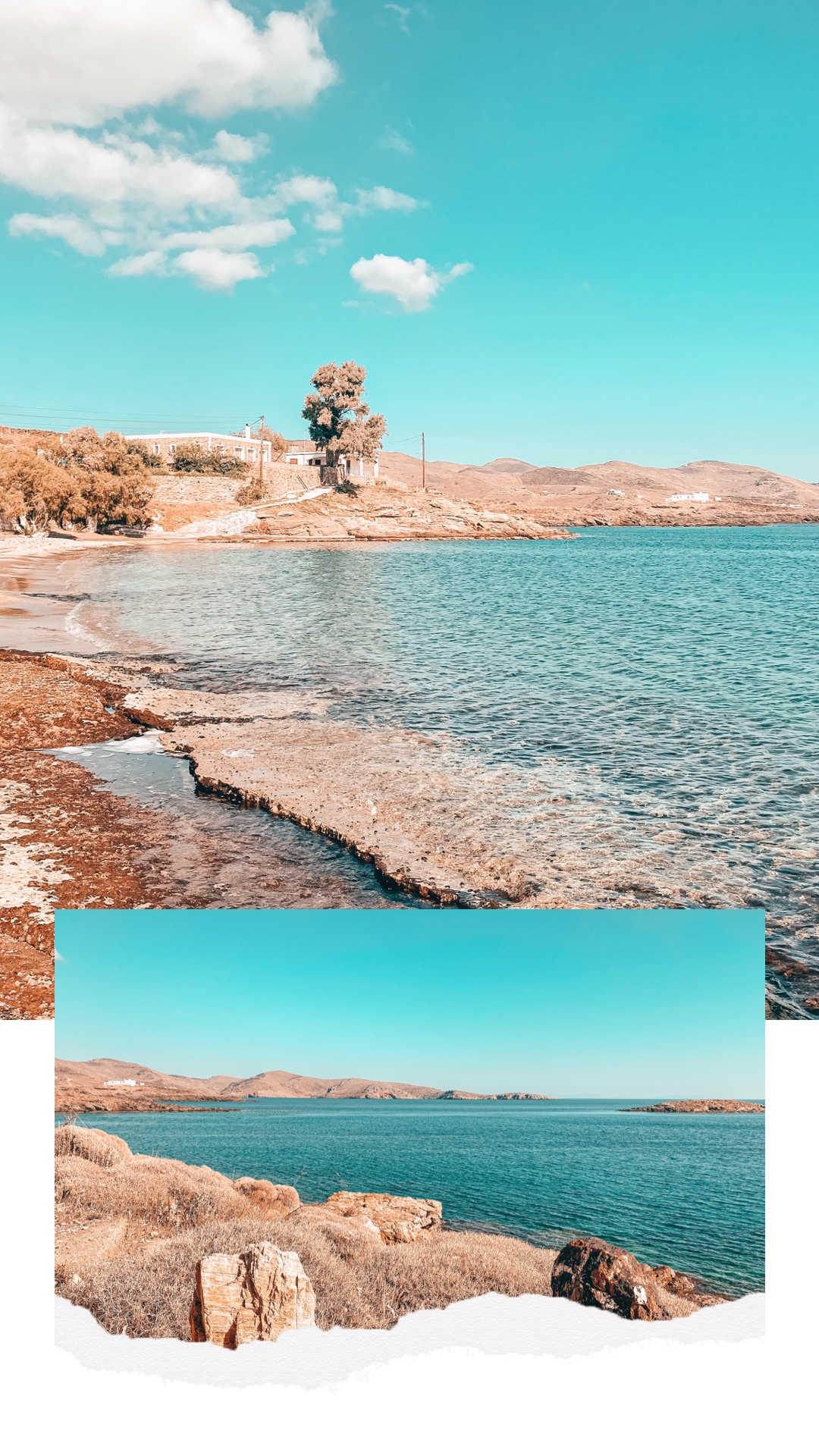 I got the sense that most of the tourists frequenting Kythnos were Greeks themselves. When international travellers did come,  their reaction was vastly the same as mine was after comparing Kythnos to the bigger islands: “wow, it’s so quiet here!”

I personally loved that the beaches I went to were quiet and I could enjoy the water all to myself without loud and chaotic crowds. 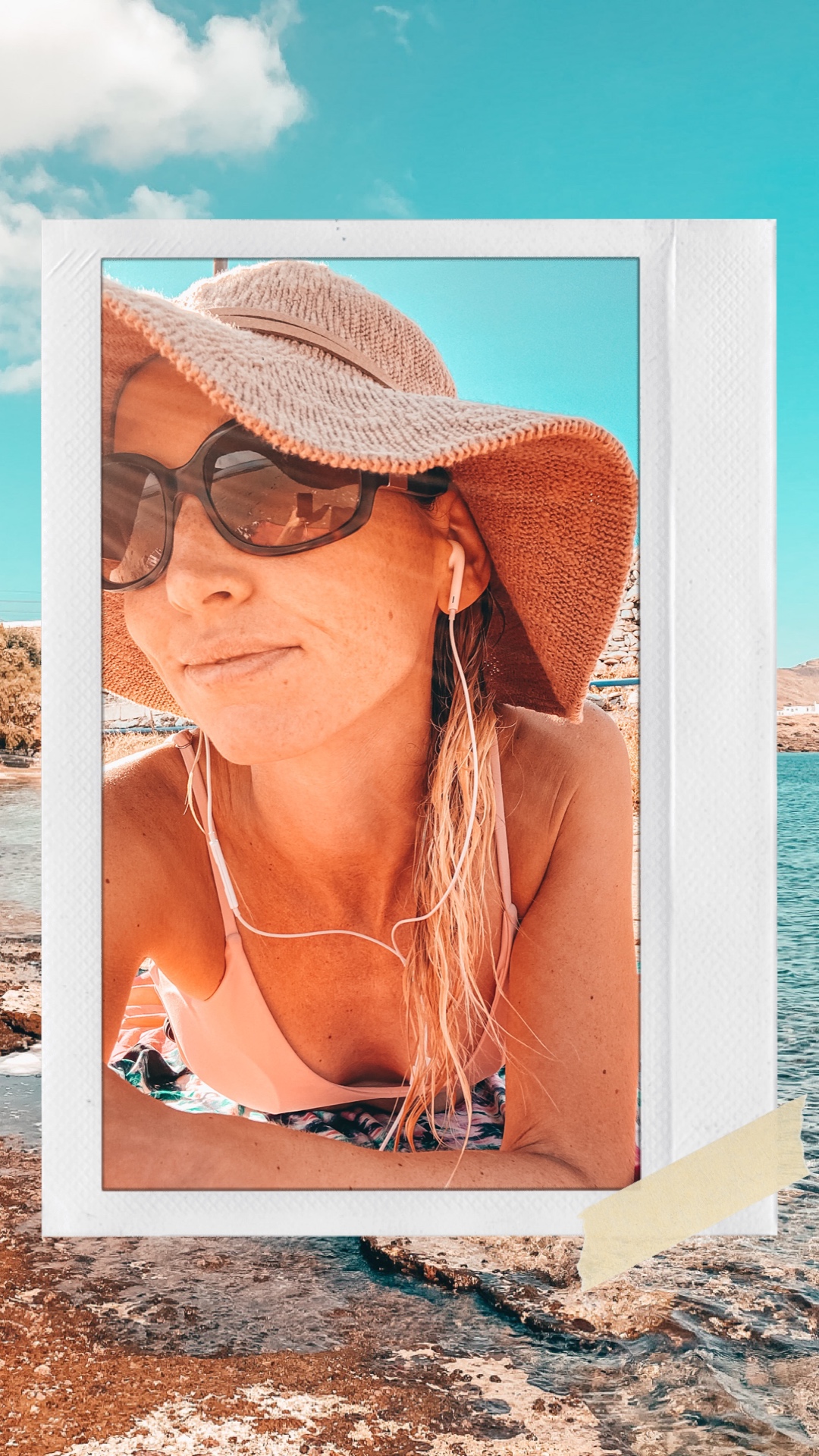 I learned after walking through some of the communities that not too many folks spoke English, which just proved to me that this is an island still largely ‘unchanged’ by tourism.

Yes of course there are some restaurants, spas and tours that cater to visitors, but what I mean by unchanged is that the actual lives of the people who live on Kythnos and the island’s nature do not seem to be negatively impacted by tourism. This not only made me feel good about traveling there, but it gave the island an authentic feel. 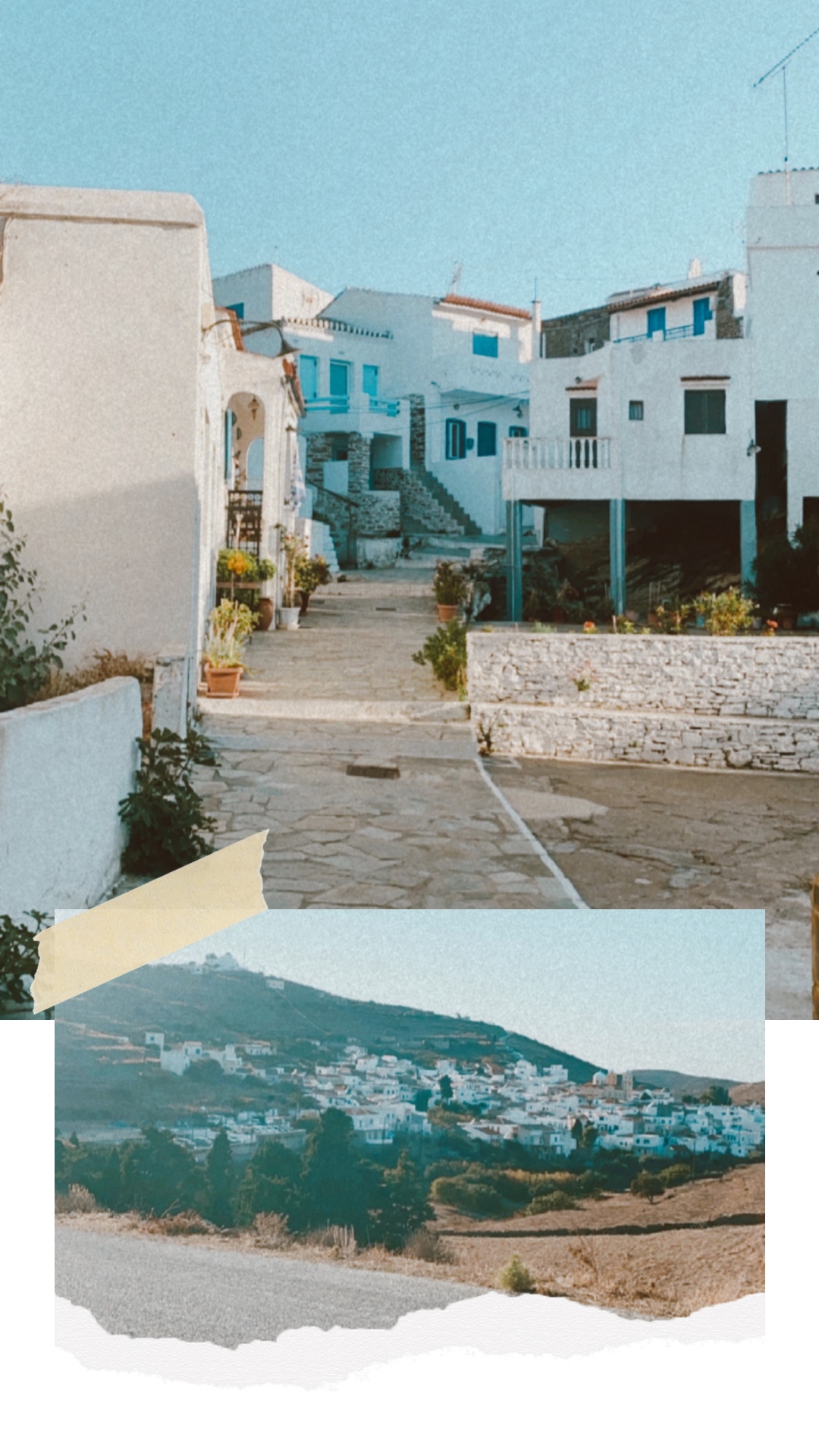 Instead, getting lost in the labyrinth of Dryopida and admiring its winding pathways and architecture felt like I’d stepped inside a time capsule.

I later learned from my friend George at Experience Kythnos, that the settlement of Dryopida was originally built in a maze-like pattern in a valley away from the water to ward off pirates. 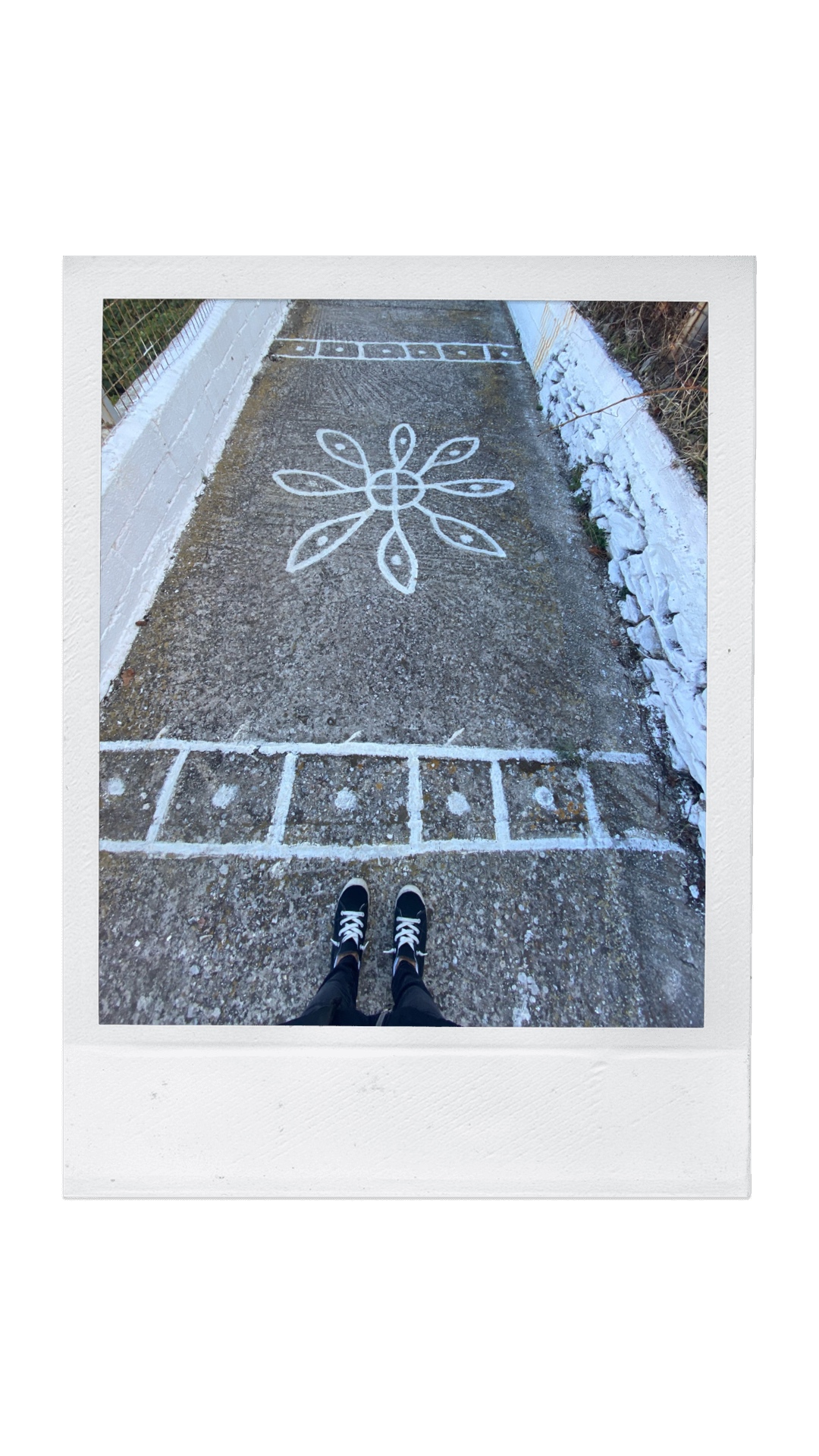 If you want to go somewhere you can get lost on the path less travelled (literally and figuratively), then this is the place for you.

The island is rustic in its natural beauty, with green rolling hills abundant with wild herbs like sage, thyme and saffron. 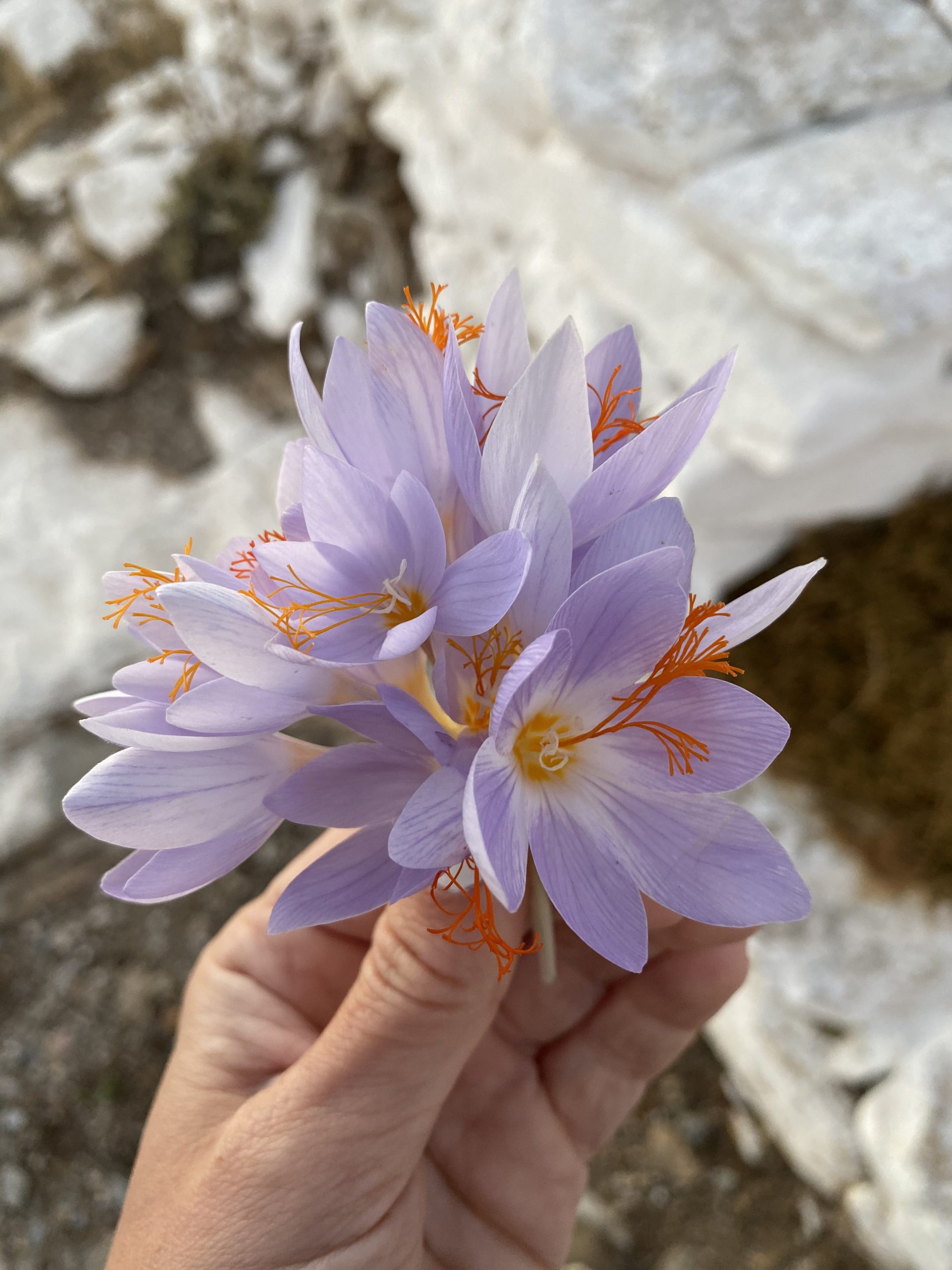 The air even smells organic, like an earthy mix of herbs and sea salt. Each morning I’d wake at sunrise, taking in delicious gulps of the fresh air while sipping my coffee. The island has some of the best sunrises I’ve seen to date. 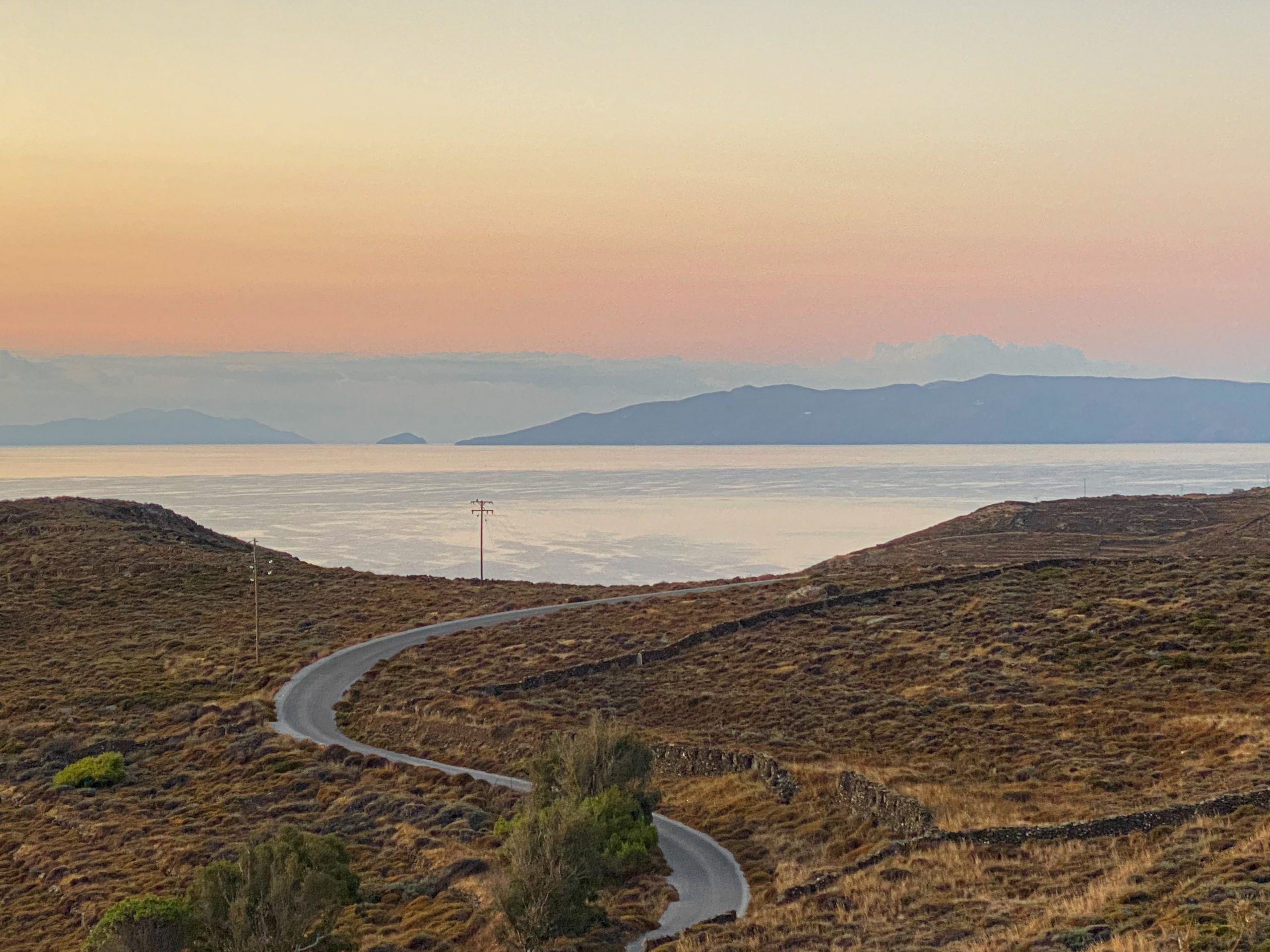 The sun rising over the Aegean sea

During my many walks throughout the hilly landscapes of Kythnos, I’d often come across goats. I even had an entire group of them (which I have just learned via Google search is called a ‘trip’) graze outside my house rental, alerting me to their presence with the clinking and clanking of their belled collars. 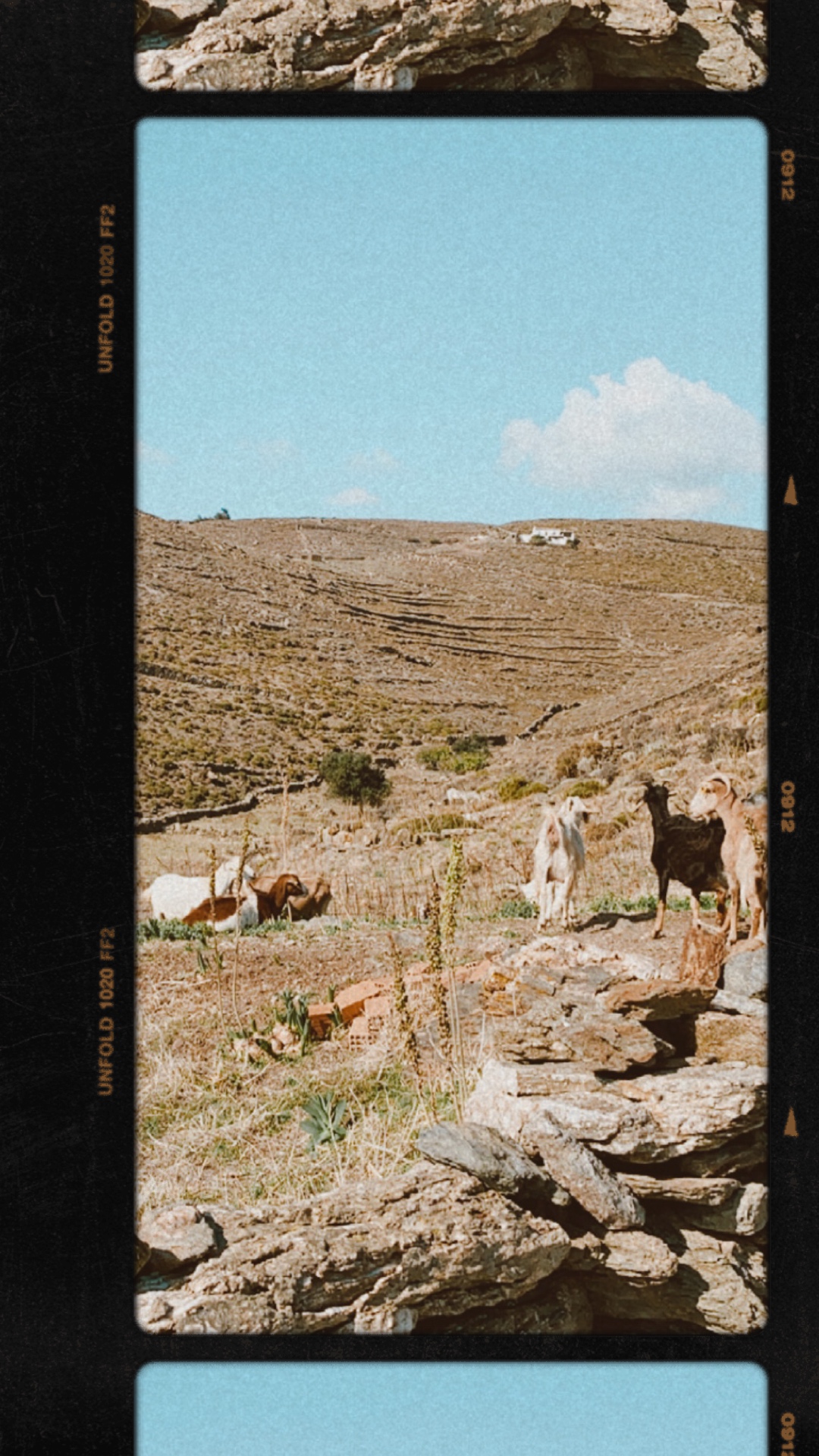 I absolutely loved that the island had so much untouched nature. It’s a rustic charm that unfortunately, I don’t experience too often during my travels as the world rapidly urbanizes.

Kythnos has SO many beaches

Kythnos has a reported 70 beaches, which is insane for a small island of just 100 squared kilometers (62 miles). 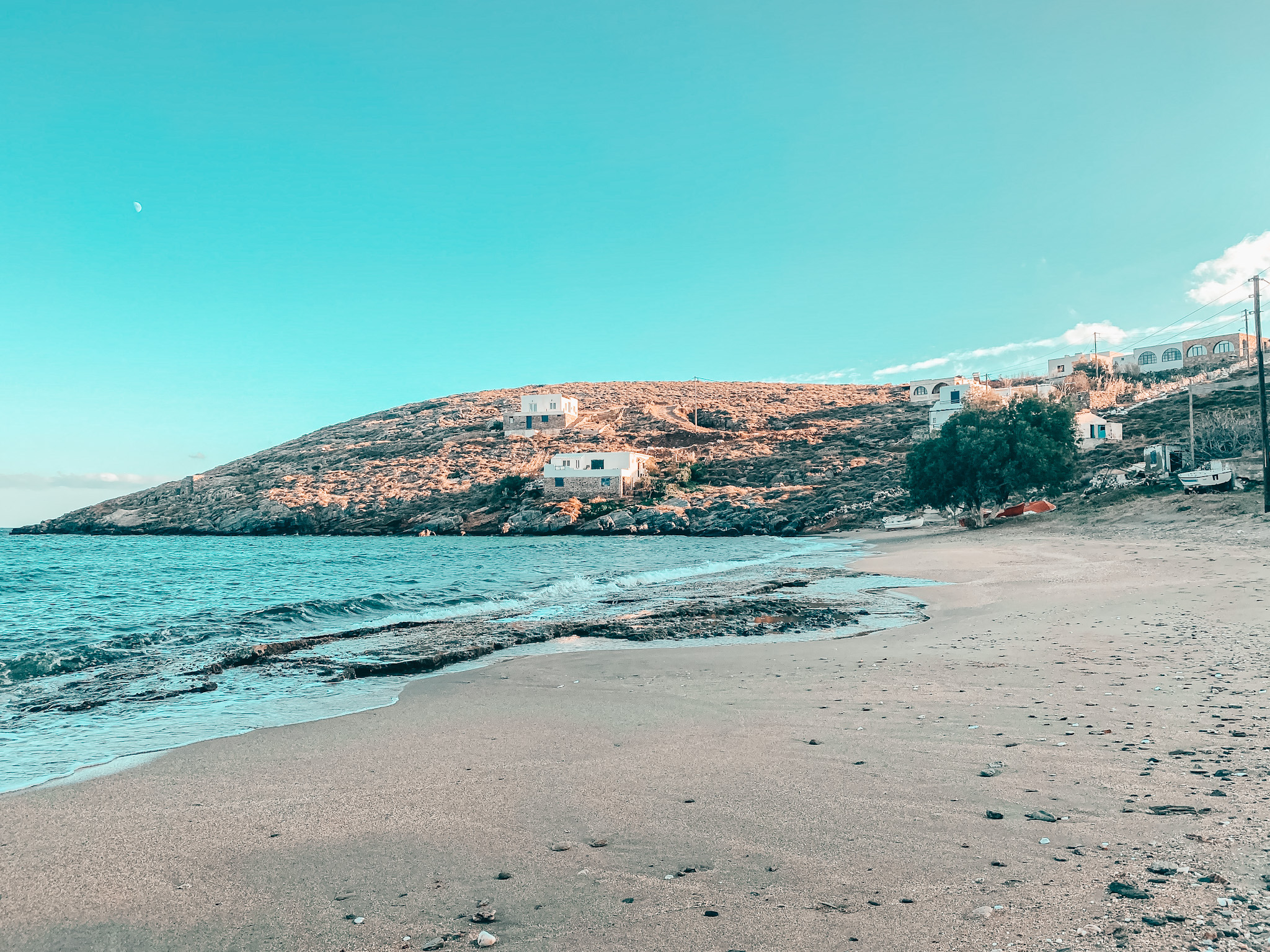 My favourites were on the Eastern side of the island where I stayed, as I could easily walk to them. Depending on the day, I’d rotate between Zogaki beach, Kouri beach, Paralia beach and Lefkes beach. 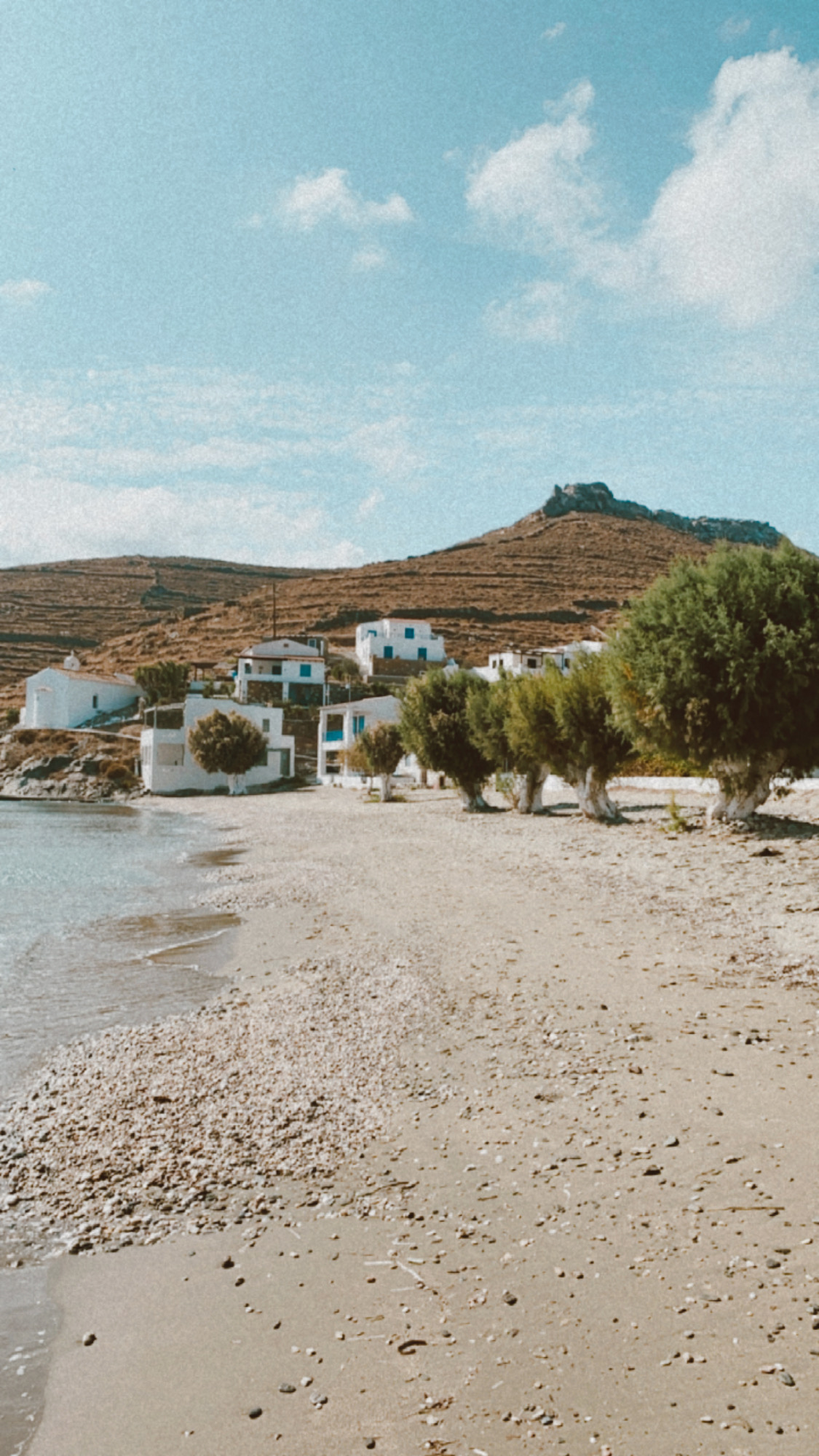 Related | I moved to a Greek island during the global pandemic

It has Gorgeous churches

The entire island is filled with gorgeous churches like the two pictured directly below, which are by and large open to anyone to enter. 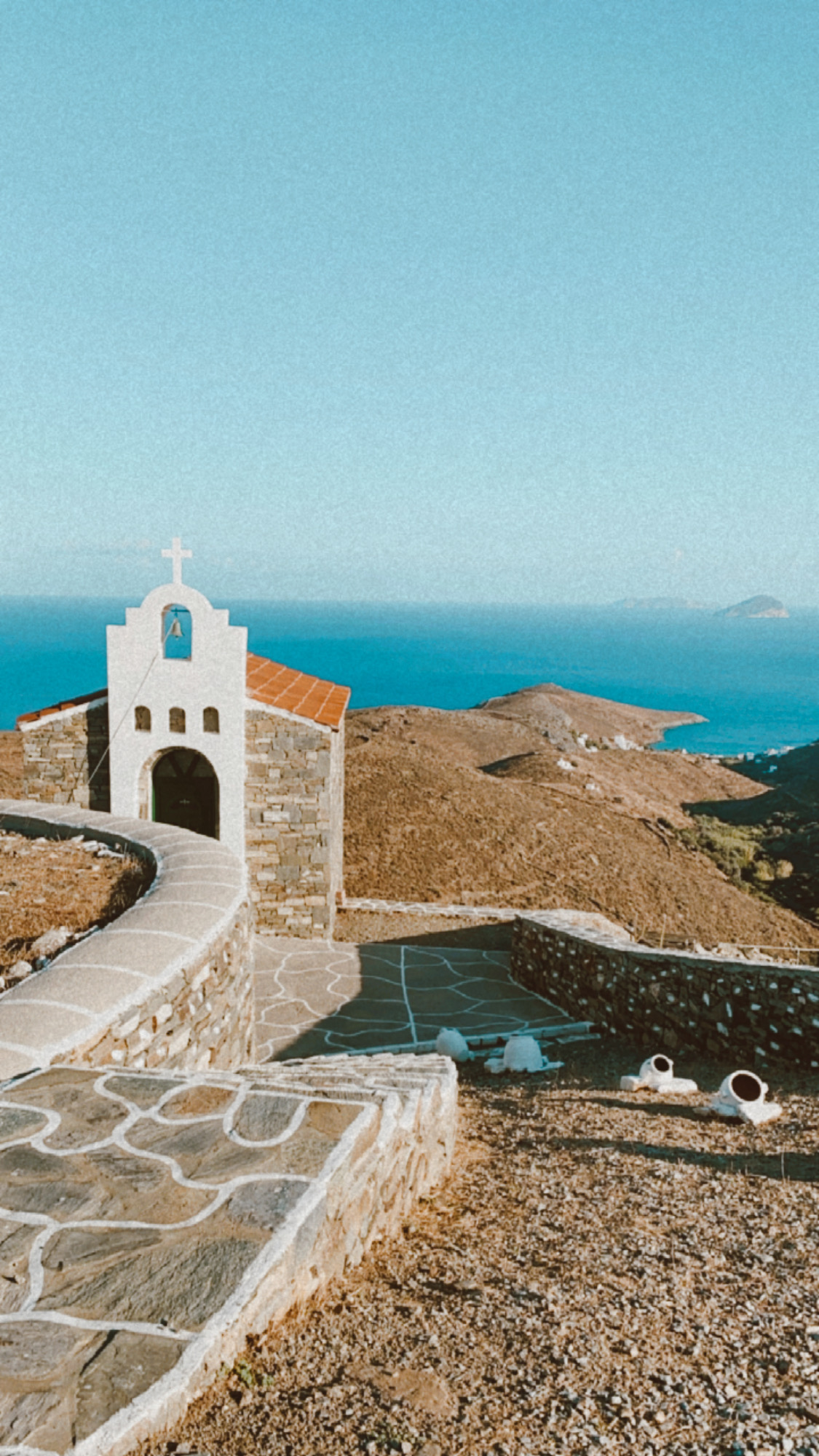 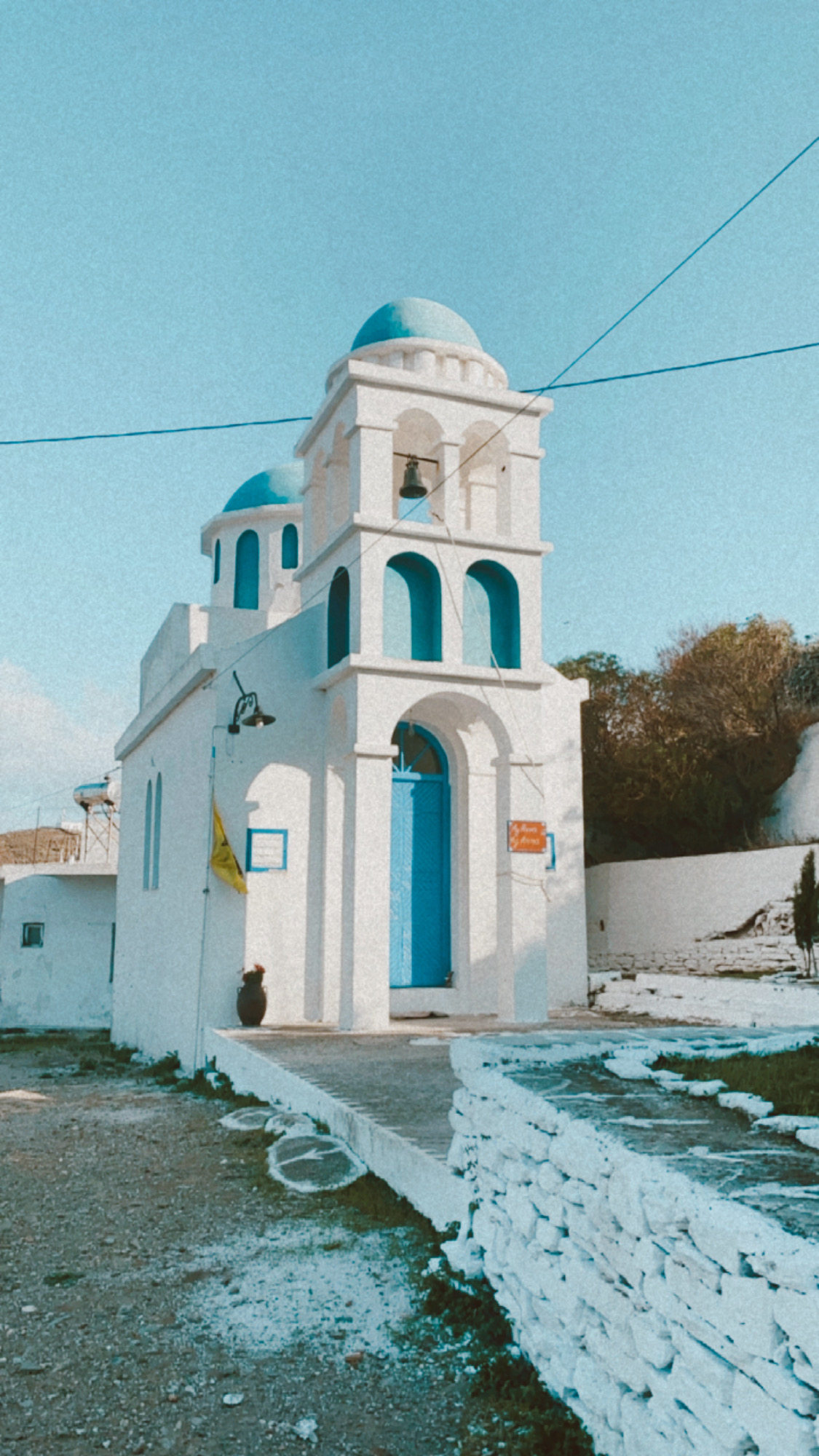 From Paralia beach on the East side of the island, you can continue walking to the famous St. John’s church. It’s a beautiful place perched high on top of a tiny piece of land separated from the main island by a thin walkway, giving it the appearance of being on a mini island. 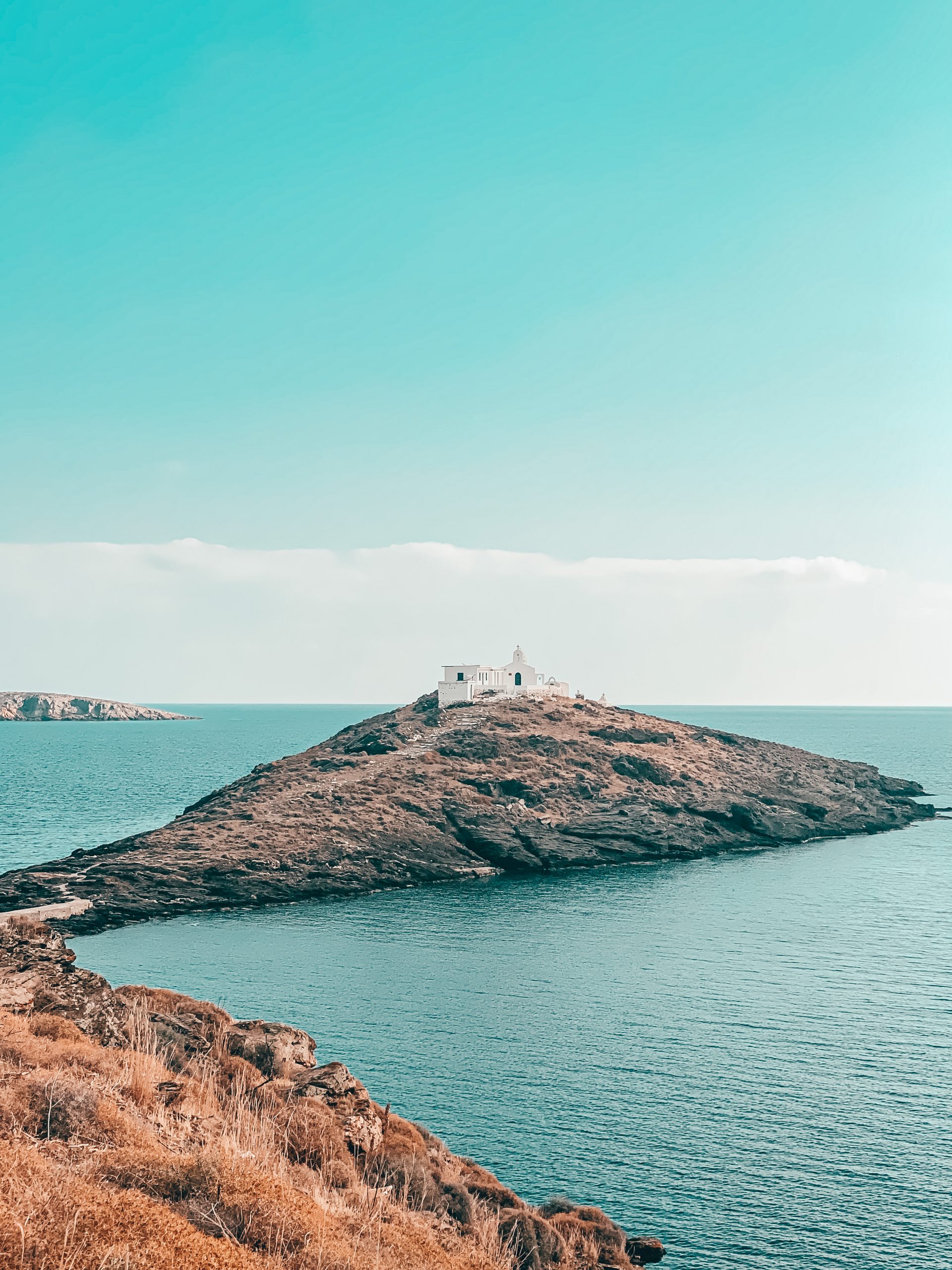 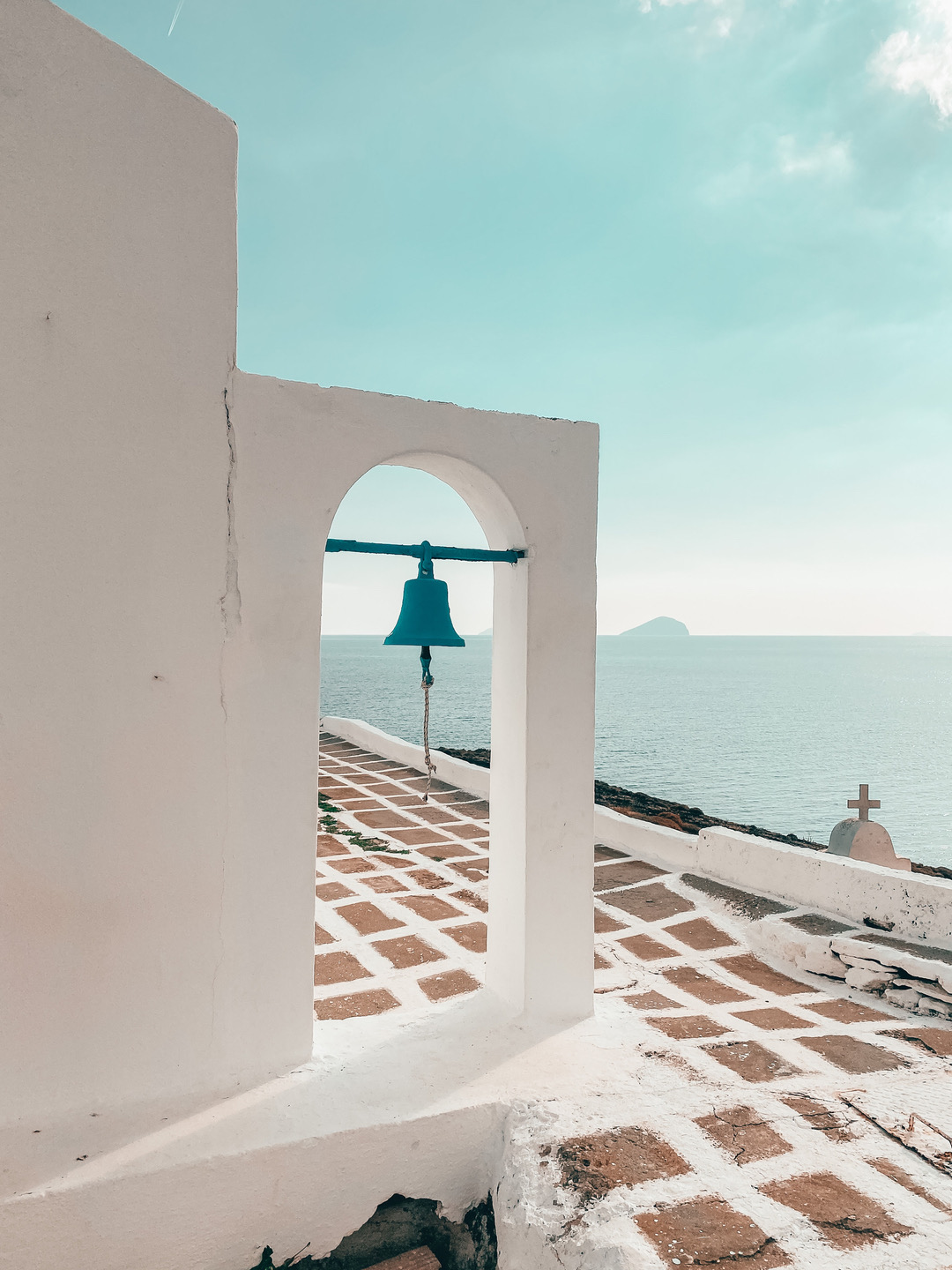 Just outside the entrance to Lefkes, there is an opening to an old iron mine which has a tunnel all the way to Dryopida town! I didn’t take the tunnel, but it is possible to walk all the way there through it. I did explore the cave in Dryopida though and would recommend it! 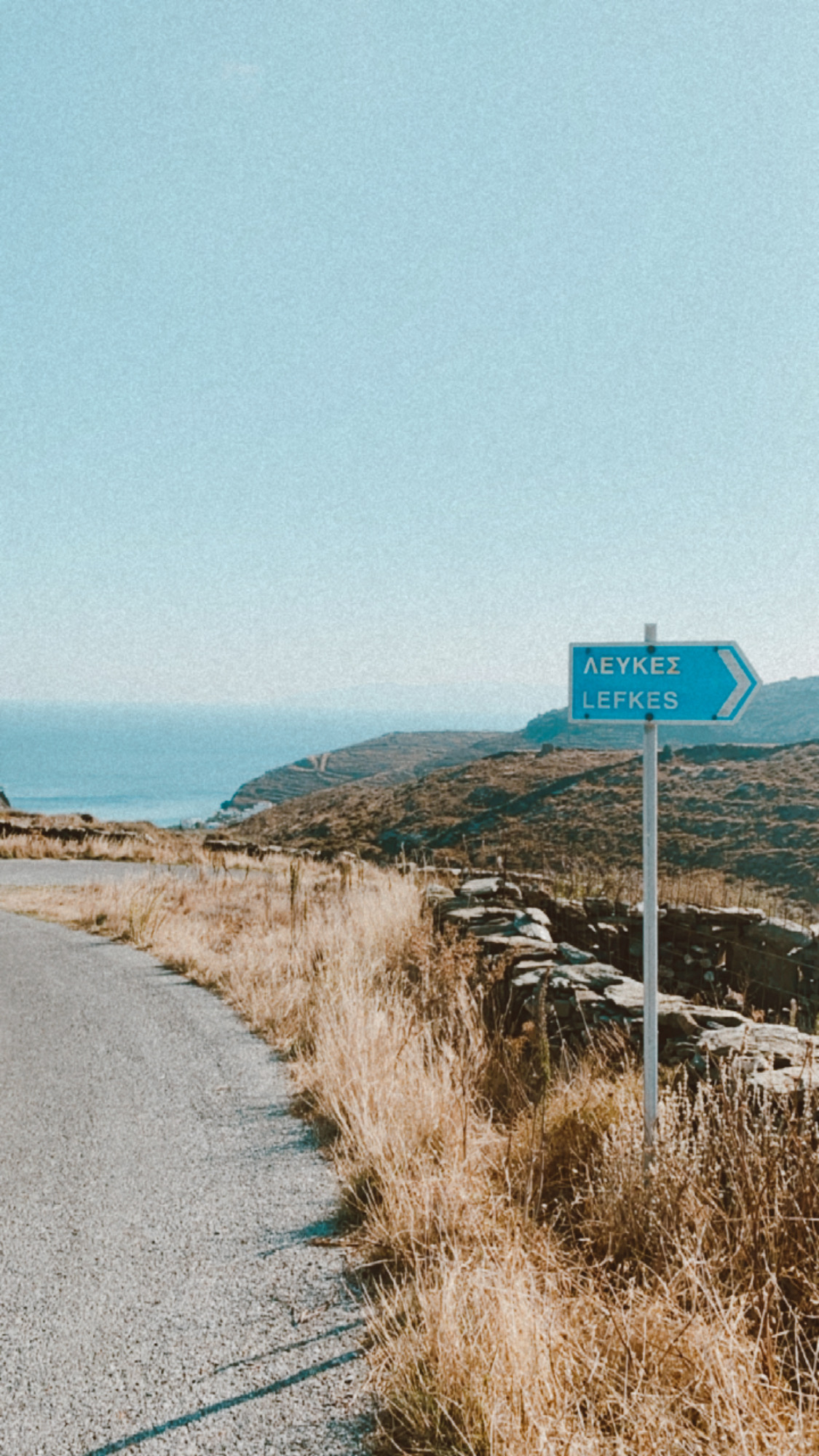 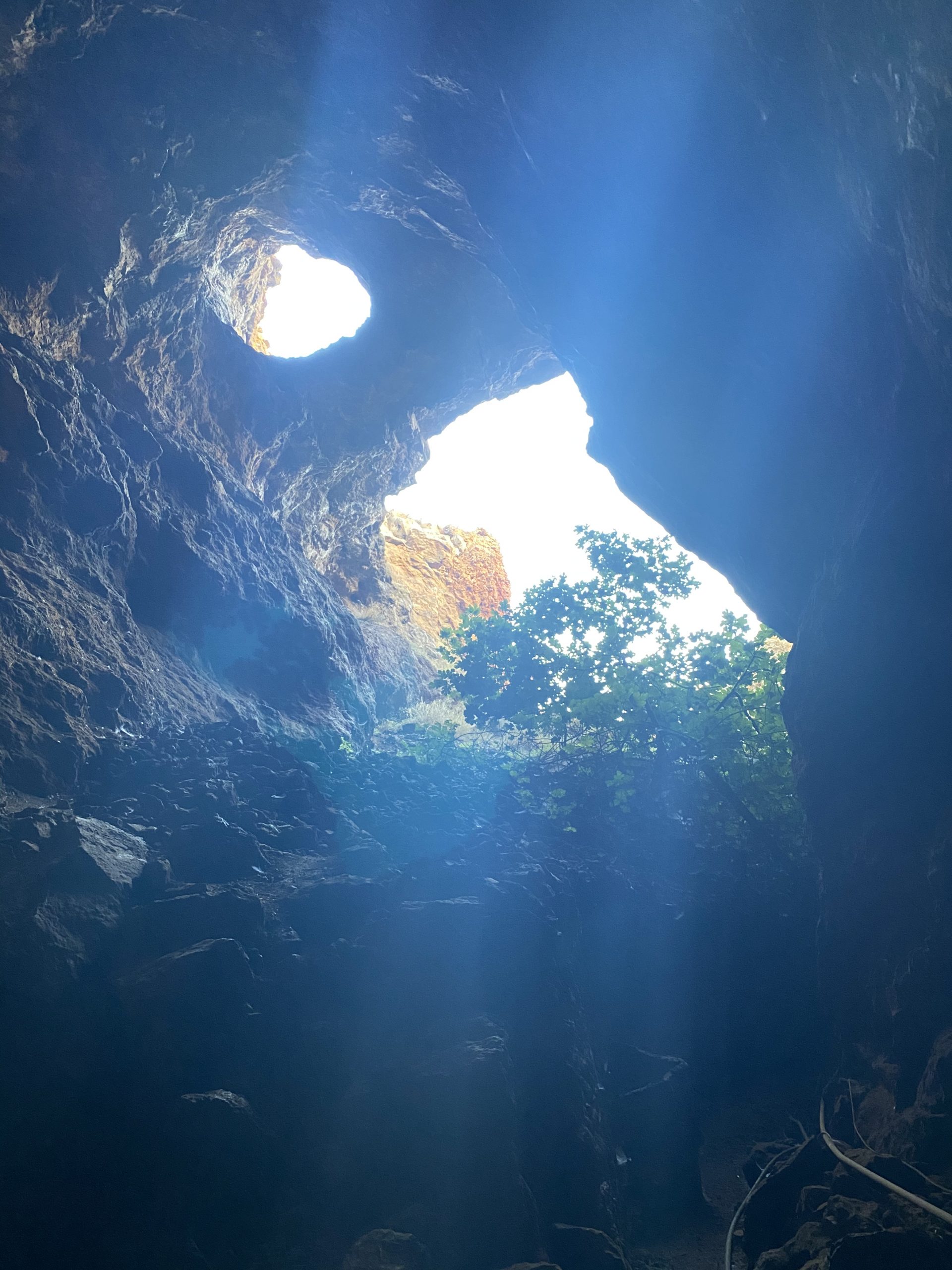 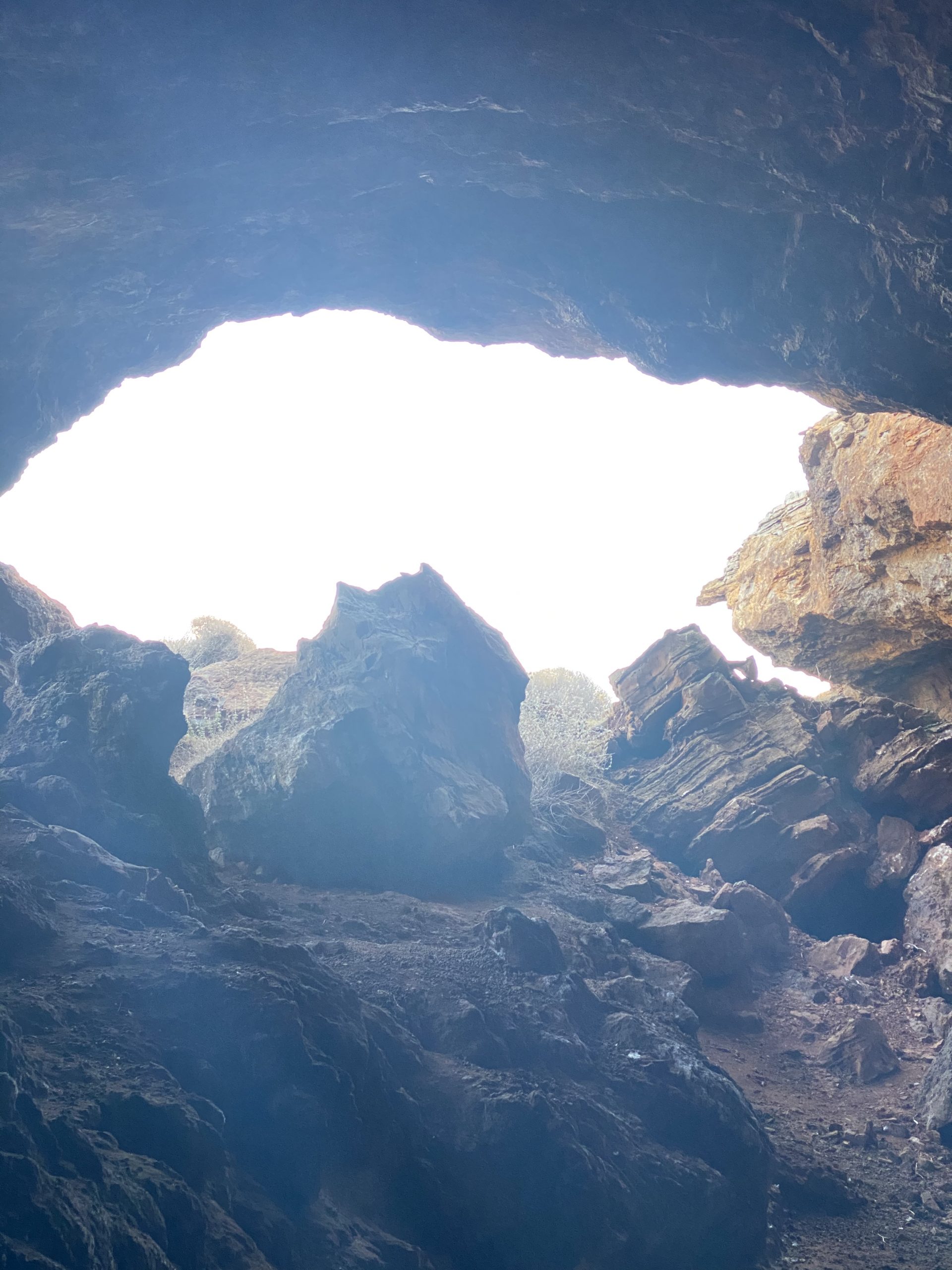 It has Ancient History

Kythnos is home to several ancient archeological sites, which apparently have professional digs each season in search for remaining artifacts.

It’s possible to do several different hikes to these ancient landmarks and sites and I recommend George from Experience Kythnos. We went to a castle (pictured below), as well as a site that used to be the island’s capital in ancient times where a tomb and fragments of a temple floor remain (bottom picture). 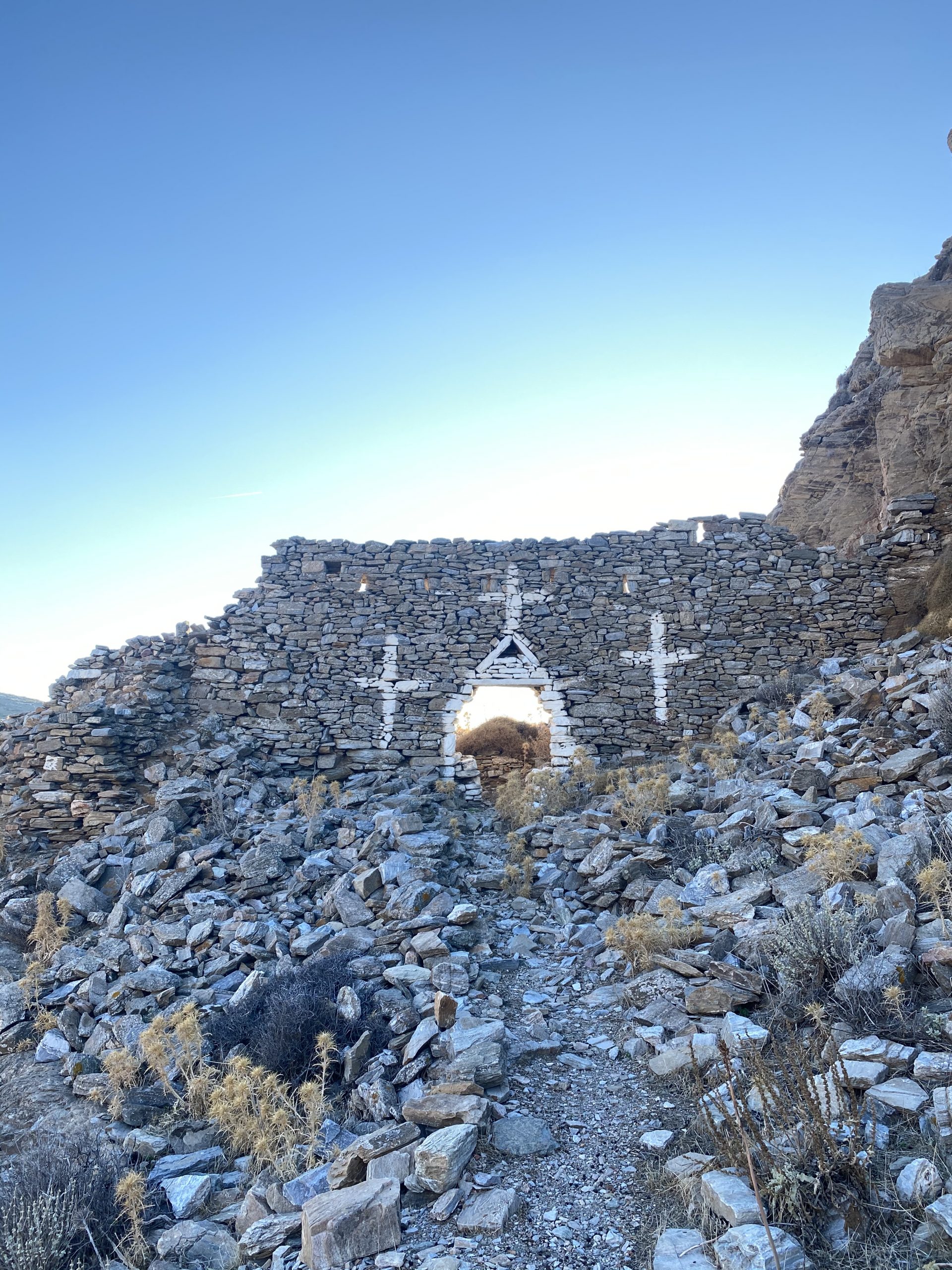 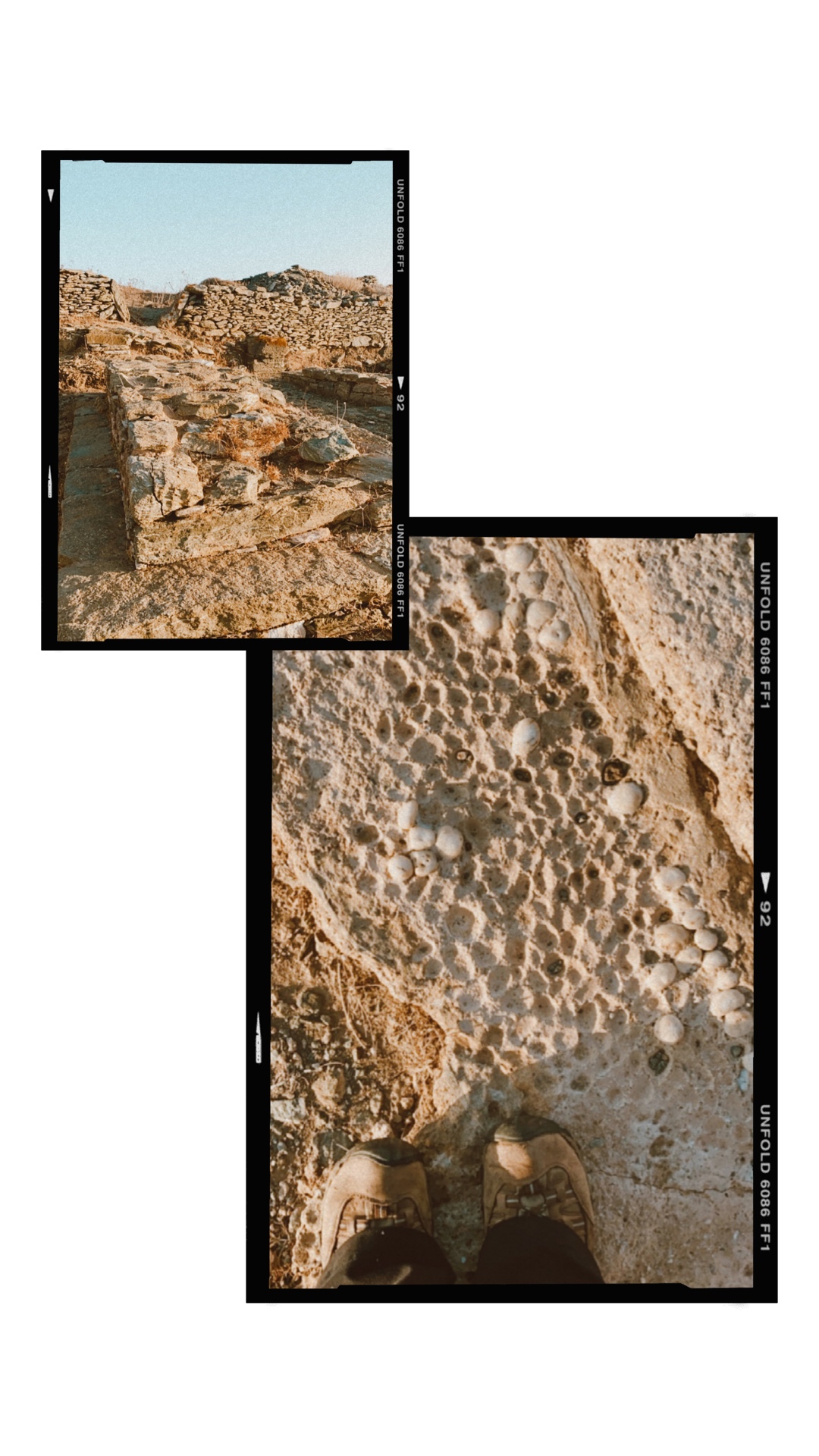 I really enjoyed learning about the history, while simultaneously walking through the sites that had fragments of castle or temple walls remaining from many centuries ago. There is something magical about standing in such a place, imaging what occurred there long before our time.

Kythnos island boasts natural hot springs embedded right within the shoreline in the tiny town of Loutra. It’s basically like going to the beach and wading into the water, except the water is wonderfully warm!

I went to the hot spring after a hike, which in my opinion is the perfect way to take a well-deserved rest!

Pro tip: Bring a cold beer to enjoy in the water!

So, have I convinced you to add the island of Kythnos to your travel list yet?! 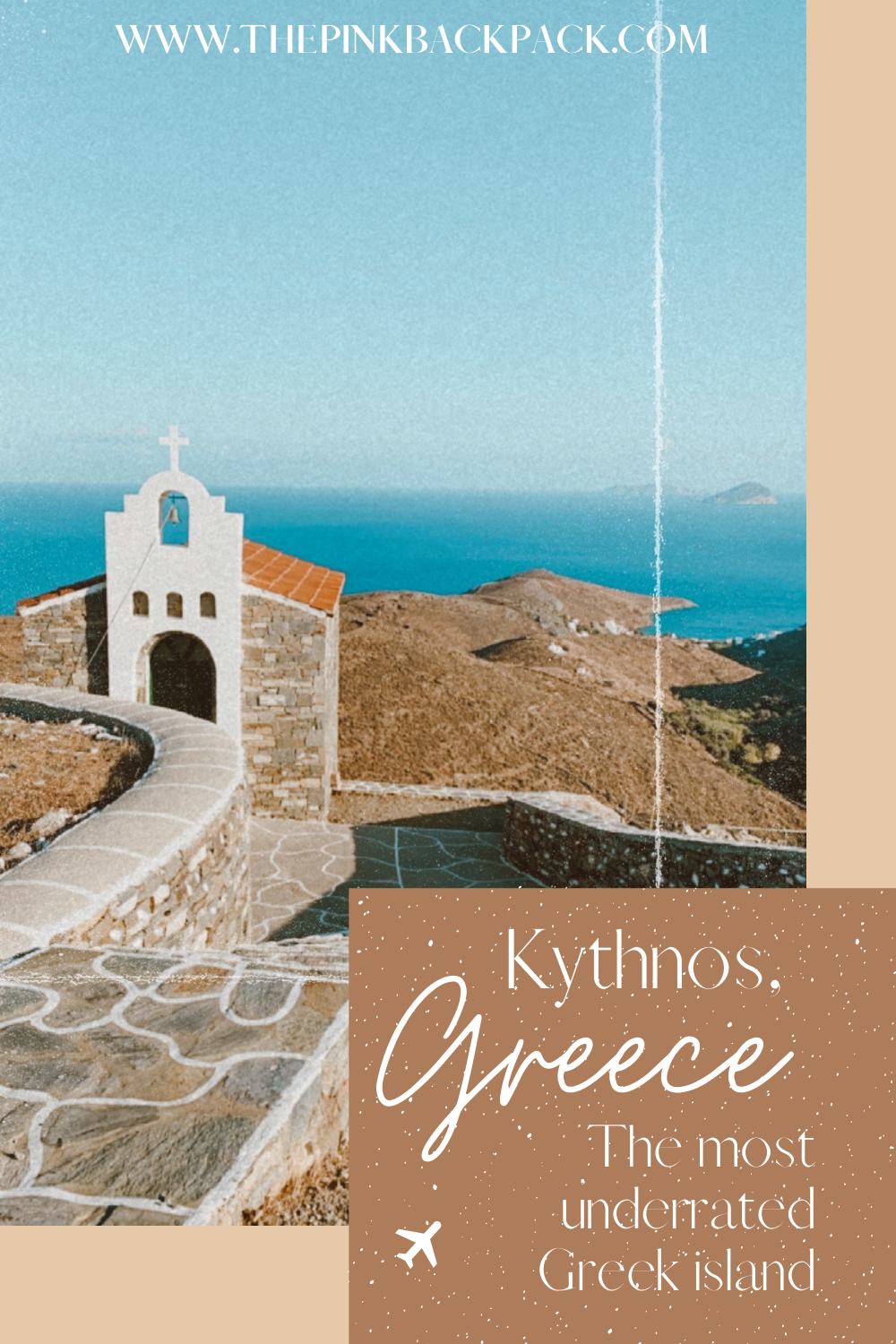