Finding Home through a Pint Glass: Pubs and Pals in Killarney, Ireland

This article was sponsored by the Black Sheep Hostel 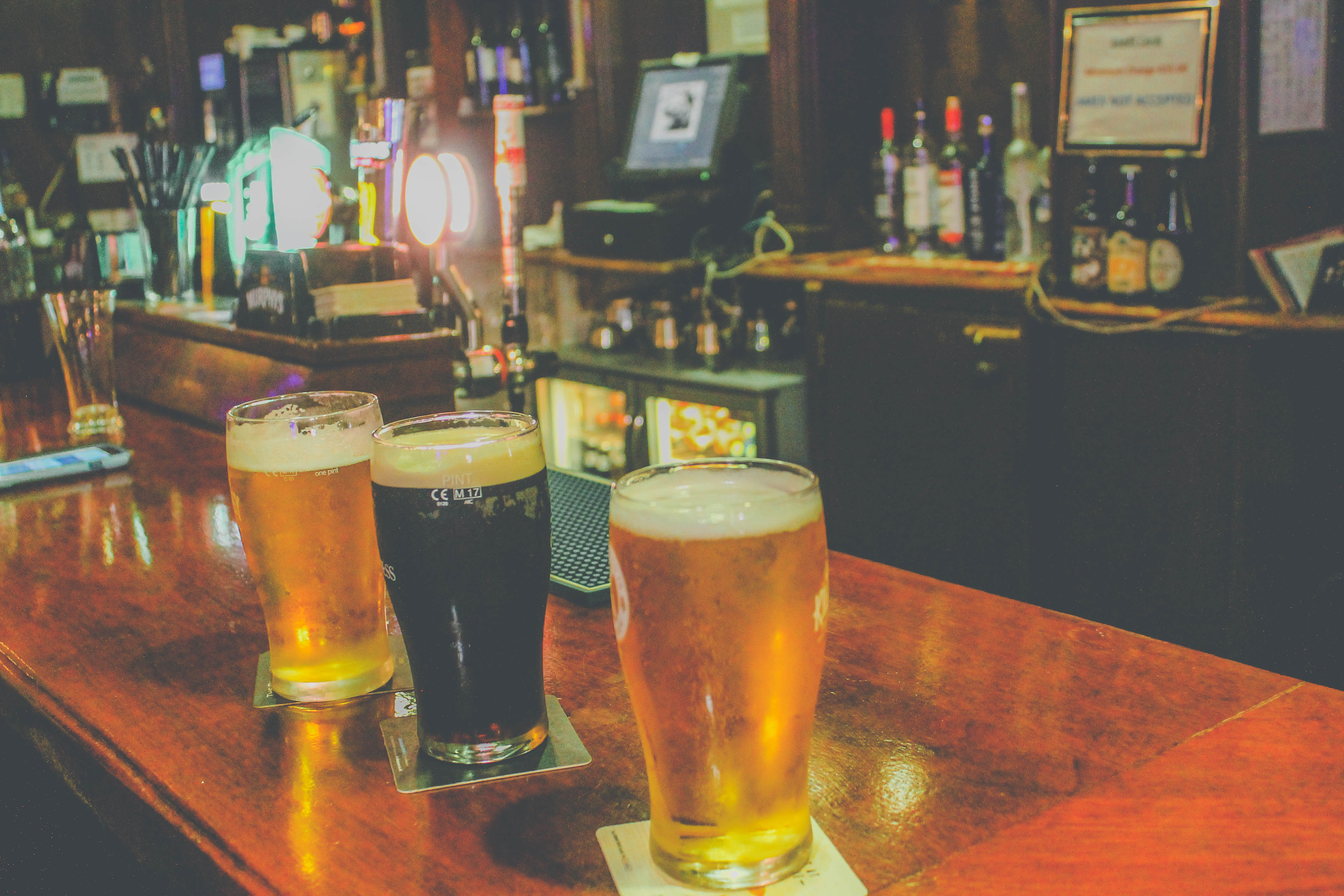 I watched as the bartender poured pint after pint; a seamless and habitual task for him and yet I was captivated. Truth be told, I was intoxicated by it all. Settled on my barstool, I leaned back and gazed around. The band played a crowd-pleasing fiddle tune, igniting just enough dance to fog up the windows. Laughter and boisterous banter echoed through the tavern, creating the kind of enlivening energy that makes it impossible to be sad. I was leaving town tomorrow, but despite my animated surroundings I felt mixed; somehow already nostalgic about an experience that hadn’t quite ended.

I ordered a drink and waited, allowing my mind to wander through the events of my trip, settling on the night I first arrived. It was a mere week ago, yet it felt like ages. Killarney, I would learn has this magical effect on its guests. It’s the kind of place where time slows down and visits are extended; a place where travellers can find solace; a sliver of home away from home. For me, it wasn’t just the free-flowing beer and vivacious music that generated this feeling – it was most certainly the people.

I checked into the Black Sheep Hostel on that first night, feeling the onerous weight of my backpack and the red-eye journey I just made. The scent of fresh Irish stew lingered in the air and groups of travellers and locals alike relaxed to live acoustic music. The excitement of having just arrived far outweighed my jetlag, so I joined the group – or rather, the group took me in. The hostel’s honorary mascot ‘Bob’, a wire-haired dachshund, periodically shuffled in and out of the room, mischievously snatching a bag of bread from the kitchen, instigating a fit of laughter from his audience.

Eventually when the music tapered at the hostel, I was led to Murphy’s pub, where I gingerly perched atop a bar stool, clapping to the rhythm of an unfamiliar tune. I ordered a pint, eager with anticipation for my first sip. I was already onto my 3rd when we relocated to the town’s nightclub: a ‘grandiose’ place with inebriated patrons dancing to an ear-piercing cover-band. To my surprise, when last call hit and the crowd began to thin, the party did not slow down. For a select few, the doors locked and the music and drinking continued until the wee hours of the morning, resulting in my tumultuous stumble back to the hostel at a most un-godly hour.

As it turns out, pints shared with new friends was the common thread of my week in Killarney.

There was a night at ‘The Shire’, a Lord of the Rings themed pub, where I joined travel bloggers in town for a conference for drinks in ‘Middle Earth’. As I sipped my beverage, I felt a tap from behind and turned, nearly jumping out of my skin and choking on my drink in the process. Gollum had made an appearance, singling me out of the crowd to torment. The reality of fraternizing with a group of bloggers is this: your most embarrassing moments (including an up-close-and-personal exchange with Sméagol) can, and will be recorded.

Then, there was a night at the town’s race track, where an innocent Powers Irish Whiskey tasting turned into 4 shots of the ‘water of life’ back-to-back. A substandard whiskey connoisseur, but a master of disguise, I managed to mask my distaste for the liquor with chasers of the ‘welcome beer’ we received upon arrival. After incredible Irish dance and drumming performances, we were shuttled back to town on a coach bus to yet another pub. We teetered off the bus in single file fashion, only to realize on the cobblestone curb we were one person down. I had never laughed so hard when we learned our missing friend had been trapped inside the bus toilet the entire ride.

Or the night of my 29th birthday, when new friends ensured I felt special. As we celebrated at the pub over pints of Killarney Pale Ale and cheap shots of tequila, they arranged for the band to play a cheesy ‘Happy Birthday’ tune dedicated to yours truly.

So as I sat on that barstool on my final night in Killarney, reminiscing about the music, the laughs and the good times over the last week, I understood my mixed feelings about leaving resided in the impending goodbyes. The next day, I would part ways with new friends and the hostel where it had all started. In this nostalgic moment, I realized that maybe for some of us ‘home’ isn’t just the roof over our head; home is the best friends and the love found half way around the world. Home is in the people who make us feel alive.

I snapped back to reality as the bartender pushed a pint of velvety, black gold across the bar top towards me. I handed him over the last of my coins and picked up the frosty, glass of Guinness. He wouldn’t hear me over the music, but I still called out after him anyway, “Sláinte!”.

I turned to my new friends and clinked glasses, before taking a long pull from my beer.

Have you ever found a place that feels like home on the road? 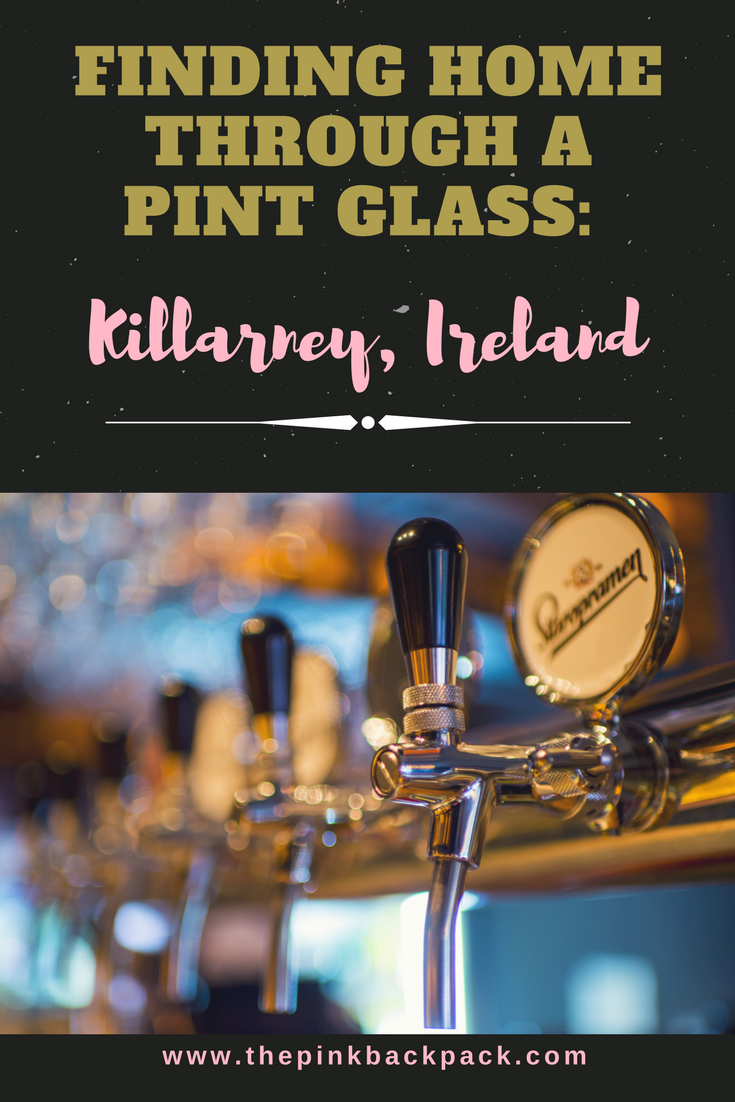 A special thank you to the Black Sheep Hostel for taking me in and for being a home away from home in Killarney.

You can reach them to book your own stay via email, or find them on Facebook and Twitter!

Friends in Low Places: Getting Stuck in a Ditch and a 35K Car Rental

Amy Poulton - Page Traveller said:
Hey Steph, Happy Birthday! And I loved this post. I totally agree that home is somewhere that can be redefined - it doesn't need to be one place. Often, it's the people that make it special. Thanks for sharing!
thepinkbackpack.com said:
It hasn't let me down yet either :) haha
Sheree said:
Hahahahaha this is great!! My favourite way to experience new countries is just finding a bar and having a few drinks - it's never let me down! My husband is dead keen on visiting Ireland, so I'll be sure to put the Black Sheep hotel on our list ;) Thanks so much for sharing!!
Ali Dunnell said:
I really liked this blog post - it has a really timeless feel to it, as I guess Ireland has. It sounds like you had a lovely time in the Killarney. Thanks for sharing the experience :)
Andrea said:
What a fun read! Enjoy it!
Ana said:
Loved the tale. It really made me feel as a side witness to your whole story. Beautiful writing.
Victoria said:
Beer always helps when making new friends, haha! This brought back fond memories of Ireland..
Jasmine Caceres said:
This post gave me so many feels. Ireland, especially Killarney became my favorite place as soon as I arrived. I've never felt so relaxed and home somewhere than I did while I was exploring the Emerald Isle.
Sapna said:
While reading your post, I got so engrossed in it that I imagined myself sitting on that barstool and watching the bartender at work.
interNATionalcaty said:
Okay, that has to be best reason to visit Ireland. I bet the pubs are filled with excitement and of course who can resist the beers. Lastly, who can resist a pint with friends.
lisa said:
I loved the way you ended off your journey here which I totally agree with about where home is. I respect any solo female traveller, well done keep it up sounds like you having some great adventures.
Anu said:
Looks like Killarney is like Goa where the time just slows down, and where the relaxation is in air by default.
Michelle said:
I loved reading this! It sounds like you had a great time. I haven't been to Ireland yet, but we are in the process of planning a trip now, and this is exactly what I imagine it will be like! Thanks for sharing!