There is a theory called the third law of motion – for every action there is an equal and opposite re-action.

Though this concept is perhaps never meant to leave a physics classroom, I think it applies to life in general. Think about it…. How many times do we feel like things don’t go according to the plan, or we have those days when everything that could go wrong goes wrong? Sometimes we simply just feel disappointed because our expectations were too high to begin with.

But, usually there is a turning point. We may notice the ‘opposite reaction’ when things begin to improve and our luck turns up. I believe that sometimes if it weren’t for the initial negative event, the resulting positive event would never have occurred. This is exactly what happened during my road trip through the Drakensberg Mountain range in South Africa.

When my guesthouse reservation fell through and nearly every other B&B nearby were booked, I was forced to abandon my travel plans and ended up spontaneously booking at a place called the ‘Blyde River Wilderness Lodge’. As my GPS lead me deeper in the mountains than I actually anticipated going, I had that funny sensation I sometimes get while traveling; a feeling mixed with exhilaration, intuition and nervousness that rises up when you’ve completely ditched your itinerary and have allowed yourself to be led solely by a good-old-fashioned gut feeling.

I followed a narrow, sky-high road that acted as a median between a plummeting canyon and a jagged, towering wall of limestone. As I weaved around turns that tightly hugged the mountain, I flip-flopped between feeling amazed by the rugged peaks surrounding me and terrified that they could crumble down at any moment.

Eventually I reached a dirt road leading to the resort, and saw my first indication that my ‘gut feeling’ had paid off: a sign requesting guests to keep the gate closed due to the wildlife on the property. To this Canadian visiting Africa for the first time, a wildlife sighting felt as novel and exciting as it might to a young child; I was giddy with anticipation.

I checked into the ‘peacock room’, a cozy cottage situated opposite the reception and lounge area. 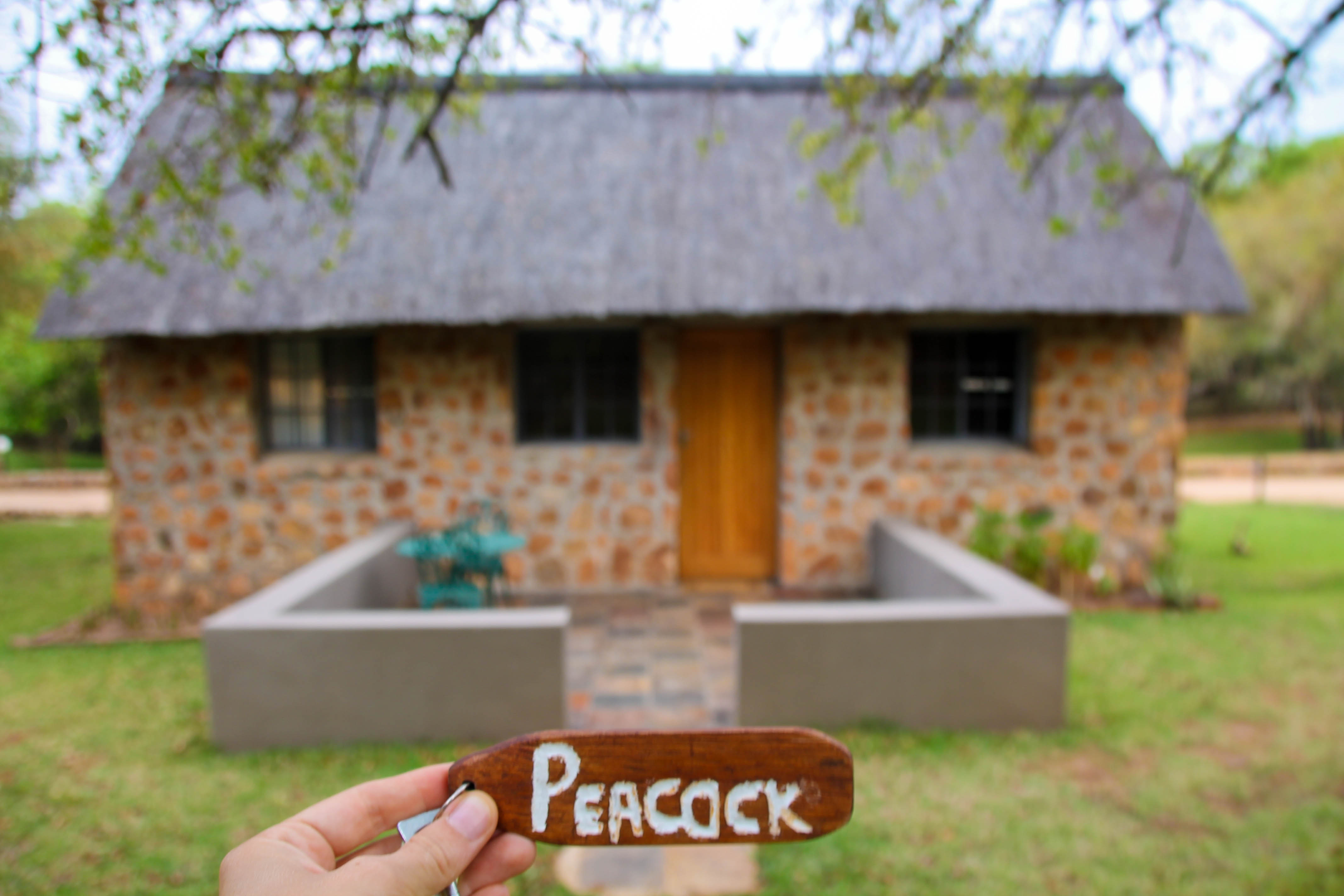 I decided to take a dip in the ‘rock pool’ to cool off and as I wandered towards it, I quickly found out how the ‘Peacock cottage’ got its name.

As I turned around the corner, I came face-to-face with a male peacock who was nonchalantly doing a lap around the cottage. I think we startled each other because he let out an ear-piercing call and I nearly jumped out of my skin!

After my swim, I was casually getting ready in my room for dinner and I noticed a female Nyala wandering outside my bathroom window. By the time I got my camera to follow her, she had caught up to her male companion: a bull grazing farther down towards the river.

I decided to continue on in pursuit of the animals with my camera in tow, and ran into John, the lodge’s owner and biologist. I was lucky enough to get introduced to the baby ostriches he rescued! At first I was apprehensive about getting too close to the birds, despite how small they were. I had never been up close to an ostrich before and wasn’t sure how friendly they were. But as we crouched down by their feed, they waddled right up to us.

Baby ostriches are both ridiculously cute and funny looking little creatures. These little guys sported large bald patches where their siblings had pecked away their feathers. 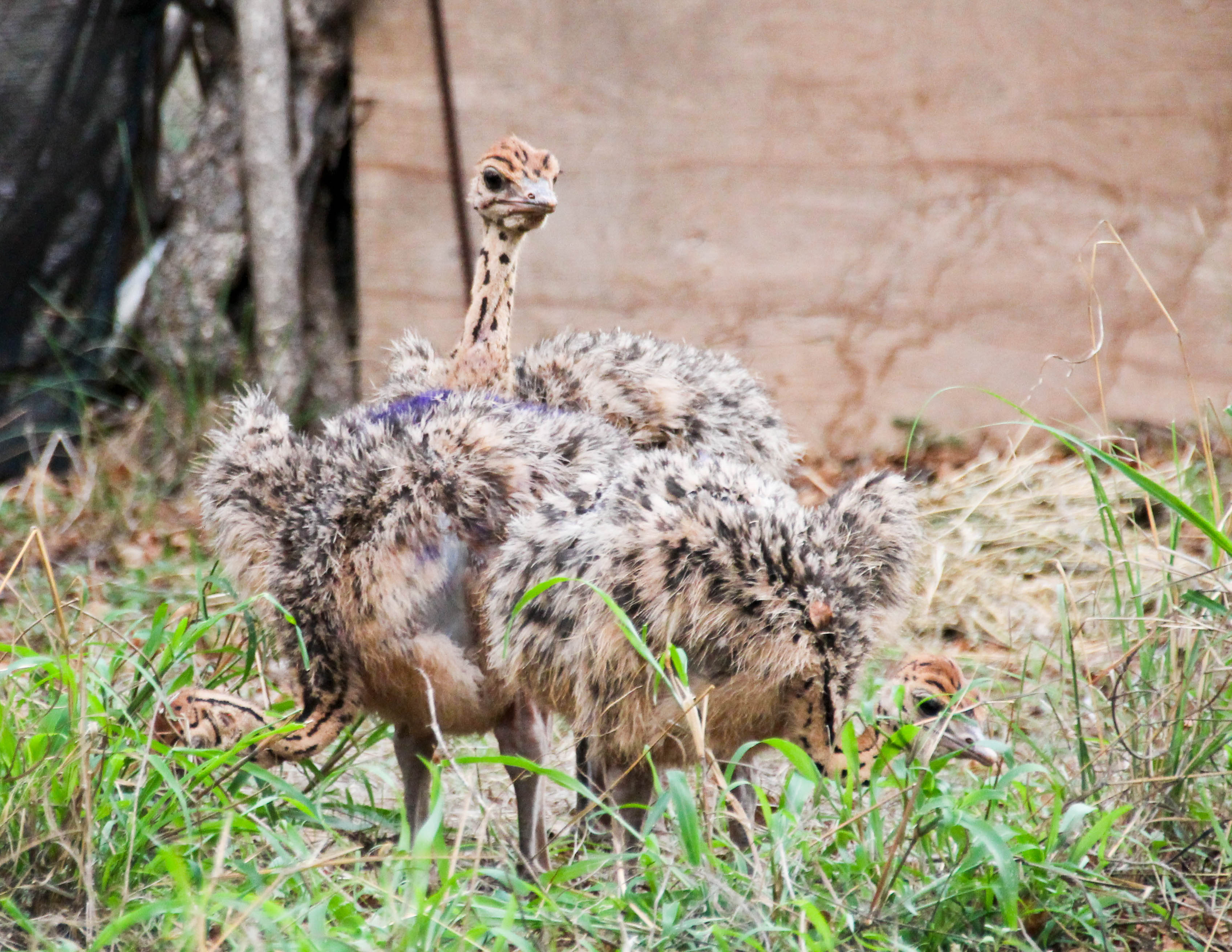 Shortly after this, John informed me that he had seen some zebras just outside the gate. I set off towards the gate in hot pursuit and noticed two zebras grazing at the side of the dirt path.

Thankfully John showed up, otherwise I would have been nervous to be in such close proximity to the animals. Though they appeared to be desensitized to a human’s presence, I wasn’t sure if I would unknowingly spook them or instigate aggression.

As we stood only 2 metres from the zebras, John informed me about the area’s ongoing drought; many animals in the region were starving and the zebras had difficulty finding enough food. Due to this, he had been occasionally feeding them from the horses’ reserves and allowed me to give them some food. At this point the zebra was staring at us, perhaps somehow aware of what we were talking about and approached even closer. 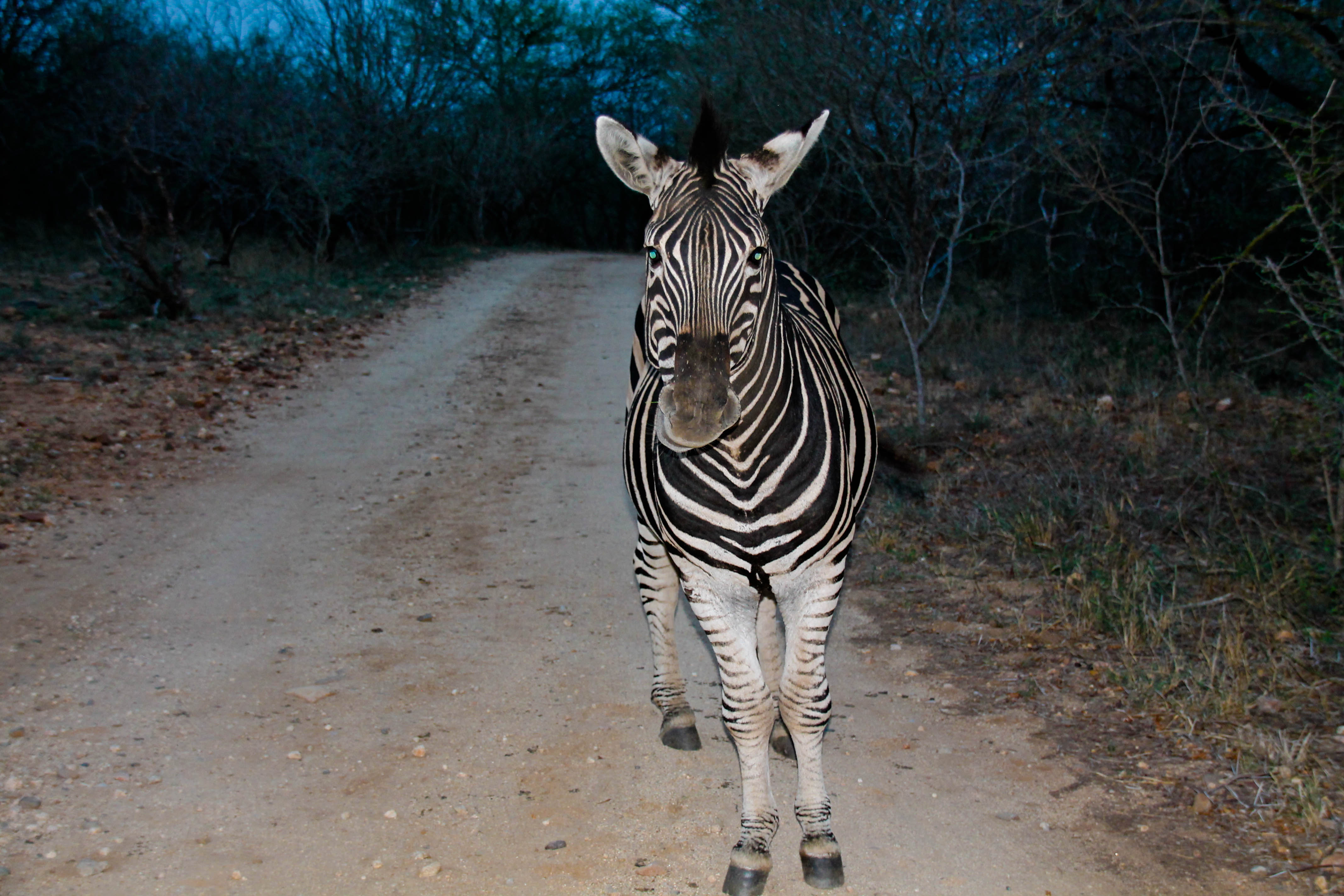 I awkwardly threw him some hay and stepped back, uncomfortable with the evaporating distance between us. “Is it true that every zebra’s stripes are unique?”, I asked. “Yes, like a finger print”, he said. I had only been at the resort for a few hours and I already felt a sense of marvel, like somehow the universe was offering me a reward.

That night dinner was served under the stars on an outdoor deck overlooking the Blyde River, a backdrop so stunning it could have been from a movie. Despite the contrary belief about solo travelers, I wasn’t lonely; sometimes I actually relish in those special moments of solitude because they are mine and mine alone to treasure. Sitting amidst the candlelight, I dreamily gazed up at the moon and got lost in my thoughts, wondering when was the last time I had even stopped to look up. I listened to the crickets and bullfrogs, a familiar music that created a wave of nostalgia from my nights in Tanzania. I savoured the food, frequently pausing to indulge in the luscious red wine I had ordered. It was a beautiful night that I won’t forget any time soon.

The next morning as I set off on the road again, I knew my luck must have still been on an upswing. Just ahead of my car was a pair of zebras and a group of giraffes. 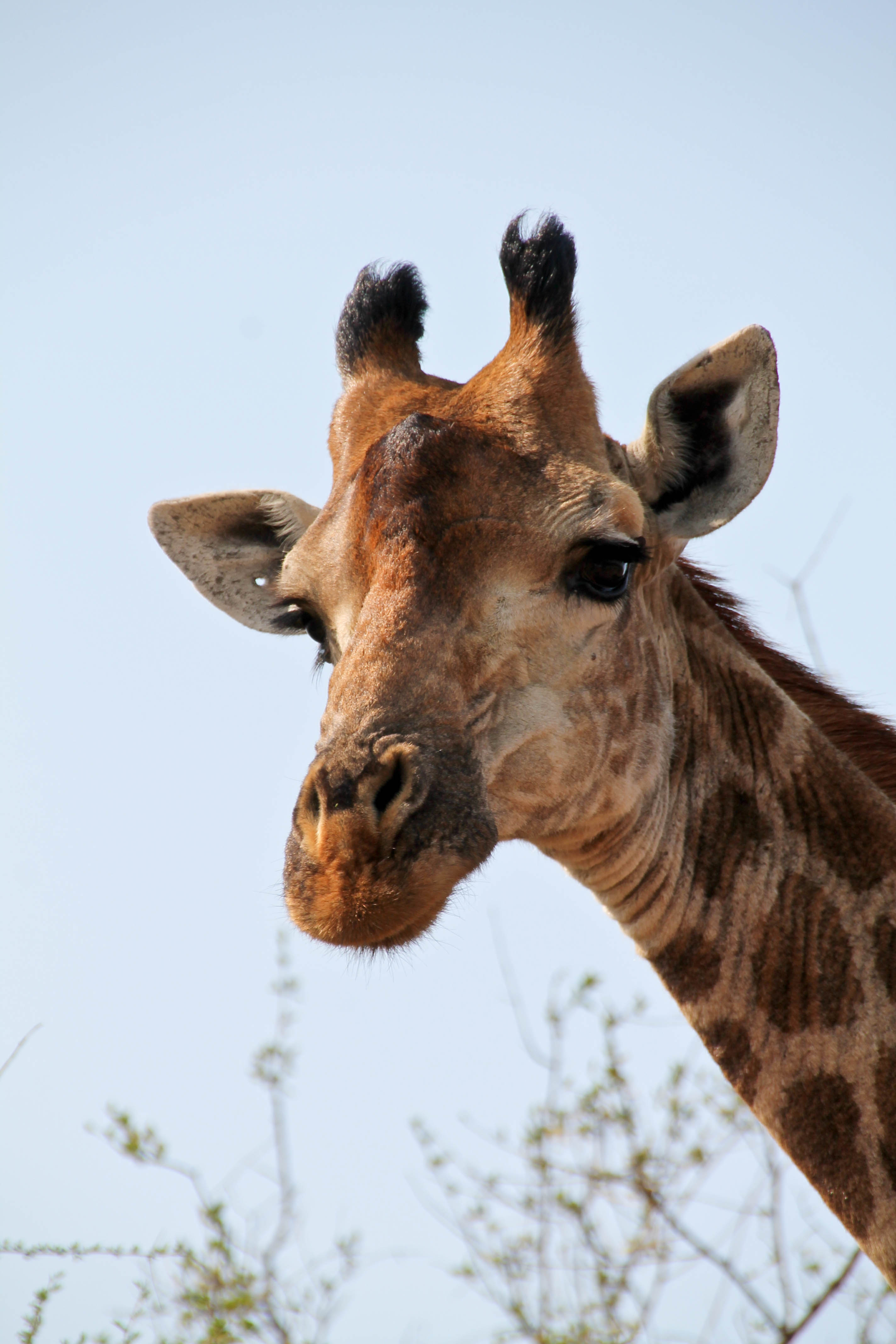 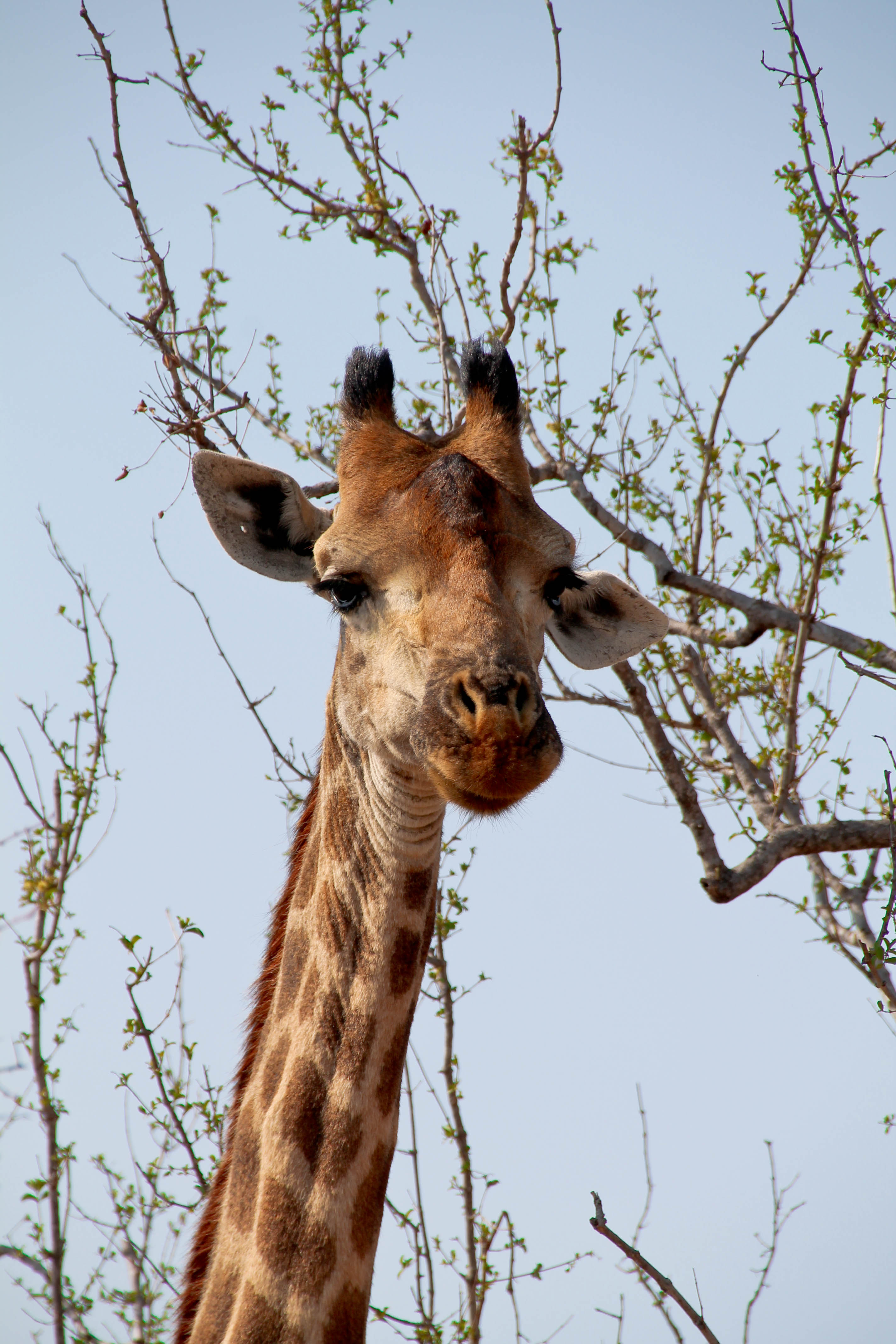 Through the bush, I could just barely make out two baby giraffes with ginger-coloured Mohawks springing up from their necks.

Though everyone had been telling me that I should have ventured farther to Kruger National Park to see the wildlife, I couldn’t help but laugh. There I sat in my tiny rental car with no other tourists in sight, watching zebras and giraffes from just a metre or two away – it was just meant to be! 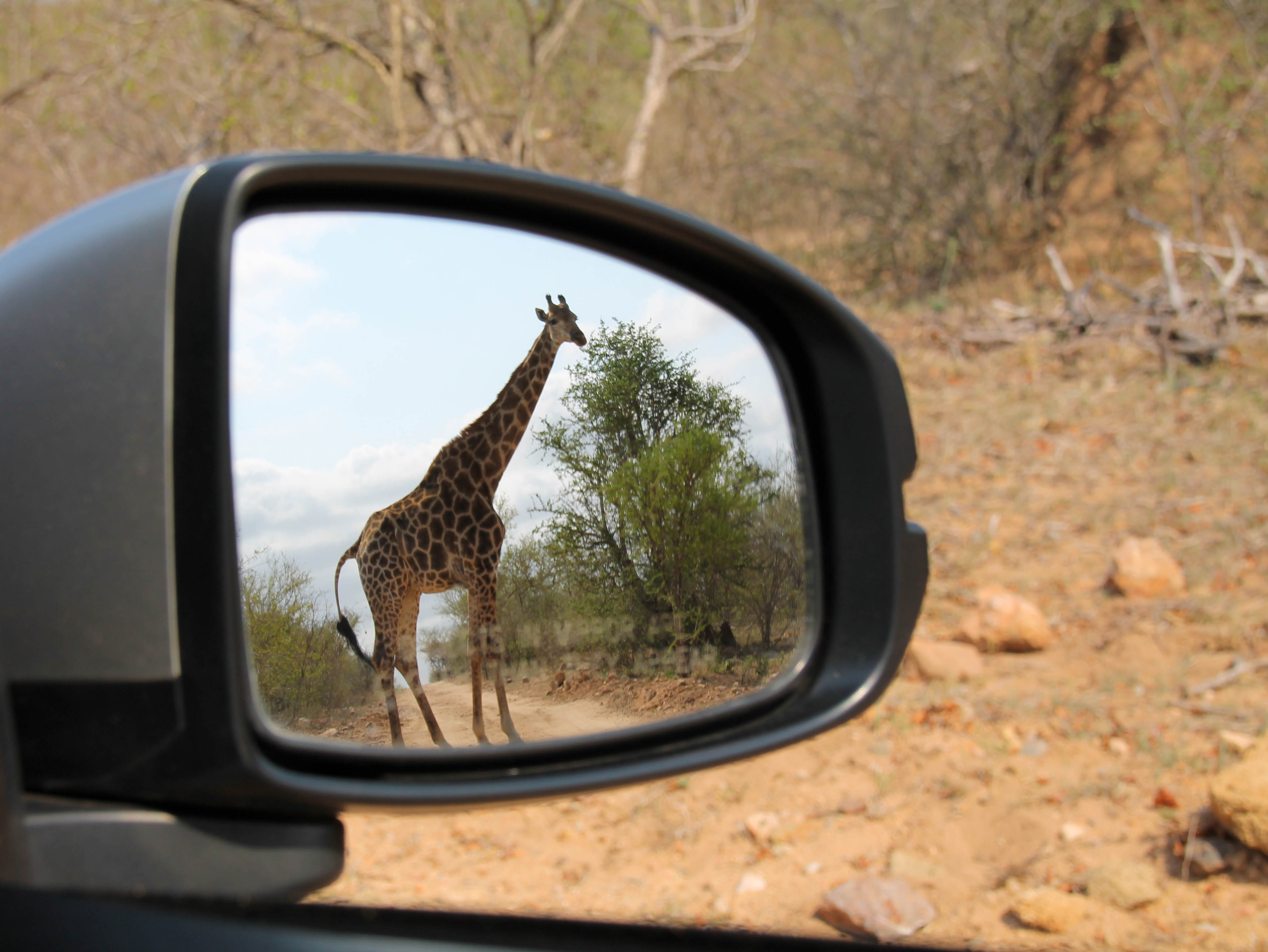 Whether physics is involved or not, the universe has a funny way of connecting the dots. My plans fell through and that initial action provided space for an even better reaction to occur, allowing me to be more spontaneous and intuitive. So perhaps when things go wrong, instead of dwelling on the negative, we should go with the flow; we can rest assured knowing we may be rewarded with something far better than we could have ever expected! 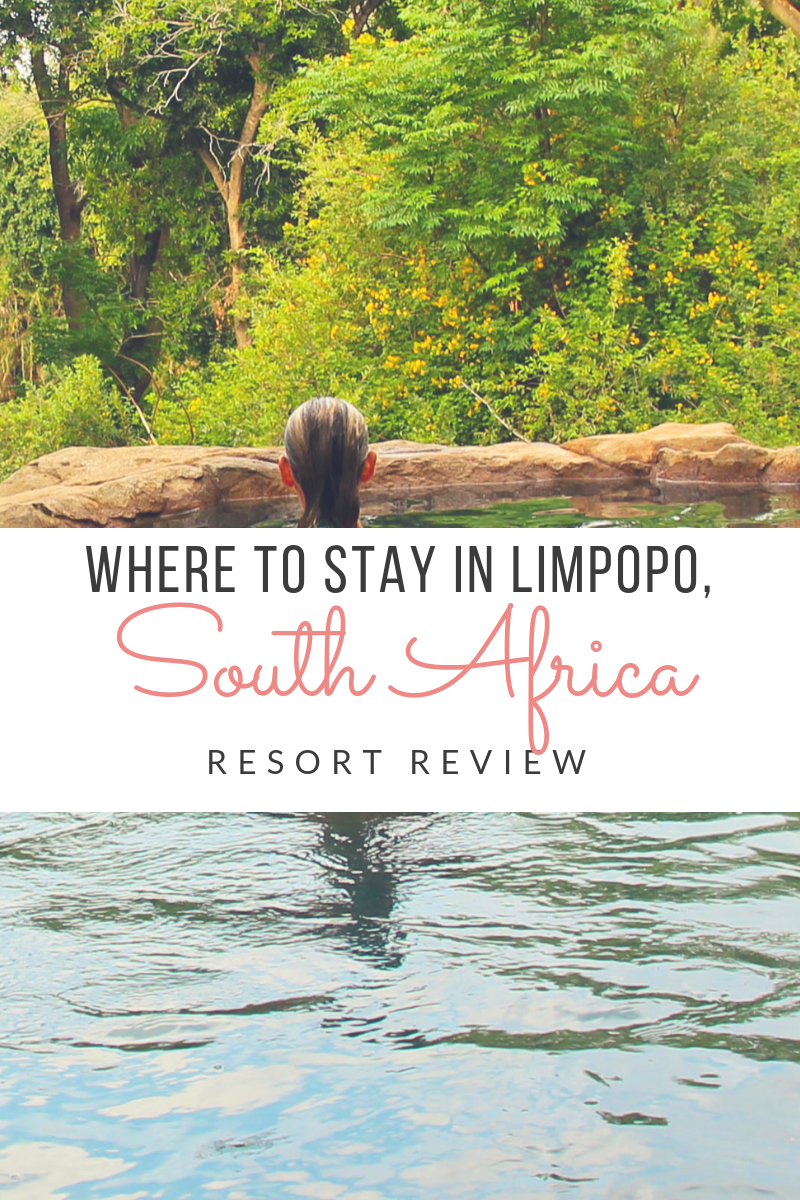 Isadora Koller said:
Sometimes the best adventures happen when we juts stop following the path and make our own way to the things. I bet this was an amazing experience for you. Since I was a kid I dream of going to Africa as I love animals way too much and would be so happy to see them in wild! I will save this post for the future because Ireally got interested in staying there!
Castaway with Crystal said:
WOW so many cool animals and I love the look of that spa thing, omg!!! Baby ostriches are adorable. That place looks cool as shit :)
Delilah said:
Seems like everything turned out for the better! You got to see so many different animals—really amazing! And even though you only stayed one night, you seem to have experienced a lot.
Sara Essop said:
That's what I love about my country , South Africa. You get to see wildlife in the most unexpected places and they're always beautiful. Thanks for the lodge recommendation.
Katrina Luder said:
I can't believe people were telling you to venture even further when you lucked out and saw all that amazing stuff! The peacocks and zebras were my fave... What an awesome experience! Added to the never ending bucket list ;)
Jen Ambrose said:
Absolutely stunning photos of the wildlife, I especially love the one of the giraffe!
Vrithi Pushkar said:
Love peacocks! South Africa is on my bucket list. I am saving your post for when i go.
Kelly said:
Ummm... this is amazing!!! Can I move here now please?? Lol. And the wildlife shots are fabtastic. Definitely on my bucket list for sure.
Brooklyn Murtaugh said:
Sometimes travel plans need to fall through to get amazing experiences like this one. That rock pool looks so relaxing. And how cute were the baby giraffes?! :)
Julia Dent said:
Those baby ostriches are so cute! This sounds like such a fun experience! :)