Friends in Low Places: Getting Stuck in a Ditch and a 35K Car Rental 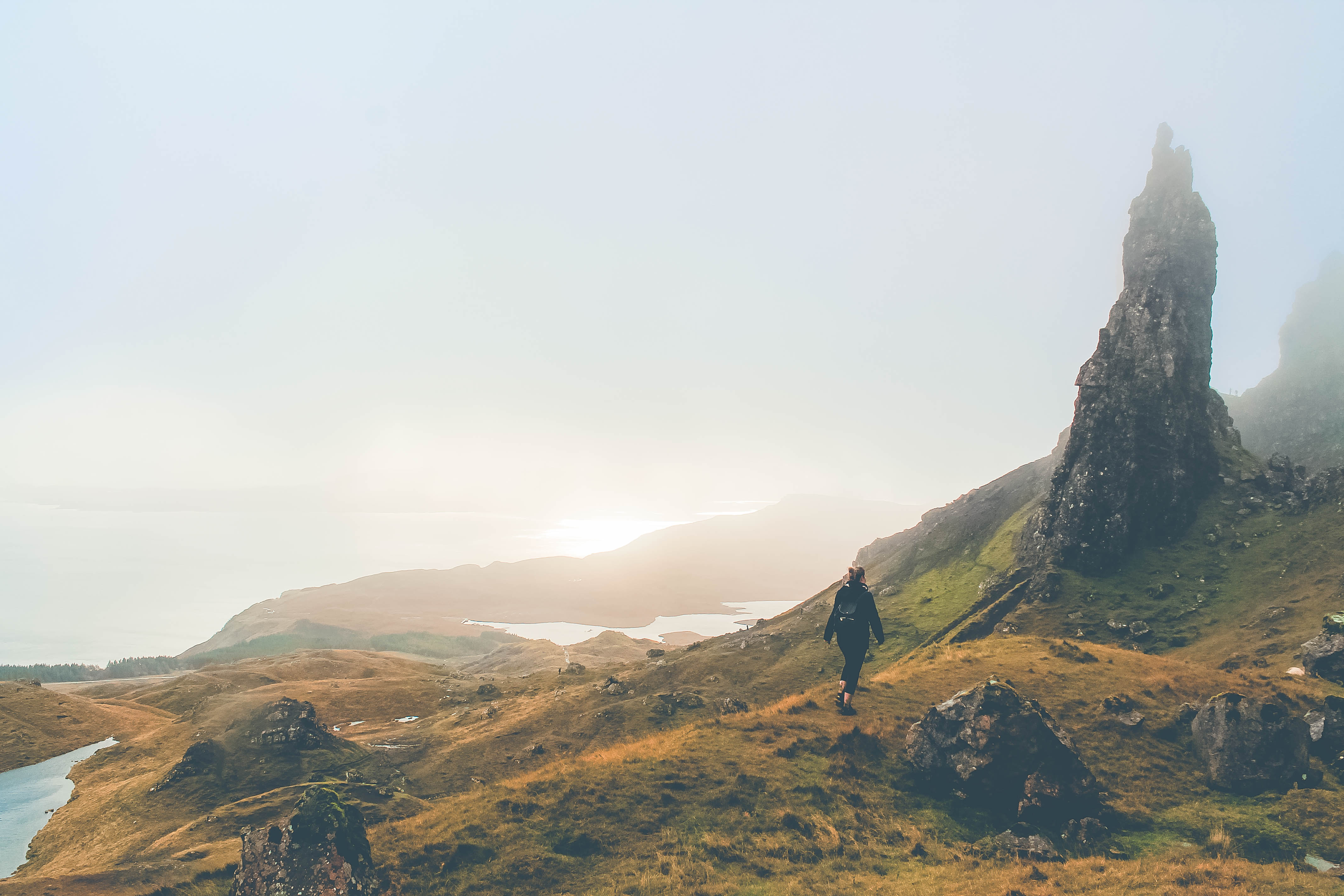 Exploring the Isle of Skye (before shit hit the fan..)

It was just past 7:00 in the morning, but I was feeling anything but bright-eyed. I’d just landed in Glasgow, after spending the night in Dublin’s international terminal. Sleeping in airports has become somewhat of a norm in my world: a combination of my insane travel frugality and an occupational hazard that comes with the budget traveler territory.

I was on a mission to see some of the best places to visit in Scotland. Eager to get on the road and find a coffee the size of Texas, I quickly navigated to my rental car company’s shuttle stop. I sat on my backpack a few metres from the sign, wearily attempting to pull up my reservation on my iphone.

The jetlag must have been real because I didn’t notice the van pull up until I heard a harsh voice bark out, “HUFFFFFFF…passenger HUFF!”.

I shot up and less-than-gracefully lunged towards the van as my driver (a slightly intimidating, hulk-of-a-man) glared at me with contempt. When we arrived at the rental agency, I had barely opened the sliding van door before his hairy arms were reaching across me to unload bags. Not the best first impression, but I had gotten my booking for such a steal that I would ignore the driver’s gruff.

I was already a little anxious about driving in Scotland (on the wrong side of the road, might I add) in my sleep-deprived state. As I checked in at the front desk, I had horrible images of myself circling uncontrollably around multi-lane roundabouts, unable to merge lanes to get off. Thankfully my credit card has pretty comprehensive car rental insurance, so all the horrifying scenarios my jet-lagged brain had conjured up, would at least be covered if they came to fruition – or at least so I had thought…

“Miss, that will be 35 thousand pounds”.

I snapped back to reality from my tragic round-about daydream and stared, blankly, at the man behind the desk. Suddenly everything had gone quiet; I could hear the blood rushing through my head. I swear to you, the awkward silence was so thick you might have even heard crickets, chirping in the background.

“Yes, miss…we require a deposit equal to the value of the car”.

You know those people who react super inappropriately in awkward or tense situations? Hi, welcome to my life.

I started laughing…giggling uncontrollably. Apparently, all the late pub nights the prior week in Killarney and my sleepless night on a concrete airport floor had finally gotten to me. I had snapped.

Uhhh oh. I had downgraded from Miss to M’am. I knew I was being ridiculous but I couldn’t help it; after all, this had to be a joke – right?! My fit of inappropriate laughter had finally waned, but the damage had already been done. The customer service representative did not look impressed.

In a matter-of-fact tone, he stated, “You declined car insurance on the booking, so we require a deposit equal to the value of the car. Your rental car is worth approximately 35 thousand pounds, so we need to place a hold on your credit card for the same amount – 35 thousand pounds”.

I tried to explain that I already had rental car insurance through my credit card; I told him the average person didn’t even own a credit card with such an absorbent limit; I tried to negotiate an alternative agreement; I apologized for laughing and explained that I hadn’t slept in days.

Still in disbelief, I cut my losses and walked away, eventually finding a more appropriate rental car agreement at the airport’s in-house Enterprise. Little did I know, just days later I would end up stuck in a Highland ditch, thanking my lucky stars I wasn’t in the 35 thousand pound car.

Let’s fast-forward a couple days for this to make more sense. 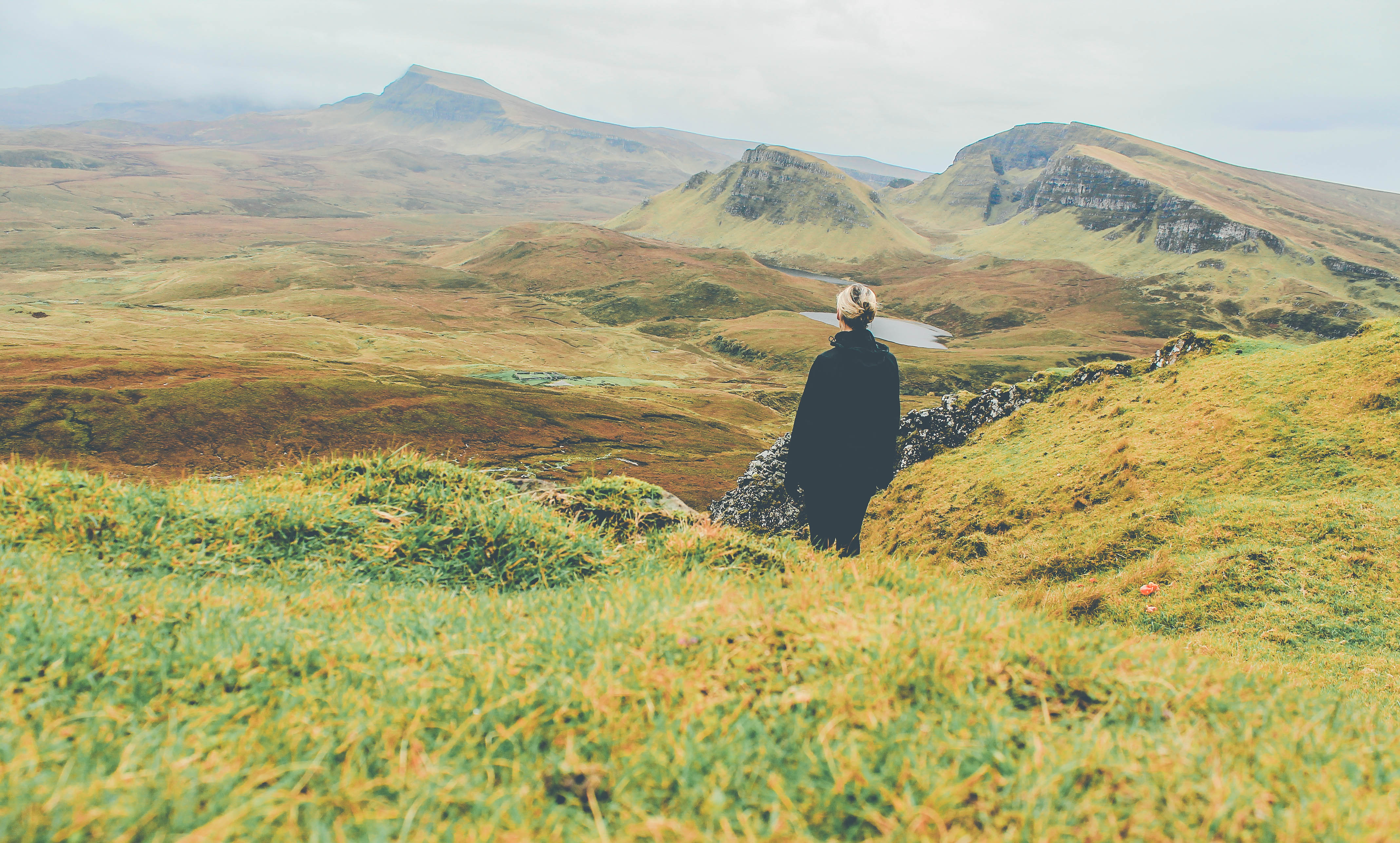 Exploring the Isle of Skye (before the accident)

I’d been driving all day and our mission to find Scottish standing stones was becoming pretty bleak. With zero cell service, we had succumbed to the navigational strategy drivers relied on decades before GPS – paper maps. I was sure we inadvertently gone in the wrong direction, and now it was raining (again).

Along the west coast of the Isle of Skye, narrow, single track roads were common – though not something I could get used to. How can one place be so beautiful, yet harrowing? Each time we made our way around the tight, winding corners of the treacherous costal roads, I silently prayed we wouldn’t come face-to-face with another speeding vehicle.

But eventually it happened.

Just as the sun was beginning to come out again and I could breathe a little easier, a transport truck appeared from around a blind corner…headed straight for us.

What would you do on a single-track road, with a Mac truck barreling towards you?

I did what any sane person would do…I got the heck out of the way. We ended up in the ditch, unscathed but stuck; trapped in the middle of nowhere, without cell service to be more exact.

The truck driver slowed to a halt and we looked up at him from our lowly position in the ditch. I worried I had broken some invisible, unspoken rule of the single-track road and was about to get yelled at for my idiocy. He hopped down from the cab of his giant truck and marched over to us, as I rolled down the window.

“Here we go”, I thought myself, preparing for the worst.

Suddenly he broke out into a wide-toothed grin. “Are yah okay lassies?”, he asked in his thick Scottish accent.

Thankfully this bloke was burly; he merely sat on the boot of the car while I gunned the gas in reverse, and it was enough to shift the vehicle’s weight backwards, helping us escape from the ditch. By some form of witchcraft, there was no damage – not even one scratch!

At his request, we snapped a quick selfie. “My boss is never going to believe this; I need a photo to prove it”, he joked. 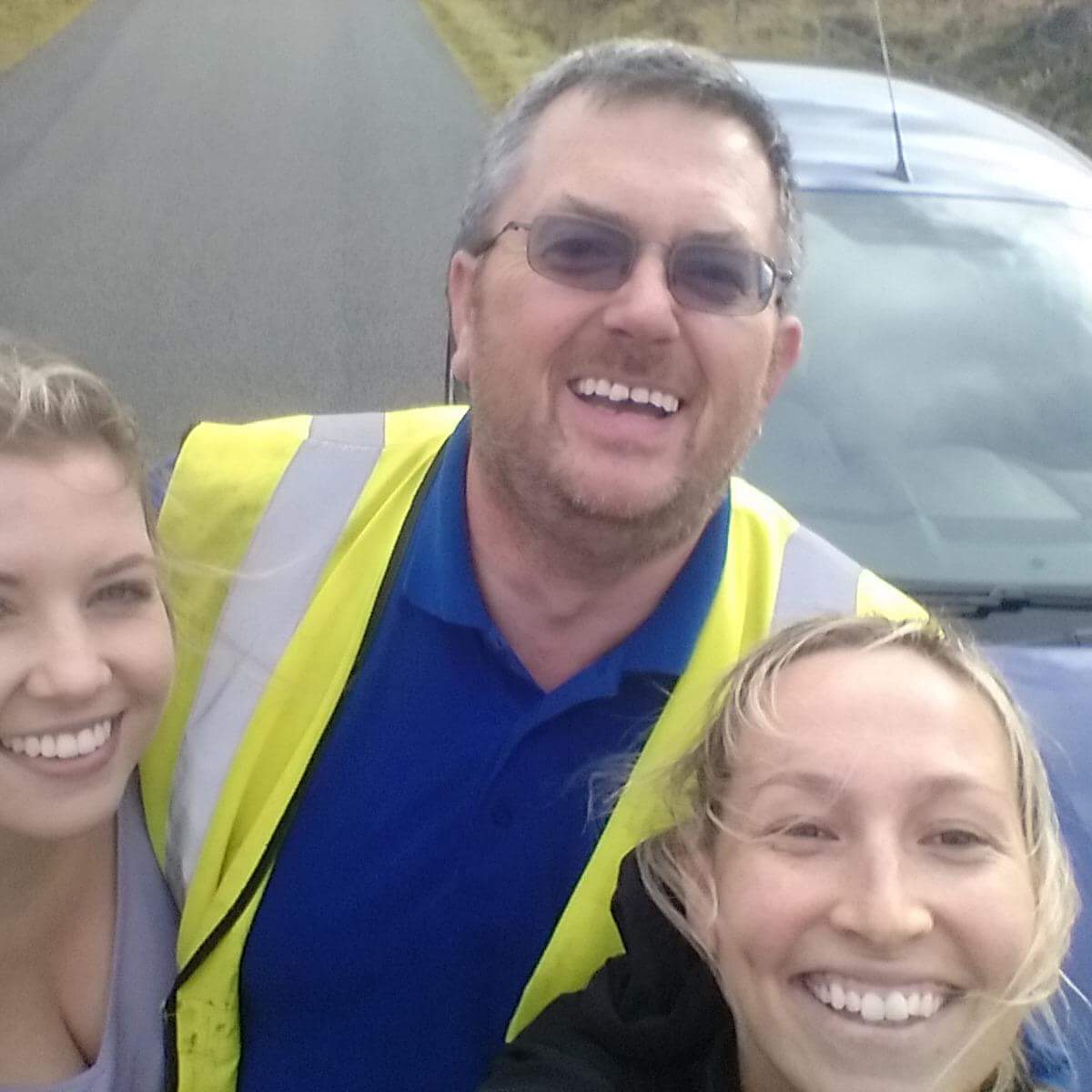 All smiles after the car was back on the road!

As we exchanged Facebook contact information (and are still in contact to this day). I laughed to myself, thinking you never really know where you might meet a new friend – even from the lowly pits of a Scottish ditch. 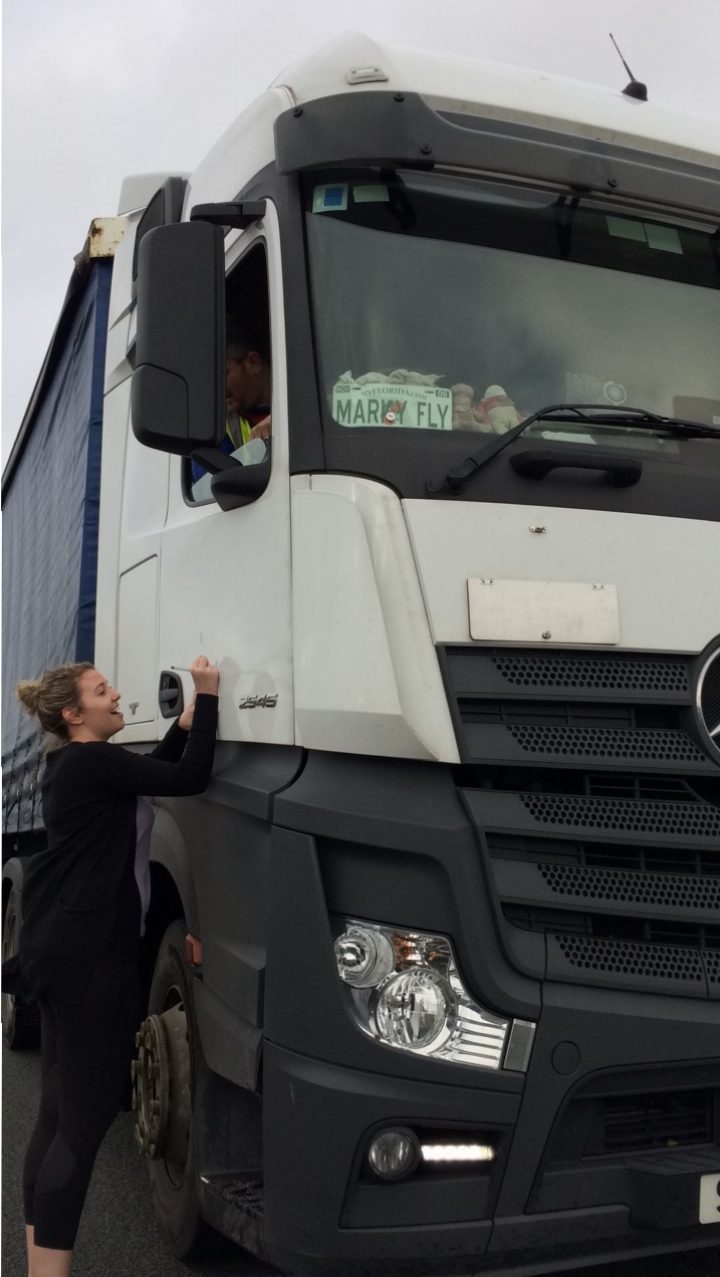 I guess you could say, things have a way of working themselves out just fine. 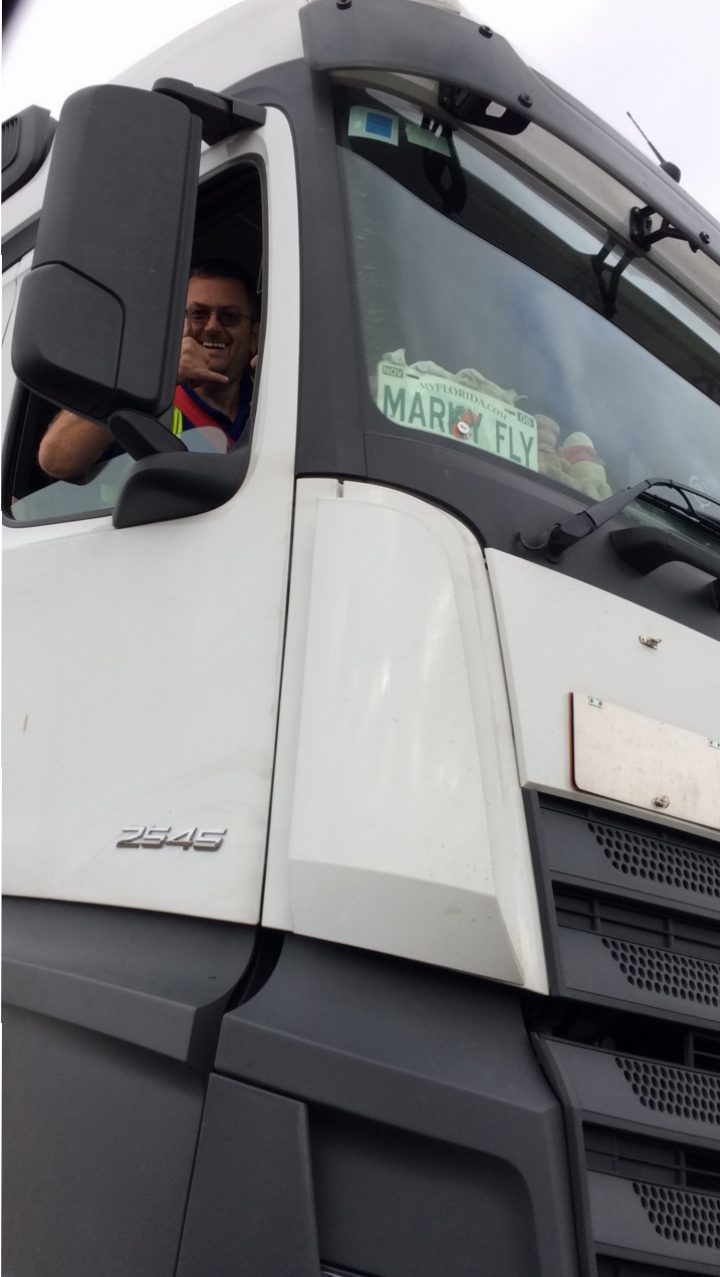 In the spirit of transparency, the 35K car rental agency was EasiRent.

For obvious reasons, I would not recommend them. 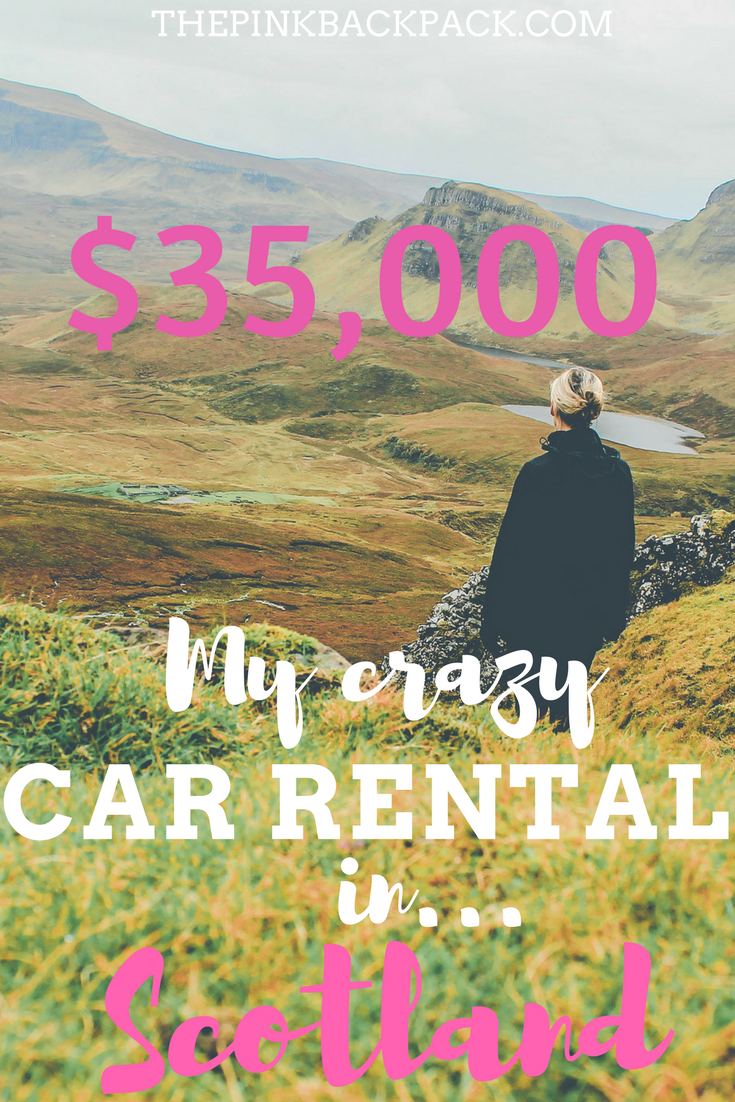 Finding Home Through a Pint Glass

Sandy said:
$35 thousand pounds??? WHAT. Surely they can come up with a better policy, like maybe not allowing it to be leased without insurance? duh hahaha great story and glad it didn't turn out worse <3
Cherene Saradar said:
OMG what a story! I can't believe they wanted you to give them that much of a deposit. Also the way you met your new friend. Great read!
Isadora Koller said:
This is the happiest accident story I ever heard hahahaha but now, come on, 35k for renting a car? This sounds completely insane!
Annie said:
Ha! Sums up our British way completely LOL! One minute having stupid rules and exorbitant prices, next super friendly peeps helping damsels in distress. A nice highland fling that didn't end in disaster :)
thepinkbackpack.com said:
That's what I thought!!! My gut was telling me this place was shady; I've never experienced something like this and I've rented cars all over the world, so I left and found a different rental. The cherry on the cake is that they never refunded me my initial booking cost. Moral of the story: Avoid Easi Rent in the UK!
thepinkbackpack.com said:
lol right?! Definitely makes for a good story!
Christina said:
OMG what! I would have been having a giggle-breakdown right next to you. What kind of wacko policy is that?? Glad you got a different car though and that everything was fine in the end despite the ditch incident ;) makes for a good story at least, right? haha
Anne said:
I'm no expert, but I thought if you already had insurance for something you weren't allowed to get a second policy on the same thing. And £35k?? What kind of car was it to be worth that much? Sounds like a scam to me.